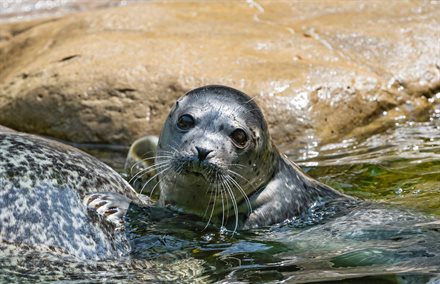 If you happen to be in Cornwall on the southwestern tip of England and you see an adorable newborn seal resting on the beach, do the world (and especially the seal) a favor and LEAVE IT ALONE.

Authorities in the area have had to issue a similar warning because baby seals kept getting herded into the water by well-meaning but wrong-headed tourists who assumed that the furry pups had been abandoned by their mothers on the sand.

In fact, it's completely normal for seal pups to doze on the shore while their mothers watch them from the sea, and human interference does more damage than good. Not only can it break the maternal bond, but the animals have been known to bite and spread harmful bacteria.

Delia Webb, a biological scientist with the Friends of Portheras Cove, says one pup, nicknamed Snoozy, "suffered terribly by being harassed by beachgoers," and marine medics had to be called out twice in one afternoon to assess his condition.

He's doing fine now, but could use a little peace and quiet. As Jezebel put it, "Please just let Snoozy snooze."