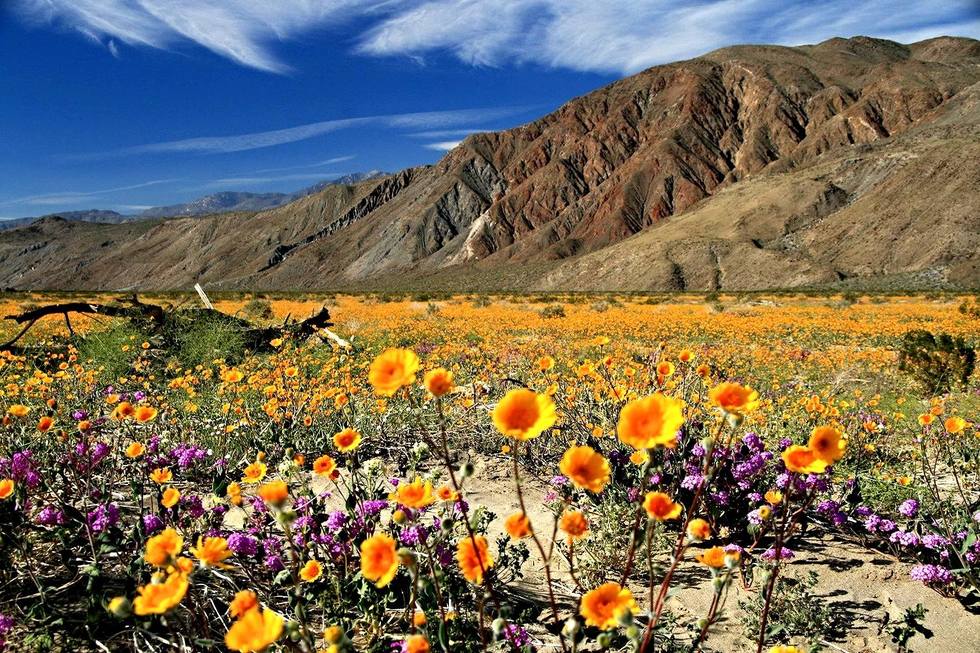 Superbloom may sound like the name of a '90s rock band to you, but in Borrego Springs, California, it means millions of rare wildflowers carpeting thousands of acres of desert. And Superbloom is coming soon.

In California's ecosystem, seeds might hide dormant for years until conditions are perfect, and this year, there are signs they have been awakened by recent wildfires and intense rains. Conditions are ideal for a mass bloom.
Wild poppies, verbena, lilies, primroses, and flowering prickly pears are just some of the desert species expected to weave a blanket of color across Anza-Borrego State Park. The 630,000-acre reserve, the largest state park in California, is usually a red-rock sandscape. But in superbloom, the badlands burst with brilliant fuscia and orange.


The last superbloom, in 2017, caught locals by surprise and attracted nearly 500,000 visitors to the tiny community that serves the park, which is two hours from San Diego and three hours from Los Angeles.
The superbloom of ’17 (pictured) was so popular that the town of Borrego Springs, home to just 3,500 residents, couldn't cope with the influx. Locals dubbed that season Flowergeddon, as the town's 12 restaurants and lone gas station were clogged bumper-to-bumper. This year, Borrego Springs is prepared for the deluge of petal-peepers—it even opened an additional gas station.
The height of the bloom will probably take place in early March and last until early April.

If you want to avoid crowds and potential traffic jams, call the Wildflower Hotline at 760/767-4684 for daily updates about which flowers are popping and where.


For more ideas for road trips to big-bloom areas around the world, see our photo feature on the world's most beautiful spring flowers.
Local Experiences
Outdoor & Adventure
Road Trips