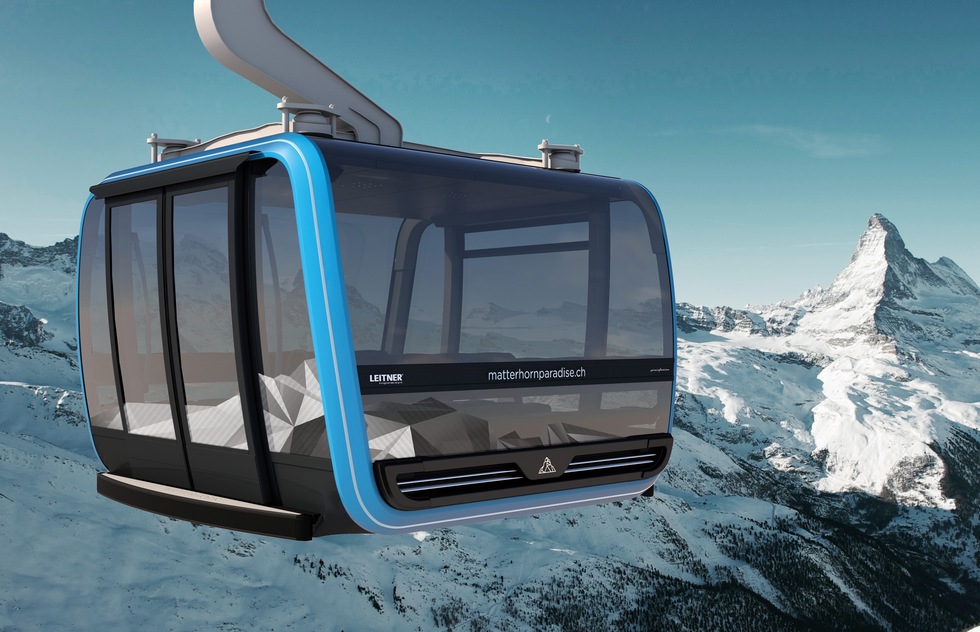 Temperatures that plummet 20 degrees below zero. A hostile, windy crag 2.5 miles (4,000 m) high, totally devoid of trees. Air so thin that people can only wheeze, creeping around at 60% of their normal abilities.

It's not hell. It's Switzerland!

Those are the conditions that workers endured to give the Alps a new wonder: luxury gondolas on the Matterhorn Glacier Ride, the world's highest cableway. Beginning September 29, the new US $54 million gondola flies over cliffs and ice from the existing Trockener Steg cableway station to what's called the Matterhorn glacier paradise, which is a natural grotto in the world's highest glacier—and a tourist attraction that's about to get a lot busier, thanks to the new gondola, which can increase visitorship by 2,000 people an hour.

But the height is, of course, the biggest reason why you'd want to go to this inhospitable spot on Klein Matterhorn. From the platform at the top station, on a clear day you can get a view of 38 mighty peaks of the Alps in a 360-degree panorama that includes Switzerland, France, and Italy.

You can also get frostbite. That's why the gondolas are enclosed, cozy, and warm, with huge wraparound windows to enjoy the spectacle in comfort. More than comfort, actually—opulence. The old cableway to Klein Matterhorn, almost 40 years old now, is as dull as riding in a Honda Accord.

These new cabins are built to indulge the rich. Called a 3S cableway, it's like the iPhones of tramways. They were designed by the Pininfarina studio, which also works on Maserati and Ferrari. If there was any doubt about the luxury image the builders are going for (in, um, a gondola), they announced that "five 'Crystal ride' cabins are decorated with Swarovski crystals, capturing the light in an effect that will amaze passengers and provide an unforgettable adrenaline rush." (In case, you know, dangling by a slender cable over the frozen Alps isn't enough for you, you can pay to ride with some crystals for a true rush.) The biggest rush, though, happens in the hearts of the builders, because to ride this, you have to pay about US $100.

It's all part of a new cableway system that, when finished in 2021, will shuttle tourists between northern Italy and Zermatt, Switzerland, over the Klein Matterhorn. The final network will connect the Ayas Valley in Italy with the ski resorts of Zermatt, resulting in the largest continuous skiing area on the planet—just imagine a combined 373 miles (600 km) of ski slopes.

If the tallest gondola isn't impressive enough for you, how about one you don't need to plug in?

At Staubern mountain in Eastern Switzerland, between St. Gallen and Appenzell (about 90 minutes from Zurich), the Cable Car Frümsen-Staubern just became the world's first to run on solar power. It's much milder, more conventional, and comfortably below the timber line, with plenty of oxygen to go around. You'll have to bring your own Swarovski for that one, though.

And those are just two of the peak developments in Switzerland. For a lot more ideas about great Alps to scale by gondola, check out Frommer's' recent feature about three Swiss mountains that anyone can go up, no matter their fitness level.

Unfortunately, the lift situation in neighboring France is moving backward. On Tuesday, a fire wrecked a main cable car line at Chamonix, one of Europe's most popular ski resorts. A blaze broke out during some off-season maintenance work at Lognan station, the middle point of the Lognan and Grands Montets cable cars. No one is sure if repairs can be made in time for winter.