Sydney Gets Lit: Vivid Sydney 2014 Brightens Up the Harbour 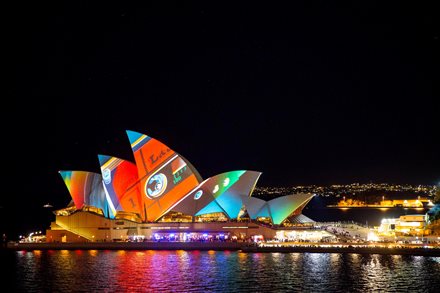 Even on the dullest day, Sydney is a vibrant city. But from May 24 to June 10 Sydney will get “Vivid.”

The concept of light bulb as idea icon is also in play.  The festival, which is sponsored by Intel along with Destination NSW, includes 300 idea generators speaking at 200 creative events around the city. Creative lights include musicians like the Pet Shop Boys, Pixies, The Liars, Lauryn Hill and Giorgio Moroder (remember those soundtracks for American Gigolo and Flashdance in the 80s?) who will all be performing at the festival.

Sci Fi geeks take note: Doctor Who fans who are celebrating the teleportation wizard’s 50th anniversary can look forward to a Doctor Who 3D-mapped projection show on the façade of Customs House at Circular Quay. Festival goers will be able to see The Doctor pursued by some of his favorite villains including those nasty little Daleks. The Doctor Who projections are set to be displayed at six intervals at night on Saturday June 1, accompanied by music from the now 50-year-old TV show.

The show of lights and creative brilliance has been a Sydney favorite since its inauguration in 2009.

Locals say it's just getting brighter and brighter.