(This is part 2 of a series of, well, snippets. They're random, but I hope interesting, impressions of what I experienced recently in Taiwan). 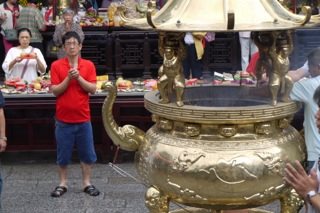 What I learned today in Taiwan:

1) If you want a latte you can go to Cursive Coffee or Let's Cafe! But you'll probably go to Starbucks because they're everywhere

2) Many of the hookers here are older than me. I was walking down a back alley with Michelle (who is Taiwanese) and she pointed to two frazzled looking women in their late 50's, early 60's and told me they were prostitutes. I expressed surprise that they weren't younger, or at least that they didn't look younger. She said that these were the hookers for the older men and that there are younger ones for the younger men. Somehow I found this heartening.

3) People in Taiwan have to bury their relatives twice. The first time, there's a big parade with dancers and floats and then a party. At Michelle's grandfather's party, the dancers turned out to be strippers because Grandad loved strippers and it was important to send him off right (his body was in the room where the party was going on). Then 7 years later, they dig up the body so that the bones can be placed in a tiled mausoleum.