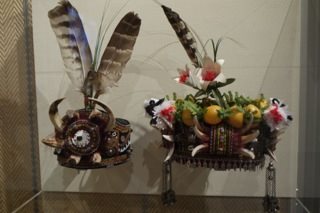 1) I discovered that selfies are evolving in Taiwan (and perhaps in Asia in general). Instead of posing doing the double "peace sign", I saw a couple of people posing "thumbs up". This is so their friends will "like" their photos on FB. (Sigh). Also, some taking selfies had "selfie sticks"—long, metal retractable poles (that can collapse to purse size) specially designed to clasp a cell phone at the end, so that the camera can be set farther than arm's length away.

2) I went to an aboriginal village, and in the middle of the "kill me I'm so bored" tourist dance show, someone actually got killed. During the "warrior dance" one of the warriors pushed another behind a barrier (so we couldn't see his opponent's head or body) and, with a big scream, brought his knife crashing down. Then, with triumphal yells, he pulled out a plastic head, dripping with fake blood. Turned out the tribe putting on the show used to be headhunters. For a man to come of age in this tribe, he had to kill someone (outside the tribe). When that happened, he was given a facial tattoo (so that his ancestors would welcome him into heaven; no entry without tattoo) and he was able to get married (again, only killers were allowed to get married). We saw him getting the tattoo, and then the entire audience had to put on headdresses and get on stage to dance at the dude's wedding.

3) At the Aboriginal Museum in the village I learned about other tribes in Taiwan (they make up 2% of the population). The largest tribe are the Ami. They're a matriarchal society, which means that the women own the property. If a woman decides she's not happy with her marriage, she can throw her husband's ceremonial knife outside the house, a symbol that she's divorced him. There's nothing the men can throw, only the women get to choose to divorce.

4) We went to a small village where you can write wishes on paper lanterns, light them and send them aloft. Originally, the lanterns were used to send messages or warn of illness in a town. My lantern was in four colors, for career, marriage, success and happiness. I can't say here what I wished for, but it would be good for ALL of us if it came true!