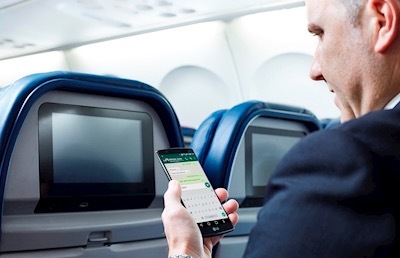 Texting Is Now Free on Delta: Here's How It Works

Delta Air Lines has announced that starting this weekend, passengers on 90% of its flights will be able to use the carrier's in-flight Wi-Fi network to text with people on the ground for free.

The service will be text-only—no videos or photos. To use it, passengers must access the signal using the Gogo app, which you can get at airborne.gogoinflight.com. Texting will then only be permitted via WhatsApp, Facebook Messenger, and Apple's iMessage.

Out of 1,300 Delta planes, only 130 will not have the feature. Essentially, if a plane has more than one cabin of seating, it will have free texting.

Of course, other airlines have free Wi-Fi, enabling communication with the ground, and some restrict the privilege to customers who subscribe to partner companies, but in a press release Delta touts itself as the first carrier so equipped among U.S.-based airlines operating trans-oceanic routes. (Basically, that makes it the first of the Big Three.) Delta tried doing this a few years ago, only to rescind the plan a month later. This time, bandwidth has improved to the point where the airline thinks it can handle the burden of free texting.

Following the announcement, the CEO of Delta said he would never allow voice calls on his flights as long as he's in charge.

Now that Delta has us using our mobile phones for everything from check-in to mid-flight texting, how about adding recharging ports at every seat?
Air Travel
News