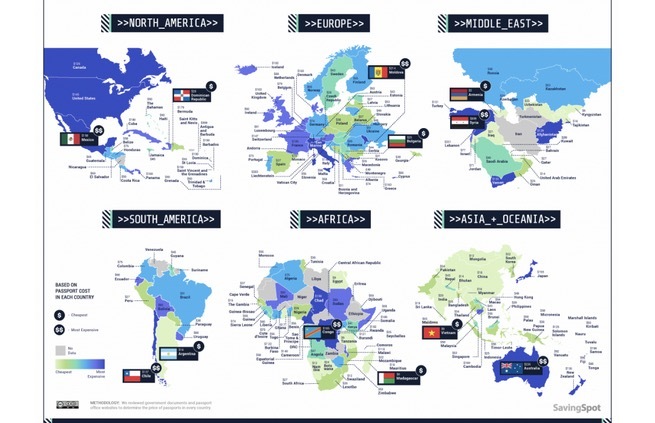 The Best and Worst Passports on the Planet, By Cost and Power

Fewer than 50% of Americans have passports—a surprisingly low percentage. Some people blame the price of the document, which is currently $145 for a new application or $110 to renew.

A fascinating survey by online lender CashNetUSA breaks down which citizens of the world are in the best position to afford a passport—and thus travel—and which ones must pay an unconscionable percentage of their weekly salary for one.

While the American passport is one of the world’s priciest, it’s comparatively affordable when taken in the context of average American hourly wages.

According to this survey, the typical U.S. or Canadian citizen must work for four and a half hours to earn enough to pay off passport fees. That's less than a quarter of what a Mexican citizen has to work, and it's far less than those who live in many parts of the Caribbean and Central America (see infographic below). 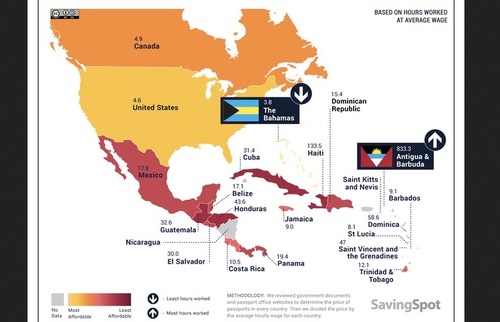 According to CashNetUSA, the citizens with the most reason to complain are Syrians: A new passport there costs the equivalent of US$800. Tellingly, the document cost just $9 a decade ago, but as the survey notes, "the complex political situation, corruption, the physical destruction of border crossings, and the western fear of refugees have all inflated the cost of traveling for ordinary Syrian people."

The people of Antigua and Barbuda also have a rough budgetary relationship with their passports, which cost $300. Because of low wages in that Caribbean island nation, it takes 833 hours for an average citizen to earn enough to pay for the document. That’s the third-highest number of hours needed to buy a passport worldwide, after the African nations of Congo and Malawi.

The cheapest passport in the world? You can’t beat free! The government of Madagascar, off the coast of Africa, supplies its citizens with passports at no cost whatsoever.

In that category, Japanese and Singaporean passports are the most "powerful" because they're accepted in the most places; they gain entry to 191 and 190 countries, respectively. The passports in South Korea and in many European countries come next on the power ranking.

During the period right before the pandemic, the United States was in sixth place when it came to the number of countries Americans could visit without a visa, but because of the USA's high Covid-19 rates, that ranking is in flux now.

So what is a passport really worth, in a philosophical sense? I think the value of a passport is limitless. It's the key that unlocks international friendships, the best sort of education, and adventures galore. I can't wait to use mine again in the near future.