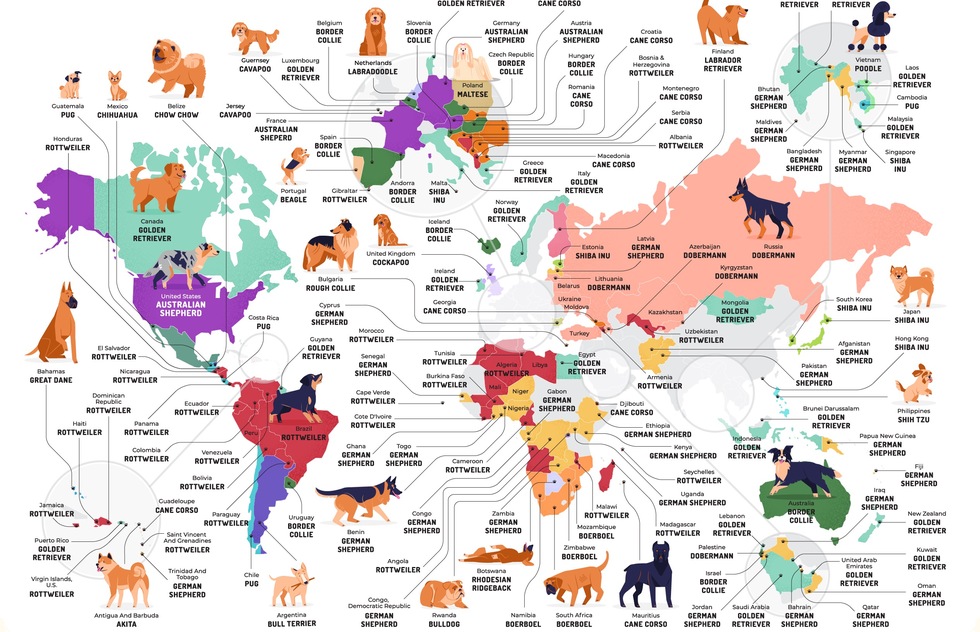 The Most Popular Dog Breeds in the World—Mapped

When I travel with my friend Rachel, which I do every other year or so, we come back with as many photos of dogs as we do pictures of monuments. Rachel, you see, is canine crazy, and very outgoing, so she tends to engage with dog owners everywhere—and we end up learning about how the dog lifestyle differs around the world.

I don't mind at all. It's a marvelous way to meet both pets and people, and I have photos of Rachel cuddling new furry friends in Taiwan, France, and around the United States.

I’ve never thought systematically about which type of dogs we tended to see more, and now I don’t have to, because a British website called Household Quotes (it matches homeowners with contractors) has put together a few fascinating—and adorable—maps based on research into which breeds are most sought-after, according to Google search data. (Click here to see a larger version of the map above.)

Apparently there are commonalities in many parts of the world—especially in rottweiler ownership. That intelligent breed, thought to have been bred in Ancient Roman times to herd sheep, is the top dog in 34 countries, the most of any in the survey.

However the U.S.A.’s favorite pup, the Australian shepherd, is the most-searched hound by total worldwide. 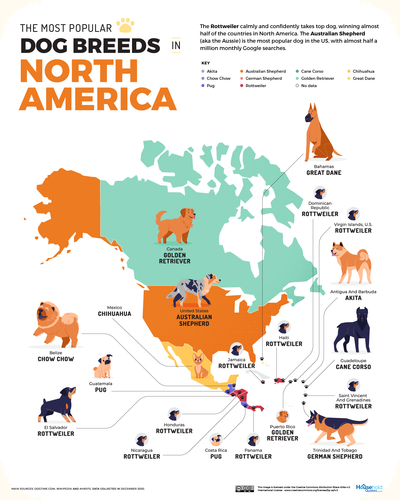 (For a larger version of this image that you can magnify, click here.)

Some other picks are just what you might guess. (Yes, the Chihuahua does dominate Mexico.)

But some are quite surprising, like the decline of the poodle in France. Nowadays, the French seem to like their Australian shepherds as much as the Americans do—though, unexpectedly, those pooches aren't top dog in Australia. That would be the border collie.

Where is the poodle popular? In the former French colony that is Vietnam.

There are also some breeds that only top the list in the regions they originated, like South Africa’s Boerboel (a muscular, mastiff type that often acts as a guard dog), which is also the most popular breed in neighboring Namibia.

In Europe, the cane corso, another breed that can be traced to the Romans (the American Kennel Club says this variety has a "noble bearing"), is beloved in the Balkans and Eastern Europe—although modern Italians prefer golden retrievers.