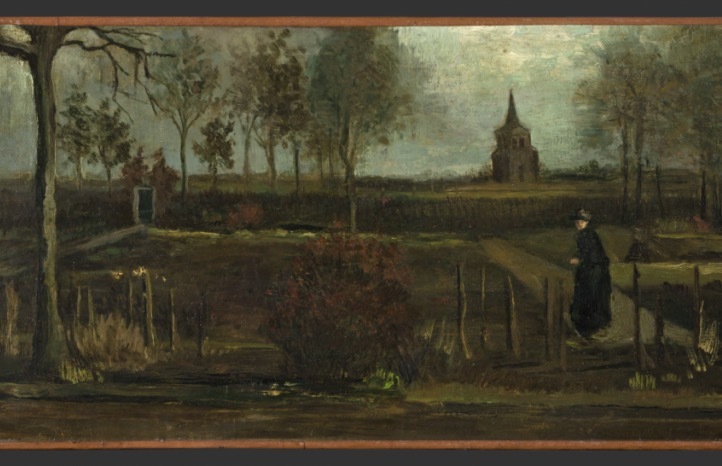 March 30, 2020, marks Vincent van Gogh's 167th birthday. Coincidentally, in the early hours of March 30, thieves broke into the Singer Laren Museum in the Amsterdam suburbs to steal one of the Dutch painter's works.

The Parsonage Garden at Nuenen in Spring (1884; detail pictured above) was on loan from the Groninger Museum in the northern Netherlands. The painting was that museum's only piece by van Gogh.

Jan Rudolph de Lorm, the Singer Laren's director, has stated that the theft was not due to lax security in this time of the coronavirus pandemic. According to him, all of the usual security procedures were in place. But the thieves were quick and skillful and managed to break in, go directly to the painting, remove it, and leave the premises in just five minutes.

This is not the first van Gogh theft in the Netherlands. In recent years, two underworld figures have offered stolen works by the painter in exchange for shorter prison sentences. Dutch drug lord Kees Houtman tried it in 2002, and Italian mob boss Raffaele Imperiale followed suit in 2016. Neither succeeded.

In 1991, the country's biggest heist of van Gogh paintings occurred at another institution, the Van Gogh Museum. Armed robbers spirited 20 works out but, thankfully, abandoned the canvasses at a nearby railway station 20 minutes later. Today, the museum is the most popular tourist attraction in the country, bringing in 2.2 million visits a year.

These thefts speak not only to the incredible monetary value of the art, but also to how important the artist is to tourism in the Netherlands.

I bring this up because I think the museum director is being shortsighted in insisting that the theft had nothing to do with COVID-19. The museum may not have changed its security patterns, but the municipality likely has.

This theft should put museums around the world on notice: It's important to take extra precautions during this fraught period while staff might be reduced and city police forces might be distracted. We need to guard our treasures so that the next generation will be able to enjoy them. The tourism they attract is crucial to many national economies.