This Hotel is in Two Countries at Once

The Hotel Arbez in the European village of La Cure is, bizarrely, located in two countries at once. Originally a grocery/pub, the building was bureaucratically cleaved in two when an 1862 border revision—everyone wanted the land because of the strategic importance of the nearby Vallee des Dappes—drew the line between France and Switzerland right through it. In 1921, it became a hotel.

Now the restaurant is technically in two places: One side serves French food and the other side serves Swiss cuisine. The division came in handy during World War II, when the upstairs of the hotel was considered Swiss—the stairway to the upper floor began in Switzerland and not in France—which made it a neutral safe haven for the French Resistance movement. Anti-Nazi activists literally plotted above the heads of Nazi occupiers, who couldn't do anything about it.

Even the bed in the honeymoon suite is bisected by an international border, making it that much easier to cross the line with your loved one. In another room, you sleep in Switzerland but have to go to France to use the bathroom.

There's a restaurant straddling the border of Croatia and Slovenia, but the Arbez is the only known hotel to be split between countries. 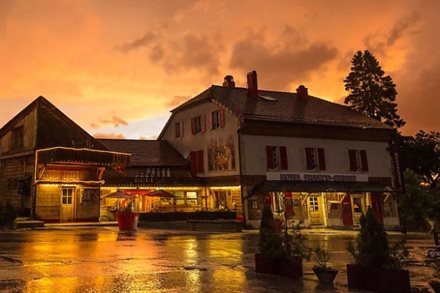