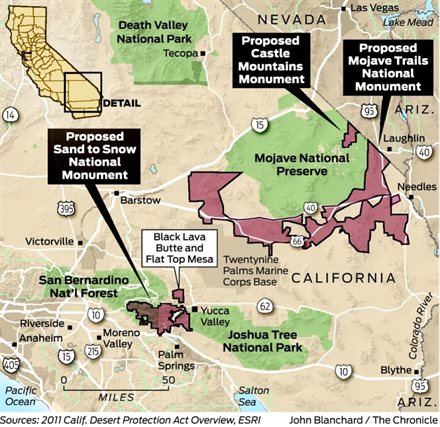 President Obama has set aside some 1.8 million acres of delicate Southern California desertland as three of the United States' newest National Monuments. They're no longer "proposed"—as of today, they're confirmed.

The new areas are called Mojave Trails, Castle Mountains (both are in the Mojave Desert), and Sand to Snow (in the Sonoran Desert). All of them are between Los Angeles and Las Vegas, Nevada, in the land near Palm Springs and Joshua Tree National Park, linking some 15 preserves together in a broad conservation region.

Sand to Snow sweeps from the floor of the Sonoran desert to California's highest peak, a diverse ecosystem that hosts some 240 species of birds plus a dozen endangered or threatened species of animal. It also sanctifies an estimated 1,700 Native American petroglyphs plus 30 miles of the popular Pacific Crest National Scenic Trail for hikers.

Most of the land was purchased by private citizens along with the Wildlands Conservancy, and together they donated it to the U.S. Bureau of Land Management with the goal of ceding it to the National Park system. The process took 15 years. By helping them achieve their goal, President Obama has now protected in excess of 265 million acres—that's more than any other administration before him.