A few months, ago, a small fishing town on the extremely isolated Atlantic coast in southern Namibia spent $100,000 in local dollars to erect a huge Hollywood-style sign on the mountain above its streets. LUDERITZ, it proclaimed for tourists, many of them from Germany.

It was all for naught. The president has renamed the town to something a little less colonial.

"This will make a hell of a difference for our tourism," complained one hotel owner. "Now people will not know where this is!"

Not that many people knew where Lüderitz was to begin with. But when you live in a little-visited town in a little-visited country where fishing is dying and brutal mining companies patrol the land surrounding you, you have to do everything you can to make yourself attractive to tourists.

Then there's the puzzle of how to pronounce it, which scarcely any European will know how to do. What is the proper elocution for a 'does not equal' sign?

The renaming, which has divided residents (called buchters), is a full course reversal from the suppression of the colonialism that looted its precious minerals and oppressed its natives. According to The Namibian: "[Regional Councillor] Scholtz said !Nami?Nüs is Luderitz’ original name given by the !Aman community, a Nama sub-tribe which was the first to settle at the coastal town before the arrival of the German tobacco merchant, Adolf Luderitz."

In 1884, the place that is now called Namibia—the least densely populated nation in Africa, and one of the prettiest—became German South-West Africa. After World War One, it fell under South African administration and was subject to Apartheid. It fought a protracted war for its independence, which it only secured in 1990.

!nami?nüs is not the only place in Namibia to be stripped of its German colonialist origins. The Caprivi Strip, the embattled stretch of land connecting it to Zimbabwe in the east, was recently renamed the Zambezi Strip, eliminating the reference to a German general.

As Namibia struggles to reclaim its heritage after more than a century of outside rule, it's also struggling to find ways to honor that history in a way our global society can grasp. Is !Nami?Nüs hiding itself from the modern world by reverting to a name from centuries ago, or is has it stumbled upon an even more interesting claim to fame? 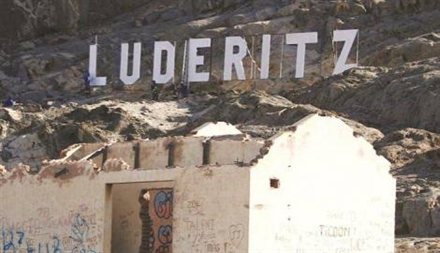