It's been a tumultuous month for American Express, and that turbulence is about to be transferred to travelers who use the credit cards. Many travelers choose the card because of its long history with overseas service and thanks to its allowances for no foreign transactions, but its benefits are about to erode.

* Most importantly, the card issuer has summarily raised rates by an average of 2.5% on more than 1 million of its customers. It doesn't matter if you pay your card on time or if you're modest with your spending habits: American Express is raising rates based on your profile, not on your behavior, and now your minimum APR will be 12.99%. If you receive a notice of the hike in the mail, consider yourself notified. And yes, it's legal to do it to you. More than ever, it's important for travelers to pay off their balance each month.

* JetBlue and American Express have broken up. If you try to apply for this partnership card, which earns True Blue frequent flier points through purchases, you will see this pop-up window telling you that, sure, you may be issued the card now, but at the end of the year, it's going to turn into something else. And they're not telling you exactly what you'll be carrying in your wallet come January 1, 2016.  (AmEx also lost its lucrative deal with Costco.) 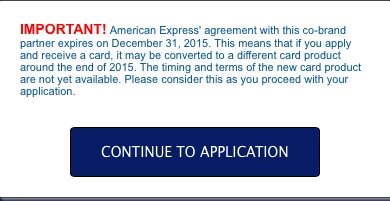 If you want a credit card that racks up JetBlue points, you'll have to switch to a Barclays MasterCard. The airline became the official card of the Barclays Center in Brooklyn a few months back, and now the marriage is official. Of course, that new JetBlue loyalty card is not available yet, so you'll have to spend the next few months in limbo before knowing which card to get, and there's no guarantee it will waive foreign transaction fees like its outgoing partner did.

It's bad enough that many vendors refuse to honor American Express because of the 2.5% it charges them to process purchases. American Express is already marginally useful in many international destinations. To combat leaking profits, the company has also been steering its products toward business travel services and premium products, upping its annual fees on many cards.

Have these changes pushed American Express a few more steps toward irrelevance for the average person who wants to travel economically?