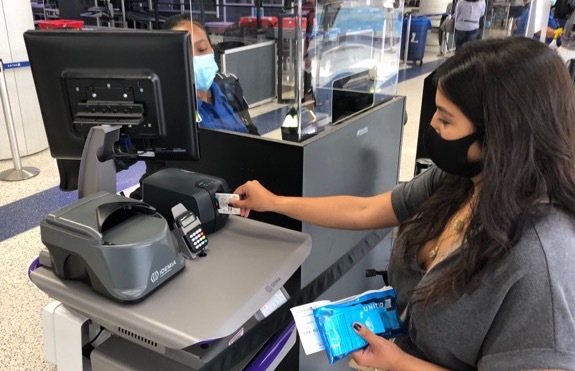 The Transportation Security Administration (TSA) has converted 100% of its security checkpoints at Los Angeles International Airport (LAX) to accept self-scanned identification verification. It's the first airport in the United States to switch fully to the new system.

No longer do passengers hand their I.D.s to human gatekeepers at LAX. Instead, flyers insert their own documentation into a Credential Authentication Technology (CAT) scanner, which converts the image into information that is instantly cross-referenced with passenger lists in the Secure Flight database to ensure the traveler is indeed booked to fly.

Because identity is used to verify ticketing, boarding passes are no longer required at L.A.'s TSA checkpoints.

The CAT devices can recognize more than 2,500 types of I.D. and can even detect when a document has expired.

The TSA is publicizing the upgrade as "touchless credential checks," but travelers will still likely need to touch the CAT equipment as they scan driver's licenses, passports, or other documents.

The new system does, however, remove the need to hand identification to a TSA agent. So from the TSA's standpoint, the process is certainly "touchless" because they no longer have to touch you.

Which is good news for protecting officers as well as flyers from potential contamination.

The new scanners, which reportedly cost about $27,000 each, are being increasingly installed at America's airports. The machines have been on the TSA's security wish list for a while. The agency began using them before the pandemic kicked in and now operate some 1,500 CAT units at 125 airports nationwide.

The rollout's future schedule has not been announced but is expected to increase in pace as long as Covid-19 is a consideration.

Kids under 18 still have to show TSA agents their documentation the old-fashioned way, and the new system doesn't change how customers check in to board flights at the gate.