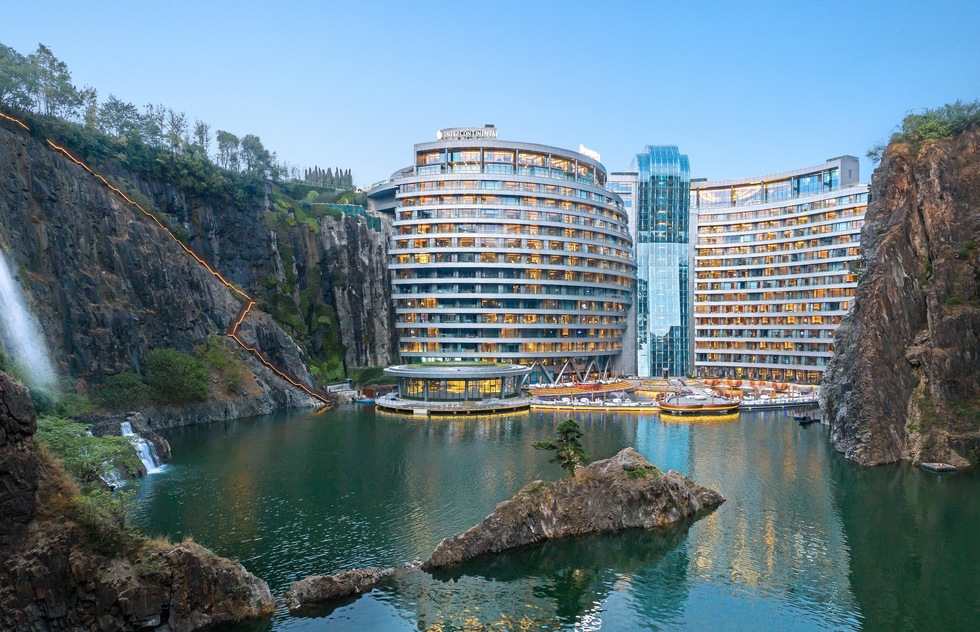 Bringing new meaning to the term "money pit," the recently opened, mostly subterranean InterContinental Shanghai Wonderland is a ritzy, multimillion-dollar resort with 16 of its 18 floors built into the side of a quarry southwest of Shanghai.

The hotel has 336 rooms, the majority of which are located below ground level, stretching to a depth of 88 meters (289 ft.) in China's Sheshan Mountain Range.

Like an upside-down high-rise, the swankiest suites in this "earthscraper"—as it's being called, according to CNN—are the lowest two. They're housed inside an aquarium and come with around-the-clock butler service.

But those staying on higher floors aren't forced to live like mole people. Views of waterfalls and the surrounding cliffs come with most rooms, and there are opportunities for rock climbing and strolls along a glass-bottomed skywalk. Sheshan National Forest Park and Chenshan Botanical Garden are both nearby.

The hotel's indoor amenities include a swimming pool, three restaurants, and the Quarry Bar.

Room rates to stay overnight at this quirk of engineering start at 3,394 yuan (US$490), reports Agence France-Presse.

Hotel guests who, for whatever reason, start to miss their own beds can at least say that they finally understand the meaning of Bob Dylan's "Subterranean Homesick Blues."
Hotels
News
Videos