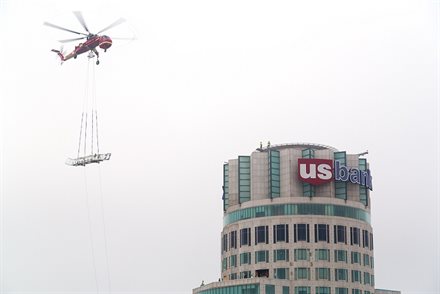 We're amidst heady days for Los Angeles tourism. Last week, the city's Metro system scored a major advance for visitors intent on avoiding traffic. It opened an extension of its Expo Line that can now take you all the way to Santa Monica's world-famous beach to Hollywood to Universal Studios—all without a car.

But a second major new addition is on the horizon. Or, more accurately, above it. Downtown's signature skyscraper, the U.S. Bank building, may have been built in the late 1980s but it's finally getting an observation deck, something this beautifully mountainous city has been glaringly missing as a major attraction. (Yes, visitors can technically go up the shorter City Hall, but it's not easy to figure out how.)

As of June 25 (reservations are being accepted now), that changes. In 2013, the U.S. Bank tower (also called the Library Tower) was purchased by a Singapore concern, and it immediately went to work converting 69th floor, 70th floor, and roof of the tallest building on America's West Coast into OUE Skyspace with an open-air observation deck, which opens on that day. (Car-free visitors can take the Metro to it.)

It's also installing a short transparent slide for daredevils. Although not nearly as elaborate as the one that opens in London the day before, Skyslide is still a slippery gimmick. Per the builders, it will be "positioned nearly 1,000 feet above downtown Los Angeles. The Skyslide is forty-five feet long, approximately 4 feet wide and made entirely with 1-1/4 inches [sic] thick glass. Visitors will experience Skyslide’s unparalleled views in a whole new way as they glide from the 70th to the 69th floor of the U.S. Bank Tower." The entrance to the slide is just four feet wide.

Something tells us that most guests aren't going to be sighing over the view while they're hurtling down that thing.