Where in the World is Godzilla? Hint: It's Not Tokyo 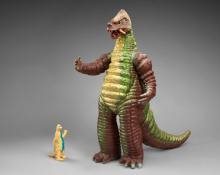 The web is abuzz with talk of the remake of the Toho classic film, Godzilla, premiering around the country in May.  Advance word is the remix (this time with Bryan Cranston) is as awesome as the big guy himself.

Web searches on travel sites will also call up eager travelers who want to know if they can find a Godzilla museum in Japan.  The short answer is no.  Unfortunately, there is no Godzilla Museum in Japan. It seems a marketing opportunity missed,  but there you are.

You can find Godzilla at—of all places—San Francisco International Airport.  A toy version of the monster lizard can be found at Terminal 3, Departures, Level 2, Post-Security.  Godzilla is part of SFO’s free exhibit, Japanese Toys! From Kokeshi to Kaiju

Kaiju means “Japanese monster” and you can see a variety of them in this temporary exhibit which is on view for a short time until its closing in May.  The exhibit may travel on to a more permanent location so check the Internet after May.

Another great way to see giant lizards, albeit not Godzilla himself, is at Dinosaur Valley State Park. The Park is the home of a 70-foot Apatosaurus and a 45-foot Tyrannosaurus Rex which were originally built for the 1964 World’s Fair in Queens, New York.  For a $7.00 adult entrance fee (kids are free) you can see the giant lizards and track original dinosaurs in the tracks they left in the Park’s active river bed.

And if you have a hankering to see the original “Gojira” (Godzilla's real, Japanese name) in all his glory, watch for the newly restored 1954 Japanese Toho film (the one without Raymond Burr).  It’s having its premiere at New York’s Film Forum but then rolling out nationwide soon after.

If the reboot of the film is a hit, rumors are also swirling that a new Godzilla ride may be considered next year at the Universal Orlando Resort theme park.