Where was ABC's series 'The Quest' filmed? 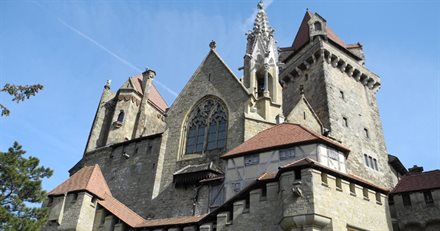 ABC's groundbreaking reality competition series The Quest has not been a summer ratings bonanza. In fact, for its final few weeks, the network plans to air episodes back-to-back as to burn off its inventory so it can broadcast more lucrative programs. Nevertheless, its fans are passionate, and one of its central actors, Peter Windhofer, is achieving cult matinee idol status, as this fan shrine on Tumblr attests. The Quest's novel idea of blending a medieval fantasy plot with a likable cast and inventive challenges may not be appreciated today, but like ABC's beloved-but-bygone series The Mole, The Quest may be more appreciated in retrospect.

For its fansThe Quest piqued interest in its setting, which appears so perfect and so unspoiled that it's a wonder it exists somewhere. It's largely set inside a gorgeous turreted castle on a hill, surrounded by forest. It could almost make you want to take a vacation there. Where is that?

It wasn't shot in America. The castle is Kreuzenstein Castle (Burg Kreuzenstein) northwest of Vienna in Austria. Although there were medieval castles on the same plot, what's there today was constructed in the 1800s using chunks of medieval castles from around Europe—like a Frankenstein's Monster of castles.

The castle is often used for filming, although most of the productions have been European. The Quest's producers shot the series there last summer using their own generators—there is no electricity inside the fortress or even running water. There is, however, one of the largest collections of historic weapons in Austria.

Should you want to visit it yourself or troop through its 70 acres of forest, day tours are available from April to early November.