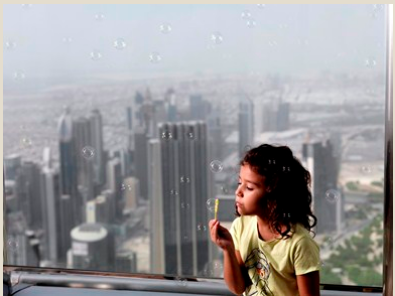 By comparison, the Empire State Building's observation deck on its 86th floor is a measly 1,050 feet up.

And lo, wouldn't you know it: The admission price sets a new high, too.

Previously, tourists were only able to get as high as an interim deck on the 124th floor—and nearly 2 million tourists did that last year. The London Daily Telegraph reports the fee is equivalent to US $109 if purchased in advance and $136 if bought on the spot.

That exceeds the price of Disneyland. All to stand by a window and blow bubbles, apparently, if the cheesy staged media photos are meant to be representative.

Watch this video look inside the building that was made when the "lower" (124th-floor) deck was the main observation option. When you're that high up, it scarcely matters to the view that you're another 24 floors higher. Except to your wallet, of course: