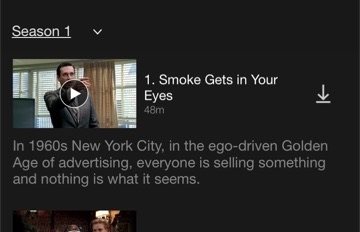 Netflix is finally—finally!—rolling out the ability to download shows to your device to watch later, which means that soon, you will not require a high-speed internet connection if you want to be entertained. For many people, this could spell doom for the lousy or overpriced entertainment options on flights, and for many other people, it means they no longer have to shell out for terrible in-flight Wi-Fi in a futile effort to amuse themselves.

Bus trips, rainy days stuck in the hotel—all of travel's more desultory moments can now be enlivened with a binge if Netflix members are smart enough to download shows to their phones or tablets ahead of time. (Amazon Prime has allowed downloading since 2015.)

Not everything on Neflix's roster is available to download yet, but the company is working on expanding its offline library. As long as you have the latest version of its app, if a show is available for download, an icon will appear on its details page—look for an arrow pointing downward toward a short line. When you're finished watching the show, you just delete it.

What's already available? So far, original series including Orange Is the New Black, House of Cards, Stranger Things, Unbreakable Kimmy Schmidt, Master of None, and The Crown are available now. Other titles available for offline viewing include TV shows Supernatural, The Office, The Flash, The 100, and some animated movies. The list will only grow.

Now, if you only had enough space on your phone.