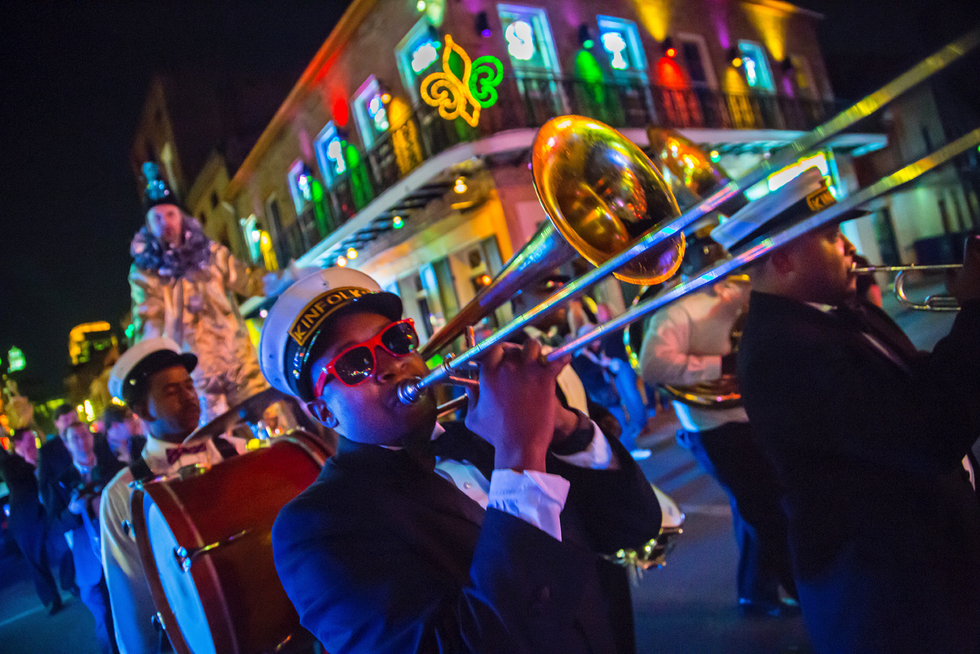 You Can Throw Your Own Parade in New Orleans! Here's How

You don’t have to be the king of a Mardi Gras club to throw your own parade and march through the streets of New Orleans. But if you do, you’ll certainly feel like one.

While it's a little-known fact, it’s actually quite simple to throw your very own second line parade in New Orleans, legally and complete with police escort and marching band. All you need to do is follow a few simple steps ahead of your visit.
First, you’ll need to secure the necessary permits from the City of New Orleans’ paperwork clearinghouse, One Stop Shop. An event permit and police escort (which includes two uniformed officers on motorcycles tailed by a police cruiser in back) are required, and cost around $600. You will be told to fill out a Master Special Event Permit Application and a Parade Permit Application (additional forms may be required.)
You’ll also be asked to note your parade date, time, and route. The city can help you choose a route, but most parades march through the French Quarter and start or end outside of popular bars in the area.

After that, you’ll want to hire a band to lead your parade. Many can be hired from a site like Gigsalad for an additional fee ranging from a few hundred to a few thousand dollars, depending on the size of the band, the date, and your parade length (most parades last 30–60 minutes).


Once your permit is approved and your band is hired, the fun part begins. Just show up with your friends and family for your parade and get ready for a day you will never forget as you strut through the streets of New Orleans, drinking and dancing while, as per tradition, random onlookers join your parade to party alongside you, with plenty of beaming smiles and playful high-fives all around.
If you prefer to have someone organize your parade for you, you may also hire one of several local companies like Jazzman Entertainment or Frenchman Street Productions. They'll do all the work for you for an additional fee.