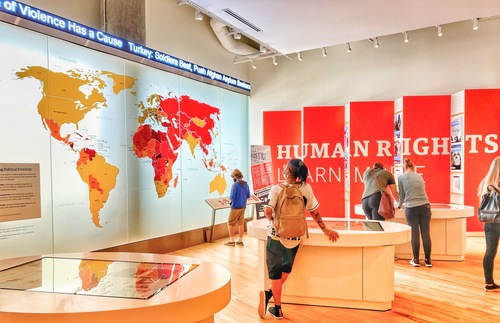 Do you have the courage to make a real difference in the world?

That's the central question asked of visitors at this important and moving museum. Opened in 2014, the 42,000-square-foot facility is an unusually successful polemic that uses every contemporary method of grabbing attention to provide sobering information and make compelling arguments. Those tools include top-notch videos, interactive digital displays, beautifully written wall text, handsome photographs, and full-sensory attractions (more on those below). Walking through the museum is an emotionally intense experience but a worthwhile one.

The museum is divided into three main areas—one for each floor. Smaller temporary exhibits supplement the permanent exhibits.

Put aside at least two hours to experience all three of the main attractions. If you run short on time, you could skip the basement archives, which display changing artifacts from the life of Martin Luther King, Jr., provided by Morehouse College. Because what's shown changes every few months, this area is a bit more hit-or-miss than the rest of the museum.

Start with the ground floor exhibit, a visceral history lesson about the U.S. civil rights movement of the 1950s and '60s. Among the highlights are a short film about the incredible violence that was unleashed upon the Freedom Riders; archival TV clips exposing villains of the era such as politicians Strom Thurmond and George Wallace defending segregation; and a majestic, airy room devoted to the 1963 March on Washington, with clips from that day playing on one massive wall and exhibits on the elaborate planning that went into the event on the other.

The most intense exhibit: a re-creation of a segregated lunch counter, where museum-goers sit on stools and listen through earbuds to taunts as the stool shakes as if it were being kicked from behind. It may sound hokey, but it's very affecting. 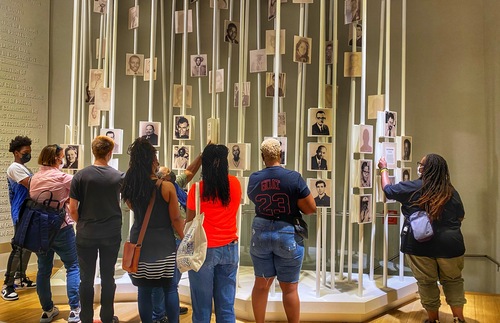 The top floor of the museum is devoted to the array of human rights abuses that bedevil society today, from human trafficking to internet censorship under authoritarian regimes (see the "Great Firewall" of China) to the mistreatment of women and girls, people with disabilities, LGBTQ folks, and more.

Displays are updated with ripped-from-the-headlines frequency. In one exhibit about which dictators are currently on trial or serving sentences for crimes against humanity, it looked like the glue on the wall text hadn't had time to set yet.

It's on the top floor that the call to action is most direct. One display breaks down all of society into four groups: abusers, victims, upstanders (those who try to help the victims), and bystanders. Which group do you fall into?

View our full list of Attractions in Atlanta
advertisement