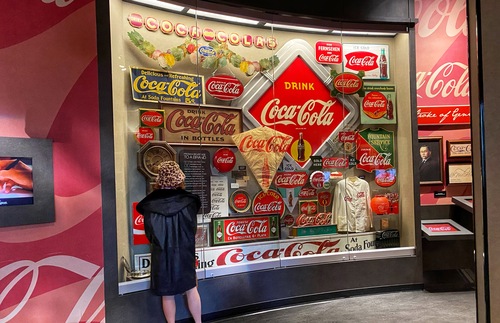 An exposition showcasing the world's most popular soft drink, World of Coca-Cola sounds like a huge Coke commercial—and it is. But it's also one of the biggest attractions in the city. Should it be? That all depends on how strong a stomach you have for baldly corporate marketing. The museum, in a 75,000-square-foot facility downtown near Centennial Park, the CNN Center, and the Georgia Aquarium, houses a massive collection of Coca-Cola memorabilia, along with numerous and often silly interactive displays, an art gallery, and video presentations.

The self-guided tour begins with a preshow in the memorabilia-laden Coca-Cola Loft, which includes the oldest artifact, a 1905 "Drink Coca-Cola" Christmas bell decoration, advertising the fizzy beverage for 5¢. From here, visitors gain entrance to the Happiness Factory Theater, where a short film shows people from around the world celebrating major life events—engagements, milestone birthdays, football wins—by slurping down Coke. Milestones of Refreshment, a series of 10 galleries, traces the history of Coca-Cola from its 1886 debut at Jacob's Pharmacy in downtown Atlanta to its current worldwide fame. Gathering in the Hub, visitors have an opportunity to meet the Coca-Cola polar bear and have their photo taken with him. Alas, the Bottle Works exhibit, a simalcrum bottling line no longer shows the process (the machines are there, but they no longer seem to be turned on). 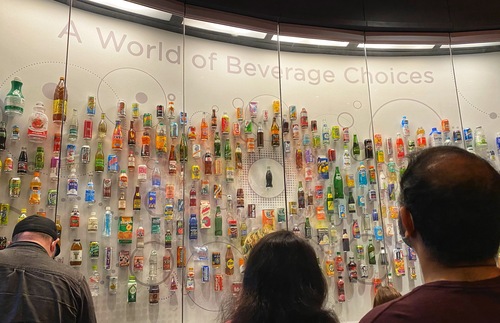 The second level is the highlight of the tour, with its Taste It! exhibit, where visitors can have free samples of more than 60 soft drink products from around the world. (Warning: You'll soon figure out that America's idea of refreshing isn't the same as that of other countries.)  The Pop Culture Gallery showcases Coca-Cola as an icon of popular culture and includes artistic expressions of those inspired by the soft drink, including paintings, furniture, home decor, and advertisements. The tour ends in the massive gift shop, which sells a mind-boggling array of Coca-Cola logo items, everything from T-shirts to Coke polar bears.

If you plan to pair the Georgia Aquarium with another sight, we'd recommend the National Center for Civil and Human Rights over the World of Coca Cola, unless you have small children in tow. It's in the same park but is far more thoughtprovoking and frankly, entertaining (Coca Cola's sugar buzz wears off fast). All three institutions share a huge covered parking garage with a $12 fee. Pemberton Place includes an expansive lawn, perfect for a picnic, as well as a cafe and public restrooms.

View our full list of Attractions in Atlanta
advertisement