Things to Do in Maine's Mid- Coast 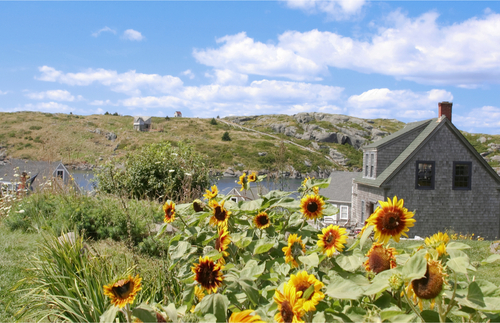 Veteran Maine travelers contend that this part of the coast, long known as the "Midcoast," is fast losing its native charm -- it's too commercial, they say, too developed, too highfalutin' . . . in short, too much like the rest of the United States. These grousers have a point, especially along U.S. Route 1. But get off the main roads and you'll swiftly find pockets of another Maine, some of the most pastoral and picturesque meadows, mountains, peninsulas, and harbors in the entire state.

The coast is best reached via U.S. Route 1, which you catch in Brunswick by taking exit 28 from I-295. Going north, some highlights of the coastal route include the shipbuilding town of Bath, pretty little Wiscasset, and the Boothbay region on the southern end of the Midcoast; the lovely Pemaquid peninsula; lost-in-time Monhegan Island (pictured above); and finally the power trio of Camden, Rockland, and Rockport at the northern end of the Midcoast (which are covered in the next section, "Penobscot Bay").

Beyond local tourist huts and chambers of commerce, the best source of information for the Midcoast region in general is found at the Maine State Information Center (tel. 207/846-0833) just off exit 17 of I-295 in Yarmouth, which isn't really in the Midcoast -- but you'll almost certainly pass through to get there. This state-run center is stocked with hundreds of brochures, and is staffed with a helpful crew that can provide information about the entire state but that is particularly well informed about the middle reaches of coast. It's open daily from 8am to 6pm (8:30am-5pm in winter), and the attached restroom facilities are always open.

One "Must See" If You're Driving Into the Area -- Right across the road from the state information center in Yarmouth is the former DeLorme Map Store, open Monday to Friday from 8am to 5pm. The mapping company DeLorme was purchased by GPS giant Garmin some years back, and the new owners shut down what had been a store full of map and atlases. They’ve kept the lobby open, though, so that visitors can drop in to get a look at Eartha, “the world’s largest rotating and revolving globe.” The 42-foot-diameter globe occupies the entire atrium and is constructed on a scale of 1:1,000,000, the largest satellite image of the earth ever produced. Far out.