Things to Do in Mount Desert Island and Acadia National Park 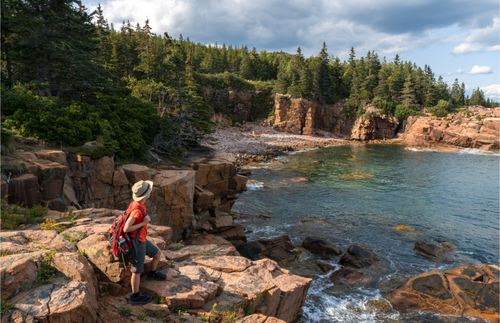 Mount Desert Island is home to spectacular Acadia National Park, and for many visitors, the two places are one and the same. Yet the park’s holdings are only part of the appeal of this popular island, which is connected to the mainland by a short causeway. Besides the parklands, there are scenic harborside villages and remote backcountry roads aplenty, lovely B&Bs and fine restaurants, oversize 19th-century summer “cottages,” and the historic tourist town of Bar Harbor.

It’s not hard to understand why Acadia is one of the crown jewels of the U.S. national park system. (It draws the second-most visitors annually of any national park.)

The landscape here is a rich tapestry of rugged cliffs, pounding ocean surf, fishing and leisure boats lolling in harbors, and quiet forest paths. If you look at a map, you’ll see that the island is nearly split in two by a great tidal inlet, Somes Sound; most of the park’s land is on the eastern side of the island, though there are some vast holdings in the west, too. To help orient you, I’ve placed a color map of Mount Desert Island inside the front cover of this guidebook.

On the much-more-developed eastern side of the island, Bar Harbor is Mount Desert Island’s center of commerce and entertainment, a once-charming resort now in danger of being swallowed up by T-shirt and trinket shops. It has by far the best selection of lodging, meals, supplies, and services on the isle. (If you want to shop, fine-dine, or go out at night, you pretty much have to stay here.)

Otherwise, if quiet is what you’re seeking, consider bunking elsewhere on the island. The western side has a quieter, more settled air and teems with more wildlife than tourists; here, the villages are mostly filled with fishermen and second-homers rather than actual commerce.

The island isn’t huge—it’s only about 15 miles from the causeway to the southernmost tip at Bass Harbor Head—yet you can do an awful lot of adventuring in such a compact space and see many different kinds of towns and landscapes. The best plan is to take it slowly, exploring if possible by foot, bicycle, canoe, and/or kayak, giving yourself a week to do it. You’ll be glad you did.

A word on pronunciation: There is some debate about how to correctly pronounce the island to which we're referring. The name is of French origin; technically, it should be Mount days-airt, but nobody says it that way anymore. Most locals say “Mount Des-sert,” like what you have after dinner, which is pretty close to the French way of saying things. (Notice the accent on the last syllable.) However, plenty of tourists, transplants, and locals also say Dez-ert (like the Sahara), and that’s not wrong. After all, that’s how it’s spelled.


Acadia’s terrain, like so much of the rest of northern New England, was shaped by the cutting action of the last great glaciers moving into and then out of the region about 18,000 years ago. A mile-high ice sheet rumbled slowly over the land, scouring valleys into deep U shapes, rounding many once-jagged peaks, and depositing boulders at odd places in the landscape—including the famous 10-foot-tall Bubble Rock, which appears perched precariously on the side of South Bubble Mountain. 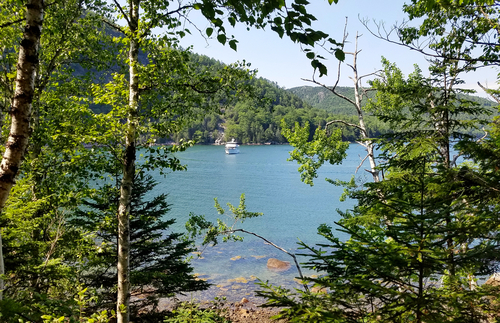 A look at the geography of the island: Mount Desert Island is divided deeply right down the middle into two lobes (almost like a brain) by Somes Sound (pictured above), a tidal inlet that’s often called the Lower 48’s only true fjord—that is, a valley carved out by a glacier and then subsequently filled in with rising ocean water. As many a Mainer will tell you, however, the feature is more properly classified as a fjard, a close hydrogeological cousin, which is less steep and shallower, the result of a flooded glacial lowland but not a truly scoured glacial trough.
advertisement


You’ll find that many around MDI leave the finer distinctions to the geologists (and the Scandinavians, who take this stuff quite seriously) and simply refer to Somes Sound as a fjord. Whatever vowel you prefer, it’s no less dramatic to gaze upon.


In the 1840s, Hudson River School painter Thomas Cole brought his sketchbooks and easels to remote Mount Desert Island, which was then home to a small number of fishermen and boat builders. His stunning renditions of the coast were displayed in New York City, triggering a tourism boom as urbanites flocked to the island to “rusticate.”
advertisement


By 1872, national magazines were touting Eden (Bar Harbor’s name until 1919) as a desirable summer getaway. It attracted the attention of wealthy industrialists, and soon became the de rigueur summer home of Carnegies, Rockefellers, Astors, and Vanderbilts, who built massive “cottages” with dozens of rooms.


By the early 1900s, the island’s popularity and growing development began to concern its most ardent supporters. Boston textile heir George Dorr and Harvard president Charles Eliot, aided by the largesse of John D. Rockefeller, Jr., began acquiring and protecting large tracts of the island for the public to enjoy.
advertisement


These parcels were eventually donated to the U.S. government, and in 1919, the land was originally designated as Lafayette National Park—the first national park east of the Mississippi—named after the French general who assisted colonists in the American Revolution.


Renamed “Acadia National Park” in 1929, the park has now grown to encompass nearly half the island, its holdings scattered piecemeal. It is a fine, even world-class, destination for those who like coastal vacations salted with adventure. Try to allow 3 or 4 days, at a minimum, for visiting the park. If you’re passing through just briefly, try to work in at least two of the big three activities—hiking, biking, and driving.
advertisement

And when you set out to explore the park, bring a picnic, for there are just about no food services whatsoever within the park.