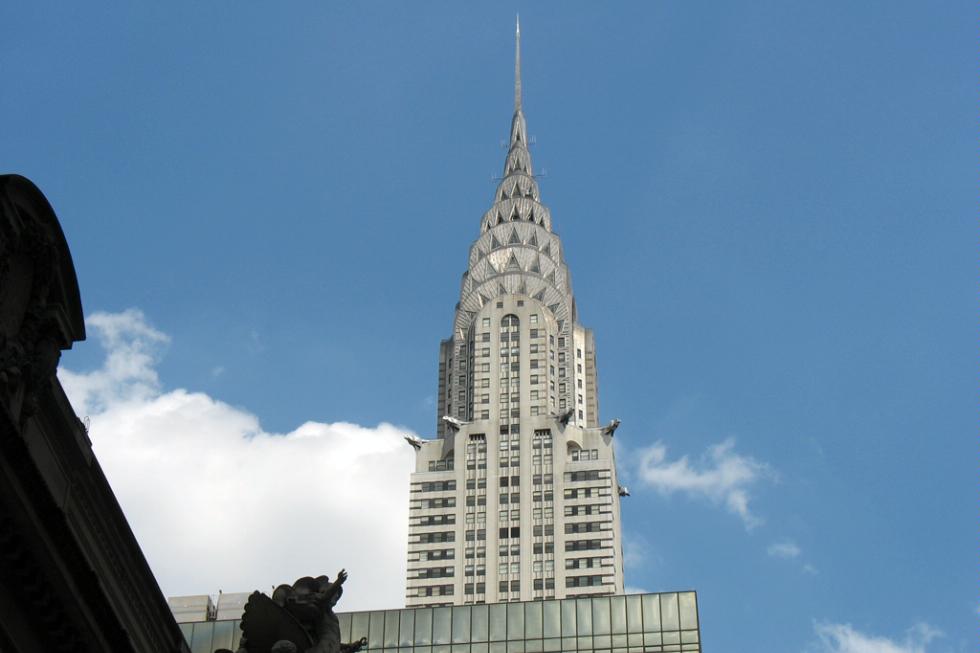 In the Chrysler Building we see the roaring-twenties version of what Alan Greenspan called “irrational exuberance”—a last burst of corporate headquarter building before stocks succumbed to the thudding crash of 1929. Throughout the previous decade, real estate speculators had been throwing up building after building, adding almost 100 skyscrapers of 20 stories or more, and utterly transforming the skyline of the city. Automaker Walter P. Chrysler commissioned architect William Van Alen to top them all, instructing him that he wanted a building “higher than the Eiffel Tower,” the tallest in the world at that time. What Chrysler would soon learn was that the gentlemen behind the Bank of America had the same ambition, and they had hired Van Alen’s former partner (and sworn enemy) H. Craig Severance to build them the tallest building on the planet down on Wall Street. Soon the race was on as each architect returned continually to the drafting board, adding 10 more stories of penthouses here, a lantern or a 50-foot flagpole there. In the fall of 1929, Severance was sure he had won, so he completed the Bank of America building at 927 feet. Van Alen then unveiled the coup de grâce that he had been hiding in an elevator shaft—a silver spike to crown his building, making it, at 1,046 feet, an unbeatable 117 feet higher than his rival’s.

Not only taller, the Chrysler was the more striking of the two buildings, its scalloped spire set like a jaunty jester’s cap atop a sleek tower. Take a look at the sharp stainless-steel eagles that jut out just below the roof; the “gargoyles” below those on the 61st floor are actually modeled after the hood ornament of the 1929 Chrysler Plymouth.

The Chrysler remains one of the most impressive Art Deco buildings ever constructed, but it wasn’t the tallest for long. Less than a year after it was completed, the Empire State Building assumed that mantle and held it until the World Trade Center came along.