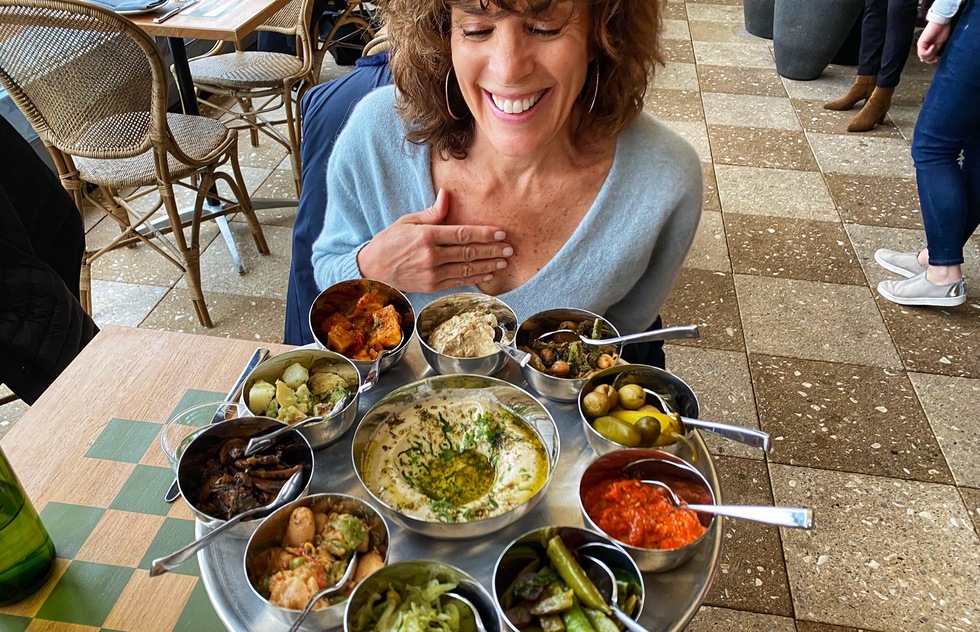 If we’re lucky, sometime in the near future people across the USA will exclaim, when it’s time for dinner, “Hey, let’s go to a shipudiya tonight!” That’s what folks in Israel do, because this type of eatery is as ubiquitous there as American diners are here. But more than that, feasting at one is just so darn fun. The meal starts with a generous included array of salads and spreads; at Laser Wolf, it’s a large platter topped with 11 metal cups of different sorts of veggie treats, from mushroom salad with sour cherries and chard, to a comforting Yemenite potato salad, to babaganoush, pickles, and more. That is followed by meats, seafood, or vegetables seared over very hot charcoal (in this category, Laser Wolf’s BBQ short rib is such a knockout it often runs out early in the evening). Drinks are de rigueur, as is fun music. And at Laser Wolf, which was created by Philadelphia celeb chef Michael Solomonov, the culinary pleasure is heightened by the fact that you’re dining on a rooftop with awe-inspiring views of the Hudson River and Manhattan skyline. Two notes: don’t be shy about sharing one entrée between two people. I didn’t and ended up bringing home enough leftovers for two full meals, thanks to the many included salads.  And for the musical theater geeks: yes, the restaurant was named after the butcher in Fiddler on the Roof!