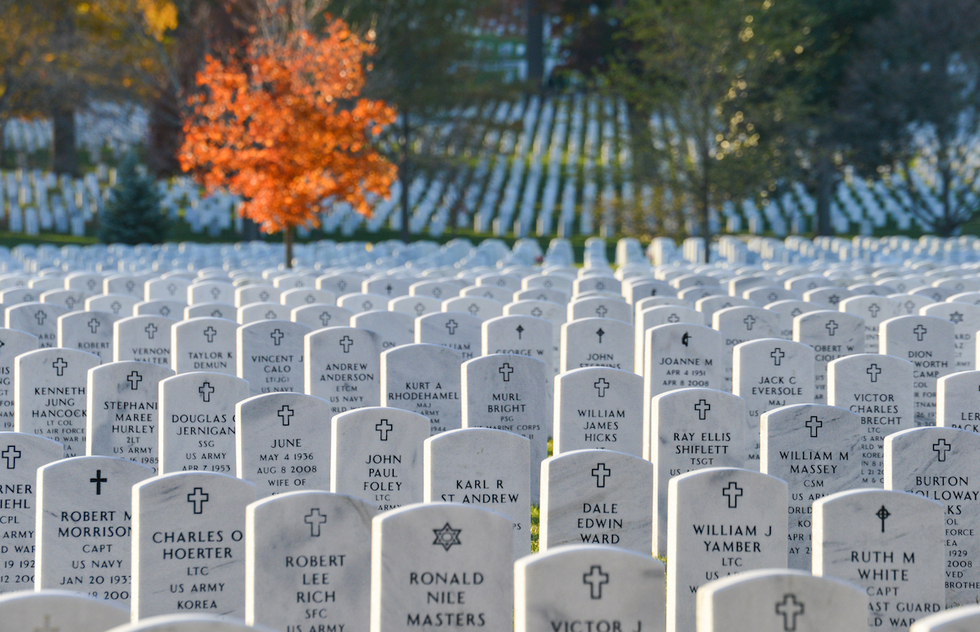 Arlington National Cemetery is, without hyperbole, the United States’ most important burial ground. This shrine occupies approximately 639 acres on the high hills overlooking the capital from the west side of Memorial Bridge. More than 400,000 people are buried here, including veterans of all national wars, from the American Revolution to the Iraq and Afghanistan conflicts; Supreme Court justices; literary figures; slaves; presidents; astronauts; and assorted other national heroes. Many graves of the famous at Arlington bear nothing more than simple markers.

Upon arrival, head to the Welcome Center, where you can view exhibits, pick up a detailed map, and use the restrooms (there are no others until you get to Arlington House). The Welcome Center also offers kiosks where you can access the cemetery’s app, ANC Explorer, to find locations of and directions to individual gravesites plus self-guided tours of the cemetery. (Or download the free app ahead of time at the App Store or Google Play or from the Arlington National Cemetery website.)

If you’re here to visit a particular grave, you’ll be gratified to know that the cemetery operates a free shuttle to individual gravesites. And if you’re here as a tourist, and you’ve got plenty of stamina and it’s a nice day, consider touring all or part of the cemetery on foot. Plenty of people do. I’d say it’s worth it to spring for the narrated tour. It’s a hop-on, hop-off tour that makes four stops: at the gravesites of Pres. John F. Kennedy, Gen. John J. Pershing, the Memorial Amphitheater and Tomb of the Unknown Soldier, Arlington House. The tour lasts an hour or more, depending on how many times you hop on and off, and how long you stay at each site. Service is continuous, and the narrated commentary is lively and informative. You can buy tickets online in advance (www.arlingtontours.com) or at the ticket counter in the Welcome Center. Tickets are $15 adults, $11 seniors, $7.25 children 4 to 12; military and active-duty personnel receive discounted prices, and disabled and active-duty military in uniform are free (with proper ID).

Remember: This is a memorial frequented not just by tourists, but also by those attending burial services or visiting the graves of beloved relatives and friends who are buried here.

Cemetery highlights include the Tomb of the Unknown Soldier, which contains the unidentified remains of a service member from World War I in a massive, white marble sarcophagus; just west of the sarcophagus are three white marble slabs flush with the plaza, marking the graves of unknown service members from World War II and the Korean War, as well as a crypt that honors all missing U.S. service members from the Vietnam War—but this crypt contains no remains. In 1998 the entombed remains of the unknown soldier from Vietnam were disinterred and identified as those of Air Force 1st Lt. Michael Blassie, whose A-37 was shot down in South Vietnam in 1972. The Blassie family buried Michael in his hometown of St. Louis. A 24-hour honor guard watches over the marble Tomb of the Unknowns and its companion gravesites with the changing of the guard taking place every half-hour April to September, every hour on the hour October to March, and every hour at night year-round.

Within a 20-minute walk, all uphill, from the Welcome Center is Arlington House, The Robert E. Lee Memorial (www.nps.gov/arho; tel. 703/235-1530), which was begun in 1802 by Martha Washington’s grandson (through her first marriage), George Washington Parke Custis, who was raised at Mount Vernon as George and Martha's adopted son. Custis’s daughter, Mary Anna Randolph, inherited the estate, and she and her husband, Robert E. Lee, lived here between 1831 and 1861. When Lee headed up Virginia’s army, Mary fled, and federal troops confiscated the property. The house is restored to its 1860 appearance, with detailed room displays and objects that belonged to George Washington and the Lee family, and a museum and bookstore.

It’s worth visiting the Arlington House estate for the spectacular view of the capital from its hilltop location. Just below the house, look for Pierre Charles L’Enfant’s grave at a spot that is believed to offer the best view of Washington, the city he designed.

Below Arlington House is the gravesite of President John Fitzgerald Kennedy, a 3-acre lawn terrace paved with irregular-sized stones of Cape Cod granite, bits of grass growing between the stones. At the head of the gravesite is a 5-foot, circular fieldstone, with the Eternal Flame burning in the center. Embracing the terrace is a low crescent wall inscribed with quotations from President Kennedy’s presidency. Slate headstones mark the actual graves for President Kennedy, Jacqueline Kennedy Onassis, and their two infant children. President Kennedy’s two brothers, Senators Robert Kennedy and Edward Kennedy, are buried close by. The Kennedy graves attract streams of visitors. Arrive close to 8am to contemplate the site quietly; otherwise, it’s often crowded.

The Women in Military Service for America Memorial (www.womensmemorial.org; tel. 800/222-2294 or 703/892-2606) is another recommended spot. It honors the more than 3 million women who have served in the armed forces from the American Revolution to the present. The impressive memorial lies just beyond the gated entrance to the cemetery, a 3-minute walk from the visitor center. As you approach, you see a large, circular reflecting pool, perfectly placed within the curve of the granite wall rising behind it. Arched passageways within the 226-foot-long wall lead to an upper terrace and dramatic views of Arlington National Cemetery and the monuments of Washington; an arc of large glass panels (which form the roof of the memorial hall) contains etched quotations from famous people about contributions made by servicewomen. Behind the wall and completely underground is the Education Center, housing a Hall of Honor, a gallery of exhibits tracing the history of women in the military; a theater; and a computer register of servicewomen, which visitors may access for the stories and information about 265,000 individual military women, past and present. Hours are 8am to 5pm. Stop at the reception desk for a brochure with a self-guided tour through the memorial. The memorial is open every day except Christmas.

Just across the Memorial Bridge from the base of the Lincoln Memorial Washington, D.C.