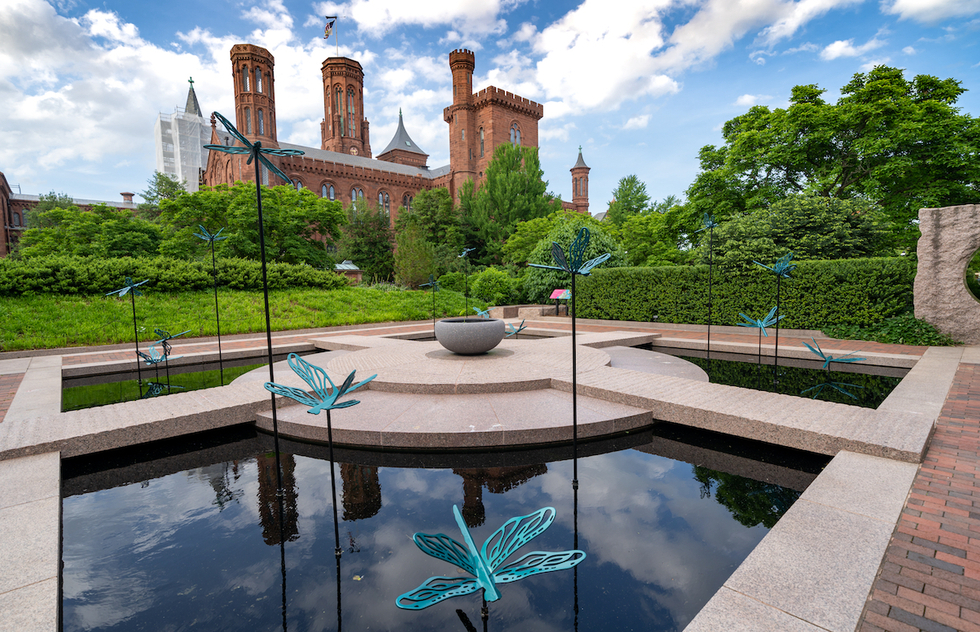 Named for its donor, a noted supporter of horticultural projects, this pretty 4 1/4-acre garden presents elaborate flower beds and borders, plant-filled turn-of-the-20th-century urns, 1870s cast-iron furnishings, and lush baskets hung from reproduction 19th-century lampposts. The garden is planted on the rooftops of the subterranean Ripley Center and Sackler and African Art museums.

Most captivating is the parterre of symmetrically arranged plots whose vividly colorful and varied plantings change season by season. The ornamental garden patterns complement the Victorian architecture of the nearby Smithsonian Castle. The tranquil Moongate Garden near the Sackler Gallery employs water and granite in a landscape design inspired by a 15th-century Chinese temple. Two 9-foot-tall pink-granite moon gates frame a pool paved with half-rounds of granite. Benches backed by English boxwoods sit under a canopy of weeping cherry trees.

The Fountain Garden outside the African Art Museum replicates an Islamic garden, complete with elements of geometrical symmetry, low walls, a central fountain, and water cascading down the face of a stone wall. Five majestic linden trees shade a seating area around the Downing Urn, a memorial to American landscapist Andrew Jackson Downing, who designed the National Mall. Elaborate cast-iron carriage gates made according to a 19th-century design by James Renwick salute the Independence Avenue entrance.