On West Basin Dr., alongside the Tidal Basin in West Potomac Park (across Independence Ave. SW from the Mall) 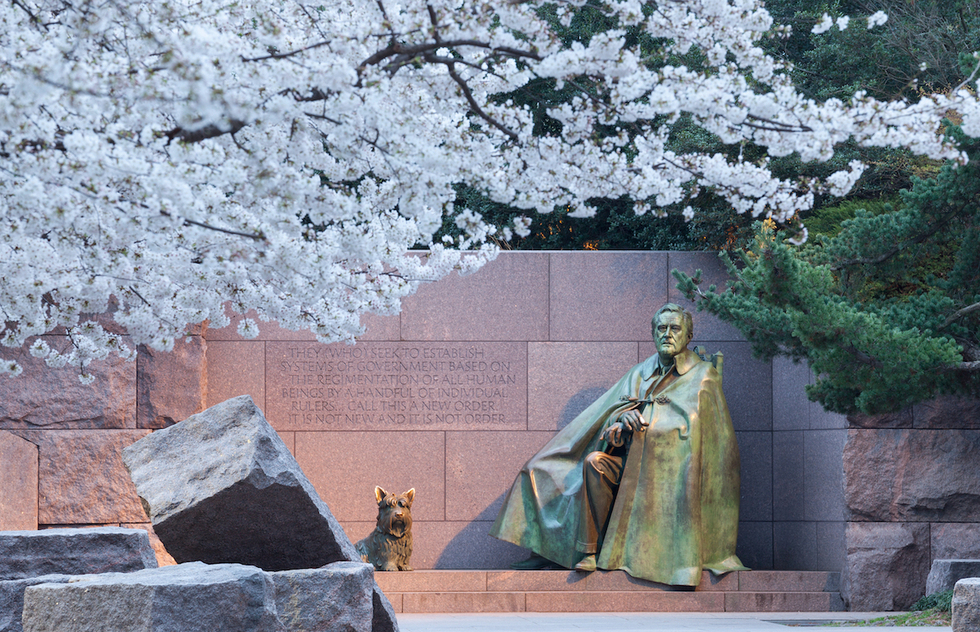 Since it opened in 1997, the FDR Memorial has proven to be one of the most popular of the presidential memorials. Its popularity has to do as much with its design as the man it honors. This 7 1/2-acre outdoor memorial stretches out, mazelike, rather than rising up, across the stone-paved floor. Granite walls define the four “galleries,” each representing a different term in FDR’s presidency, from 1933 to 1945. Architect Lawrence Halprin’s design includes waterfalls, sculptures (by Leonard Baskin, John Benson, Neil Estern, Robert Graham, Thomas Hardy, and George Segal), and Roosevelt’s own words carved into the stone.

The many displays of cascading water can sound thunderous, as the fountains recycle an astonishing 100,000 gallons of water every minute. Their presence isn’t a random choice: they reflect FDR’s appreciation for the importance of H2O. As someone afflicted with polio, he understood the rehabilitative powers of water exercises and established the Warm Springs Institute in Georgia to help others with polio. As president, FDR supported several water projects, including the creation of the Tennessee Valley Authority. A favorite time to visit the memorial is at night, when dramatic lighting reveals the waterfalls and statues against the dark parkland. (Note: Fountains are shut off in cold weather.)

Conceived in 1946, the FDR Memorial had been in the works for 50 years. Part of the delay in its construction can be attributed to the president himself: FDR had told his friend, Supreme Court Justice Felix Frankfurter, “If any memorial is erected to me, I know exactly what I should like it to be. I should like it to consist of a block about the size of this (putting his hand on his desk) and placed in the center of that green plot in front of the Archives Building.” In fact, such a memorial and plaque sit in front of the National Archives (Pennsylvania Ave. entrance). Friends and relatives struggled to honor Roosevelt’s request to leave it at that, but Congress and national sentiment overrode them.

As with other presidential memorials, this one opened to some controversy. Advocates for people with disabilities were incensed that the memorial sculptures did not show the president in a wheelchair, which he used after he contracted polio. The National Organization on Disability raised funds for the additional statue of a wheelchair-bound FDR; it’s at the very front of the memorial, to the right as you approach the first gallery. In the gift shop is a replica of Roosevelt’s wheelchair, as well as a rare photograph of the president sitting in a wheelchair. The memorial is probably the most accessible tourist attraction in D.C.; as at most National Park Service locations, wheelchairs are available for free use on-site. Thirty minutes is sufficient for a visit.