Ohio Dr. SW, at the south shore of the Tidal Basin (in West Potomac Park) 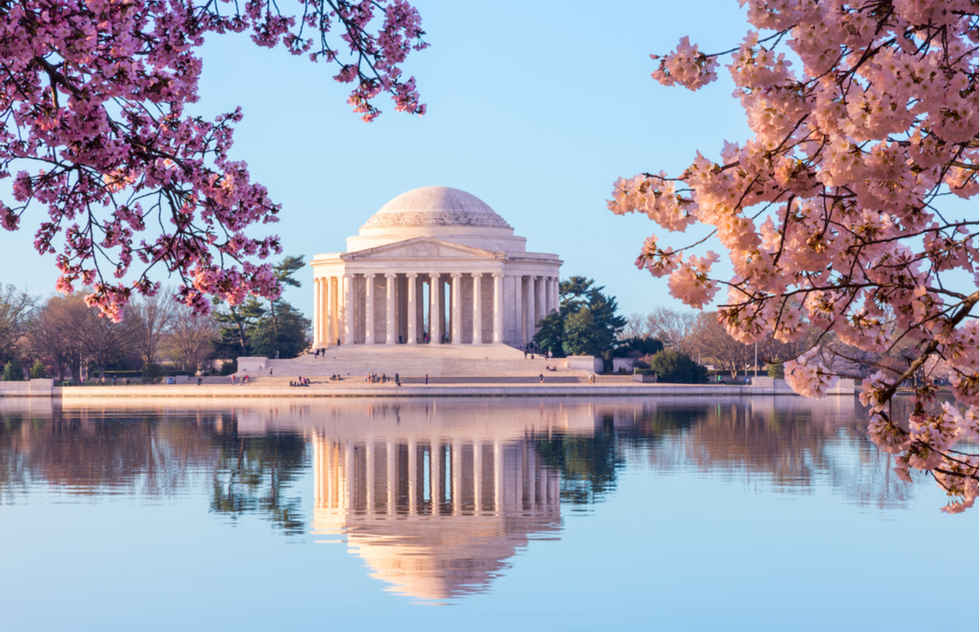 President John F. Kennedy, at a 1962 dinner honoring 29 Nobel Prize winners, told his guests that they were “the most extraordinary collection of talent, of human knowledge, that has ever been gathered together at the White House, with the possible exception of when Thomas Jefferson dined alone.” Jefferson penned the Declaration of Independence and served as George Washington’s secretary of state, John Adams’s vice president, and America’s third president. He spoke out against slavery—although, like many of his countrymen, he kept slaves himself. He also established the University of Virginia and pursued wide-ranging interests, including architecture, astronomy, anthropology, music, and farming.

Franklin Delano Roosevelt, a great admirer of Jefferson, spearheaded the effort to build him a memorial, although the site choice was problematic. The Capitol, the White House, and the Mall were already located in accordance with architect Pierre L’Enfant’s master plan for the city, and there was no spot for such a project that would maintain L’Enfant’s symmetry. So, the memorial was built on land reclaimed from the Potomac River, perched upon the lip of the manmade reservoir now known as the Tidal Basin. Roosevelt laid the memorial cornerstone in 1939 and had all the trees between the Jefferson Memorial and the White House cut down so that he could see the memorial every morning.

The memorial is a columned rotunda in the style of the Pantheon in Rome, whose classical architecture Jefferson himself introduced to this country (he designed his home, Monticello, and the earliest University of Virginia buildings in Charlottesville). On the Tidal Basin side, the sculptural group above the entrance depicts Jefferson with Benjamin Franklin, John Adams, Roger Sherman, and Robert Livingston, all of whom worked on drafting the Declaration of Independence. The domed interior of the memorial contains the 19-foot bronze statue of Jefferson standing on a 6-foot pedestal of black Minnesota granite. The sculpture is the work of Rudolph Evans, chosen from among more than 100 artists in a nationwide competition. Jefferson is depicted wearing a fur-collared coat given to him by his close friend, the Polish General Tadeusz Kościuszko. If you follow Jefferson’s gaze, you see that the Jefferson Memorial and the White House have an unimpeded view of each other.