On the western end of the Mall, at 23rd St. NW (btw. Constitution and Independence aves.) 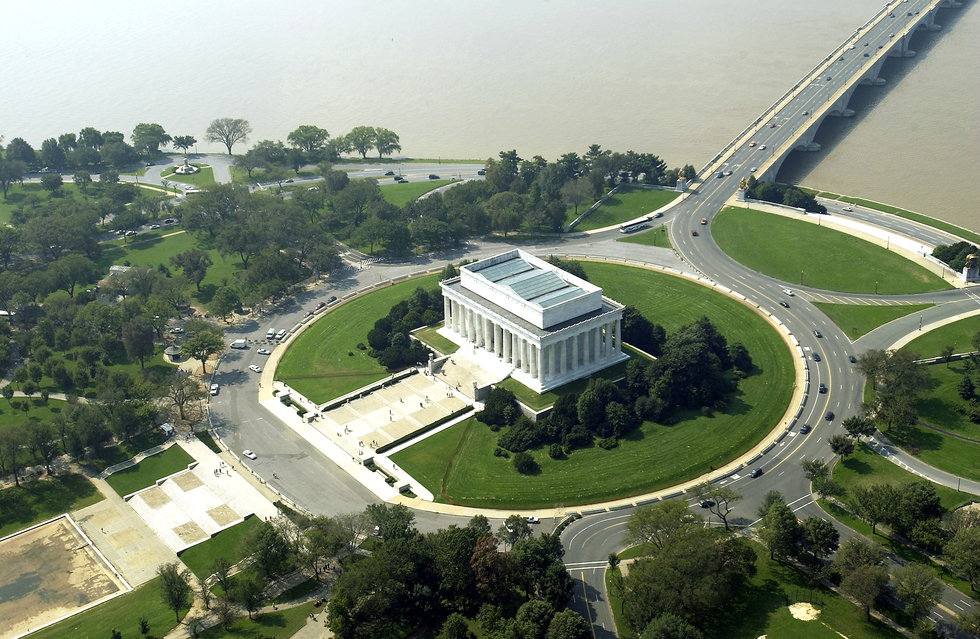 When famed architect Charles Follen McKim was asked to work on the 1902 McMillan Commission to reshape the overall design for the Mall, he made his views clear on what he felt would be an important addition. “As the Arc de Triomphe crowns Place de l’Étoile in Paris, so should stand a memorial erected of the memory of that one man in our history as a nation who is worthy to be joined with George Washington—Abraham Lincoln.”

Location was key, but where the monument should be was not entirely obvious: Until the late 1800s, a wider Potomac River had bumped up against the western edge of the National Mall. It was only after the Army Corps of Engineers had first reclaimed land from the river and created a mile-wide westward expanse of new terrain, and then landscaped and engineered the muddy morass, that the choice was clear. The memorial for honoring the president who had saved the Union would preside at one end of the Mall on a direct axis to the Washington Monument honoring the nation’s founding president, both sites linked on the same axis further still to the symbol of the country itself, the U.S. Capitol, at the eastern end of the Mall.

Construction began in 1914, and what a job it was, shoring up the unstable wetlands and creating a foundation strong enough to support the majestic memorial that architect Henry Bacon had designed. The foundation rests on concrete piles that extend from 44 to 65 feet from original grade to bedrock. The retaining wall, keeping the river at bay, measures 257 feet wide by 187 feet deep by 14 feet high. The Lincoln Memorial itself weighs 38,000 tons. The monument finally opened in 1922 after 8 years of construction.

The neoclassical templelike structure, similar in architectural design to the Parthenon in Greece, has 36 fluted Doric columns representing the states of the Union at the time of Lincoln’s death, plus two at the entrance. On the attic parapet are 48 festoons symbolizing the number of states in 1922. (Hawaii and Alaska are noted in an inscription on the terrace.) Due east is the Reflecting Pool, lined with American elms and stretching 2,000 feet toward the Washington Monument and the Capitol beyond.

The memorial chamber has limestone walls inscribed with the Gettysburg Address and Lincoln’s second inaugural address. Two 60-foot-high murals by Jules Guerin on the north and south walls depict, allegorically, Lincoln’s principles and achievements. On the south wall, an Angel of Truth freeing a slave is flanked by groups of figures representing Justice and Immortality. The north-wall mural portrays the unity of North and South, and is flanked by groups of figures symbolizing Fraternity and Charity.

Most powerful, however, is Daniel Chester French’s seated statue of Lincoln. Lincoln sits, gazing down on the visitors at his feet, the burdens of guiding the Union through the Civil War etched deeply in his face. Though 19 feet tall, the figure is eerily lifelike and exudes a fatherly compassion. Some say that his hands create the sign-language shapes for A (Abraham) and L (Lincoln), as a tribute to the fact that Lincoln signed legislation giving Gallaudet University, a school for the deaf, the right to confer college degrees. The National Park Service denies the symbolism, but it should be noted that French’s own son was deaf, so the sculptor did know sign language.

Lincoln’s legacy has made his memorial the site of numerous demonstrations by those seeking justice. Most notable was a peaceful demonstration of 250,000 people on August 28, 1963, at which Martin Luther King, Jr., proclaimed, “I have a dream.” Look for the words I HAVE A DREAM. MARTIN LUTHER KING, JR., THE MARCH ON WASHINGTON FOR JOBS AND FREEDOM, AUGUST 28, 1963, inscribed and centered on the 18th step down from the chamber. The inscription, which the National Park Service added in July 2003, marks the precise spot where King stood to deliver his famous speech.

Thirty minutes is sufficient time for viewing this memorial.