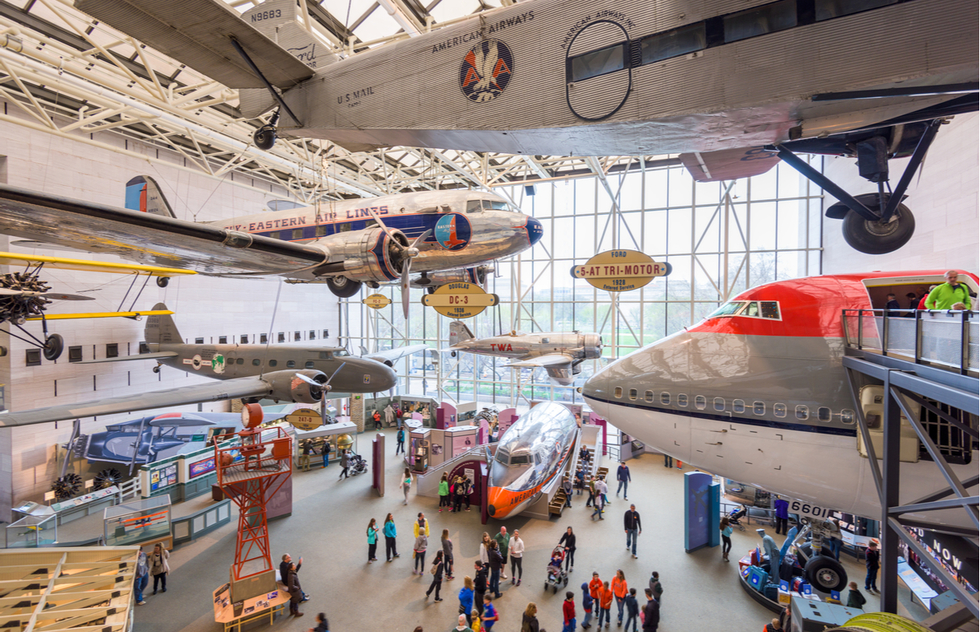 Big news: The National Air and Space Museum has embarked on an enormous, multi-year, nearly $1 billion makeover that will transform the entire visitor experience and is expected to be fully completed by 2025. At press time, the museum announced it will close completely for 6 months, until the fall of 2022, to begin the first phase of renovations. Check status before going. When it reopens, expect to still see sections closed on a rolling basis. But even with renovations ongoing, rest assured that there's lots to see here. For example, the Spirit of St. Louis, the 1903 Wright Flyer, Bell X-1, the Apollo Lunar Module, and Skylab are all housed here, currently in a massive ground floor hall that traces the history of air transportation and explores how technology revolutionized air travel.

Based on visitation numbers (7 million annually, prior to the renovation), this is among America’s favorite museums. And even in its current state, it’s not hard to understand why. The National Air and Space Museum manages to tap into that most primordial of human impulses: the urge to fly. And it does so in a multi-layered fashion, mixing extraordinary artifacts with IMAX movies, videos, and hands-on exploration of displayed equipment.

The seeds of this museum were planted when the Smithsonian Institution acquired its first aeronautical objects in 1876: 20 kites from the Chinese Imperial Commission. By the time the National Air and Space Museum opened on the National Mall 100 years later, the collection had grown to tens of thousands of objects. Today, the inventory of historic aircraft and spacecraft artifacts numbers more than 66,000, the world’s largest such collection.

The place is huge, as is much of its collection. Enormous aircraft and spacecraft dangle from the ceiling or are placed in floor exhibits throughout both levels. Visitors of all ages, but mostly families, take pictures of each other against the backdrops of the towering Pershing II (34.8 ft.) and SS20 Pioneer (54.1 ft.) missiles, or the Hubble Space Telescope (42 ft.), or just about anything in the museum, as most of the artifacts dwarf humans. Tours and demonstrations are in constant rotation.

Our hope is that once the dust settles in 2025 (and hopefully sooner), the new visitor experience will include less time waiting in lines, which can be daunting at this always-busy museum, especially with little kids in tow. Fingers crossed that those museum designers are paying lots of attention to joy-zapping frustrations like standstill crowds and bottlenecks to see the most popular exhibits.

Currently, first-floor galleries cover the Space Race and the development of huge telescopes (Explore the Universe); the space-themed galleries upstairs highlight Exploring the Moon and Time and Navigation in space.

The central area on both floors takes a look at historic milestones and individuals in aviation and space research and development: Space and aviation artifacts in the first-floor Boeing Milestones of Flight Hall illustrate ways that aviation and flight transformed the world. This is where you’ll see the first American jet aircraft, the Spirit of St. Louis ★★, flown solo by Charles Lindbergh across the Atlantic Ocean.

If you’re short on time or simply overwhelmed, there are two things you shouldn’t miss. The Sky Lab Orbital Workshop ★★★, in the Space Race gallery on the first floor (you enter the spaceship on the second floor), allows you to walk through the country’s first space station. You’re actually inside the astronauts’ living quarters; if you look up, you’ll see that most of the rocket’s construction lies overhead. And be sure to visit the second-floor Wright Brothers exhibit, where the Wright brothers’ 1903 Flyer ★★★, the world’s first successful airplane, is on display.

Amateur astronomers should head outside to the museum’s east terrace to peer through the telescopes in the Phoebe Waterman Haas Public Observatory. The observatory, when it’s in service, is free and open to the public for daytime sightings of moon craters and sunspots, and once or twice a month for nighttime observations (more info on the website). At press time, the museum’s popular Albert Einstein Planetarium was closed as part of the museum’s ongoing renovations; check the website for updates on its scheduled return.

Wonder where the museum has put all of the aircraft and equipment that used to occupy the west wing? Much of it now resides temporarily in the National Air and Space Museum’s companion location, the Steven F. Udvar-Hazy Center, adjacent to Washington Dulles International Airport. If you’re hungry to see more aviation artifacts and spacecraft, or if you’ve got a flight leaving from Dulles Airport and have time to kill, drive the 25 miles out to the satellite museum. Here you can explore one huge hangar filled with aviation objects and another with space objects, each arranged by subject (Commercial Aviation, Korea and Vietnam Aviation, Sport Aviation, and so on). Perhaps the center’s most notable artifact is the enormous space shuttle Discovery that retired in 2011. A Lockhead SR-71 Blackbird, the world’s fastest-jet-propelled aircraft, is also here, along with the Concorde, the first supersonic airliner. IMAX movies and simulator rides also are options. Note: Admission is free at Udvar-Hazy, but there is a $15 fee for parking before 4pm.