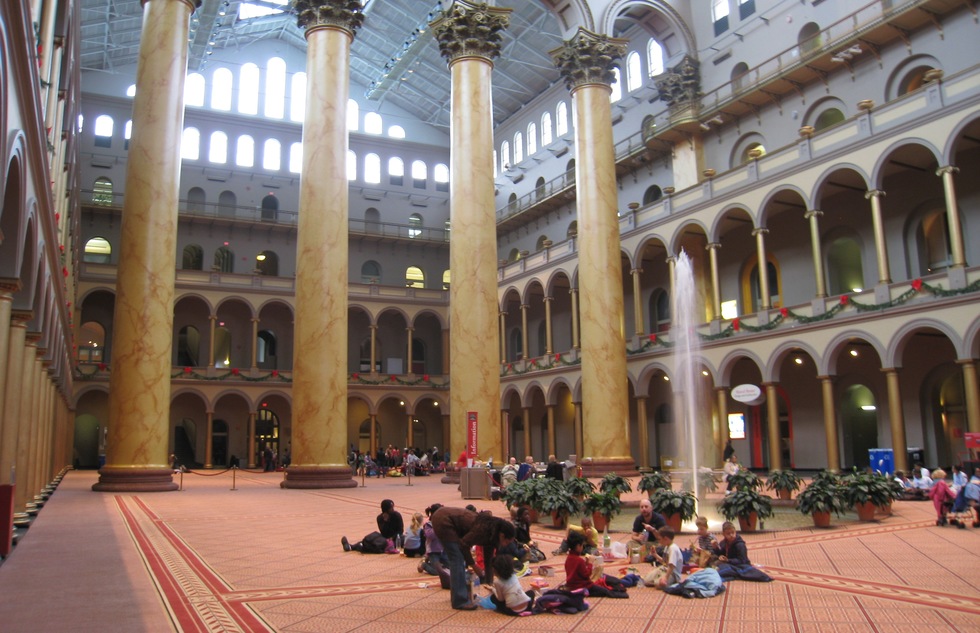 The first thing you notice about the National Building Museum is the actual building, its pressed redbrick exterior and decorative terra-cotta frieze, and its size, 400 feet by 200 feet, big enough to hold a football field. Inside the impressive Great Hall is an Italian Renaissance courtyard, colossal Corinthian columns, 15-story-high ceiling, and central fountain. The structure, modeled after an Italian palazzo, was designed to house the Pension Bureau (its offices were located in those upper arcaded areas, overlooking the atrium) and to serve as a venue for grand galas. The building hosted its first event, President Grover Cleveland’s inaugural ball, in 1885, even before construction was completed in 1887, and it’s been the site of such balls and other events ever since.

In the 1980s, the building took on a new purpose as a museum dedicated to architecture, landscape architecture, engineering, urban planning, and historic preservation and opened to the public in 1985 as the National Building Museum. You can view the Great Hall and take a historic building tour for free, but the museum charges a fee to tour its exhibits, which are mounted in the galleries off the Great Hall on the first and second floors and change yearly. The museum’s year-round Play Work Build exhibit is a favorite for families. Its other long-term exhibit House & Home examines the varying ways houses are built and what it really means to be at home in America.

If you’re here in summer, you’ve got to stop by to experience the super-fun, interactive “Summer Block Party” that takes over the entire expanse of the Great Hall; one year it was a “beach” of nearly 1 million translucent plastic balls. Another year, it was a massive lawn, complete with hammocks and plenty of space to daydream. The museum gift shop is an especially good one, as is the on-site eatery Firehook Bakery.

Speaking of gift shops: Washington’s museum shops hold a treasure trove of unusual gifts. I’ve always had a weakness for the shop at the National Building Museum, which is jammed with surprising, useful, and cleverly designed housewares and interesting games, including bookends embossed with Celtic designs, Bauhaus mobiles, and collapsible strainers. And I can never visit the National Gallery of Art without lingering a little while in the store to admire captivating catalog books, notecards, posters, children’s games, and a slew of other things. The Smithsonian’s National Museum of African Art has unusual items from all over Africa, but I especially liked the interesting designs of the colorful dish towels, handbags, and headbands from Ghana.