Part of National Mall and Memorial Parks, bordering the Potomac River along the west and southwest ends 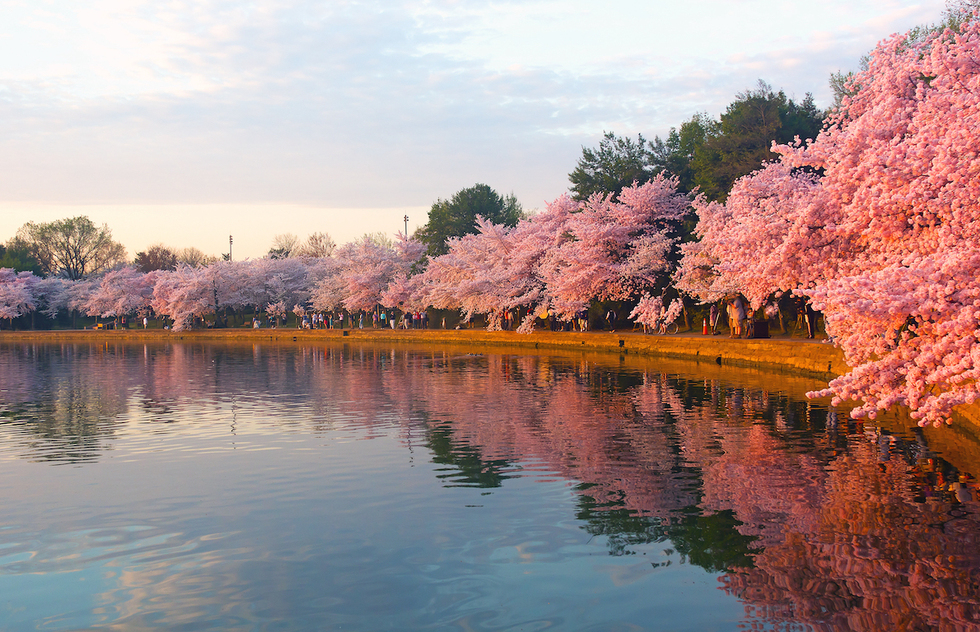 The National Mall and Memorial Parks’ individual spaces known as West and East Potomac parks are 720 riverside acres divided by the Tidal Basin. The parkland is most famous for its display of cherry trees, which bloom for a mere 2 weeks, tops, every spring, as they have since the city of Tokyo first gave the U.S. capital the gift of the original 3,000 trees in 1912. Today more than 3,750 cherry trees grow along the Tidal Basin in West Potomac Park, East Potomac Park, the Washington Monument grounds, and other pockets of the city.

The sight of the delicate cherry blossoms is so special that the whole city joins in cherry-blossom-related hoopla, throwing the National Cherry Blossom Festival (Mar 20–Apr 14, 2019). The National Park Service devotes a home page to the subject, www.nps.gov/cherry, and the National Cherry Blossom Festival officially has another: www.nationalcherryblossomfestival.org. The trees usually begin blooming sometime between March 20 and April 17; April 4 is the average date at which the blooms reach their peak, defined as the point at which 70% of the Tidal Basin–sited cherry trees have blossomed.

To get to the Tidal Basin by car (not recommended in cherry-blossom season—actually, let me be clear: impossible in cherry-blossom season), you want to get on Independence Avenue and follow the signs posted near the Lincoln Memorial that show you where to turn to find parking. If you’re walking, cross Independence Avenue where it intersects with West Basin Drive and follow the path to the Tidal Basin. There is no convenient Metro stop near here. If you don’t want to walk or ride a bike, your best bet is a taxi.

West Potomac Park encompasses Constitution Gardens; the Vietnam, Korean, Lincoln, Jefferson, World War II, and FDR memorials; the D.C. World War I Memorial; the Reflecting Pool; the Tidal Basin and its paddleboats; and countless flower beds, ball fields, and trees. More than 1,500 cherry trees border the Tidal Basin, some of them Akebonos with delicate pink blossoms, but most are Yoshinos with white, cloudlike flower clusters.

East Potomac Park has 1,701 cherry trees in 10 varieties. The park also has picnic grounds, tennis courts, three golf courses, a large swimming pool, and biking and hiking paths by the water. East Potomac Park’s Hains Point is located on a peninsula extending into the Potomac River; locals love to ride their bikes out to the point; golfers love to tee up in view of the Washington Monument. See “Active Pursuits" for further information.