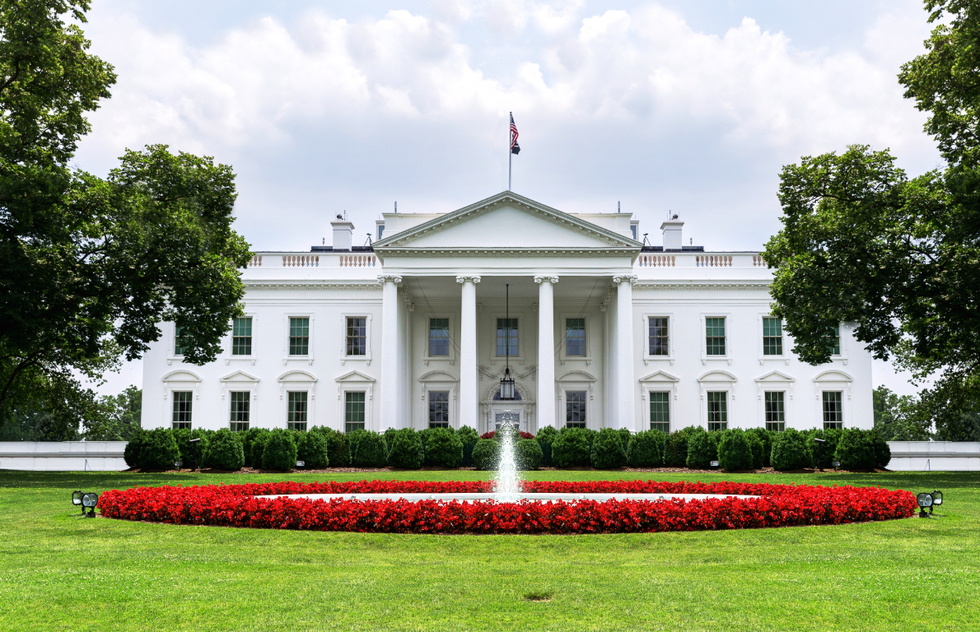 This house has served as residence, office, reception site, and world embassy for every U.S. president since John Adams. The White House is the only private residence of a head of state in the world that opens regularly to the public, free of charge, a practice that Thomas Jefferson inaugurated.

Many visitors to Washington never set foot inside the White House; they gaze at the building’s North Portico through a tall fence on Pennsylvania Ave. or walk around to look up at the South Portico from the Ellipse. (Sometimes when there are events or security concerns access is fenced off on both sides.)

If you are lucky enough to score a tour, keep in mind that meanwhile, somewhere in this very building, the president and staff are meeting with foreign dignitaries, congressional members, and business leaders, hashing out the most urgent national and global decisions. Scroll to the end to see more info on tours.

An Act of Congress in 1790 established the city now known as Washington, District of Columbia, as the seat of the federal government. George Washington and city planner Pierre L’Enfant chose the site for the president’s house and staged a contest to find a builder. Although Washington picked the winner—Irishman James Hoban—he was the only president never to live in the White House. The structure took 8 years to build, starting in 1792, when its cornerstone was laid. Its facade is made of the same stone used to construct the Capitol. The mansion quickly became known as the “White House,” thanks to the limestone whitewashing applied to the walls to protect them, later replaced by white lead paint in 1818. In 1814, during the War of 1812, the British set fire to the White House and gutted the interior; the exterior managed to endure only because a rainstorm extinguished the fire. What you see today is Hoban’s basic creation: a building modeled after an Irish country house.

Insider tip: Tours of the White House exit from the North Portico. Before you descend the front steps, look to your left to see the window whose sandstone still remains unpainted as a reminder of the 1814 fire.

Additions over the years have included the South Portico in 1824, the North Portico in 1829, and electricity in 1891, during Benjamin Harrison’s presidency. In 1902, repairs and refurnishing of the White House cost nearly $500,000. No other great change took place until Harry Truman’s presidency, when the interior was completely renovated after the leg of Margaret Truman’s piano cut through the dining room ceiling. The Trumans lived at Blair House across the street for nearly 4 years while the White House interior was shored up with steel girders and concrete.

In 1961, First Lady Jacqueline Kennedy spearheaded the founding of the White House Historical Association and formed a Fine Arts Committee to help restore the famous rooms to their original grandeur, ensuring treatment of the White House as a museum of American history and decorative arts. “It just seemed to me such a shame when we came here to find hardly anything of the past in the house, hardly anything before 1902,” Mrs. Kennedy observed.

Every president and first family put their own stamp on the White House. President Trump has made subtle changes to the Oval Office, replacing maroon drapes with gold and swapping out camel-colored leather chairs with those covered in pale yellow fabric. The Obamas installed artworks on loan from the Hirshhorn Museum and the National Gallery of Art in their private residence, and chose works to hang in the public rooms of the White House. (Changing the art in the public rooms requires approval from the White House curator and the Committee for the Preservation of the White House.) Michelle Obama planted a vegetable garden on the White House grounds, and President Obama altered the outdoor tennis court so that it could be used for both basketball and tennis.

Highlights of the public tour include the gold and white East Room, the scene of presidential receptions, weddings, major presidential addresses, and other dazzling events. This is where the president entertains visiting heads of state and the place where seven of the eight presidents who died in office (all but James Garfield) laid in state. It’s also where Nixon resigned. The room’s early-18th-century style was adopted during the Theodore Roosevelt renovation of 1902; it has parquet Fontainebleau oak floors and white-painted wood walls with fluted pilasters and classical relief inserts. Note the famous Gilbert Stuart portrait of George Washington that Dolley Madison saved from the British torch during the War of 1812; the portrait is the only object to have remained continuously in the White House since 1800 (except during reconstructions).

The Red Room, with its red-satin-covered walls and Empire furnishings, is used as a reception room, primarily for afternoon teas. Several portraits of past presidents and a Gilbert Stuart portrait of Dolley Madison hang here. Dolley Madison used the Red Room for her famous Wednesday-night receptions.

From the Red Room, you’ll enter the State Dining Room. Modeled after late-18th-century neoclassical English houses, this room is a superb setting for state dinners and luncheons. Below G. P. A. Healy’s portrait of Lincoln is a quote taken from a letter written by John Adams on his second night in the White House (FDR had it carved into the mantel): I PRAY HEAVEN TO BESTOW THE BEST OF BLESSINGS ON THIS HOUSE AND ON ALL THAT SHALL HERE-AFTER INHABIT IT. MAY NONE BUT HONEST AND WISE MEN EVER RULE UNDER THIS ROOF.

The How-to's of Touring the White House

While specific tour logistics vary slightly with each administration, one thing’s consistent: You must have a reservation to tour the White House. No fewer than 21 days and as far as 3 months in advance of your trip, contact the office of one of your senators or representatives to request the tour, provide the number of people in your group, and ask for a specific tour date. Check your rep’s website first (senate.gov or house.gov), since some members instruct you to call, while others require you to submit an online request; some members do not provide this constituent service at all. The tour coordinator consults with the White House on availability, and, if your requested date is available, submits your contact details and the size of your group to the White House. The White House then sends you confirmation of receipt of your request and asks you to register for the tour by submitting the names, birth dates, Social Security numbers (for those 18 and over), and other info for each person in your party. The White House reviews the information and contacts you 2 to 3 weeks before your requested date to let you know whether your request has been approved or denied. If approved, your confirmation letter/e-mail will include a confirmation number, the list of people in your group, and the date and time of your confirmed tour. (Note: International visitors should contact their embassy to submit a tour request. Some countries such as Australia and Canada do not currently organize tours.)

Hours: White House tours are available to the general public year-round from 7:30 to 11:30am Tuesday through Thursday and 7:30am to 1:30pm Friday and Saturday, and at other times depending on the president’s schedule. If the president is out of town, it’s possible that more tours will be allowed past the usual cutoff time.

Format and timing: Tours are self-guided. Most people take no more than an hour to go through. Arrive about 15 minutes before your scheduled tour time.

Entry and ID: You’ll enter at the side of East Executive Avenue, near the Southeast Gate of the White House. Bring valid, government-issued photo IDs whose information exactly matches that which you provided to your congressional member’s office. Everyone in your party who is 18 or older must have an ID.

Important: On the day of your tour, call tel. 202/456-7041 to make sure the White House is open to the public that day and that your tour hasn’t been canceled.

Do not bring the following prohibited items: Backpacks, book bags, handbags, or purses; food and beverages; strollers; video recorders; tobacco products; personal grooming items, from cosmetics to hairbrushes; any pointed objects, whether a pen or a knitting needle; aerosol containers; guns; ammunition; fireworks; electric stun guns; maces; martial arts weapons/devices; or knives of any kind. Smartphones are okay, as are small cameras. The White House does not have a coat-check facility, so there is no place for you to leave your belongings while you take the tour. There are no public restrooms or telephones in the White House. Best advice: Leave everything but your wallet and camera back at the hotel.