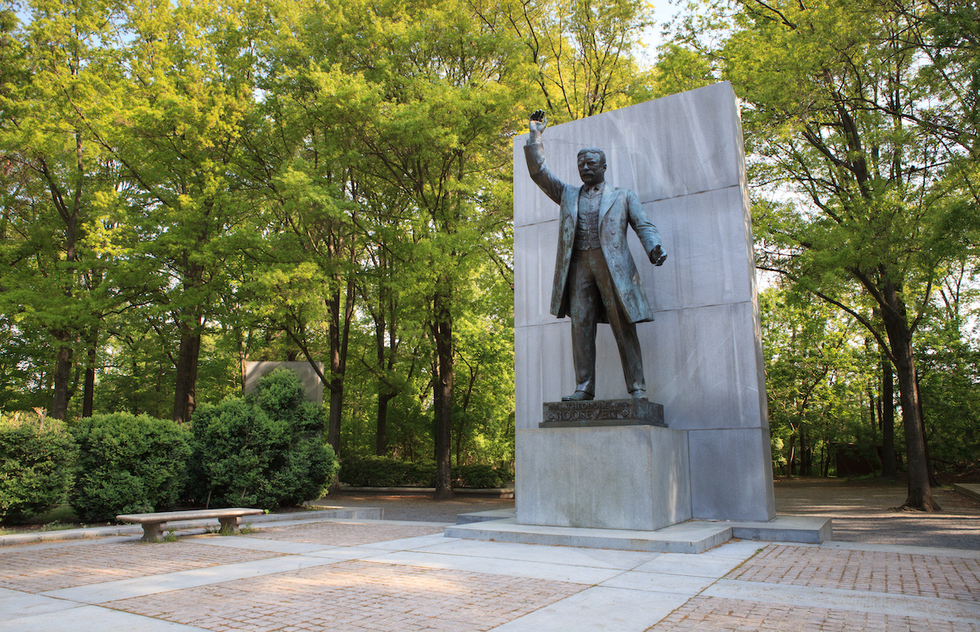 A serene, 88 1/2-acre wilderness preserve, Theodore Roosevelt Island is a memorial to the nation’s 26th president in recognition of his contributions to conservation. During his administration, Roosevelt, an outdoor enthusiast and expert field naturalist, set aside a total of 234 million acres of public lands for forests, national parks, wildlife and bird refuges, and monuments.

Native American tribes were here first, inhabiting the island for centuries until the arrival of English explorers in the 1600s. Over the years, the island passed through many owners before becoming what it is today—an island preserve of swamp, marsh, and upland forest that’s a haven for rabbits, chipmunks, great owls, foxes, muskrats, turtles, and groundhogs. It’s a complex ecosystem in which cattails, arrow arum, and pickerelweed grow in the marshes, and willow, ash, and maple trees root on the mud flats. You can observe these flora and fauna in their natural environs on 2.5 miles of foot trails.

In the northern center of the island, overlooking a terrace encircled by a water-filled moat, stands a 17-foot bronze statue of Roosevelt. Four 21-foot granite tablets are inscribed with tenets of his conservation philosophy.

To drive to the island, take the George Washington Memorial Parkway exit north from the Theodore Roosevelt Bridge. The parking area is accessible only from the northbound lane; park there and cross the pedestrian bridge that connects the lot to the island. You can also rent a canoe at Thompson Boat Center or Key Bridge Boathouse  and paddle over, making sure to land at the north or northeast corner of the island; there is no place to secure the boat, so you’ll need to stay with it. Or take the Metro to the Rosslyn Metro station, walk toward Key Bridge, and follow the short connecting trail leading downhill from the downstream side of the river and across the parkway into the parking lot. Expect bugs in summer and muddy trails after a rain.