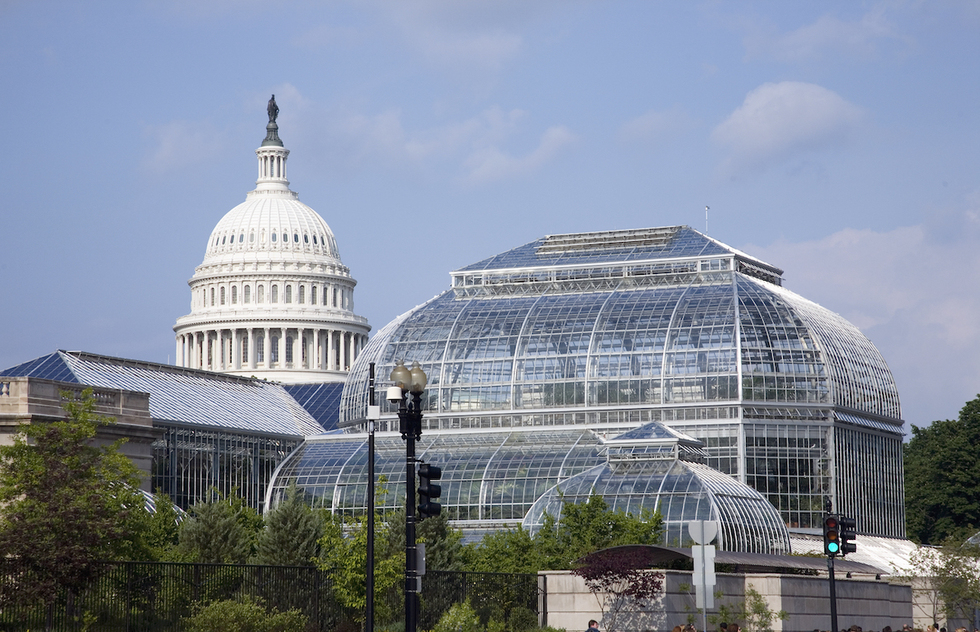 For the feel of summer in the middle of winter and the sight of lush, breathtakingly beautiful greenery and flowers year-round, stop in at the Botanic Garden, located at the foot of the Capitol and next door to the National Museum of the American Indian. The grand conservatory devotes half of its space to exhibits that focus on the importance of plants to people, and half to exhibits that focus on ecology and the evolutionary biology of plants. But those finer points may escape you as you wander through the various chambers, outdoors and indoors, upstairs and down, gazing in stupefaction at so much flora. Throughout its 10 “garden rooms” and two courtyards, the conservatory holds about 1,300 living species, or about 25,000 plants. Individual areas include a high-walled enclosure, called “the Tropics,” of palms, ferns, and vines; an Orchid Room; a garden of plants used for medicinal purposes; a primeval garden; and seasonal gardens created especially for children. Stairs and an elevator in the Tropics take you to a mezzanine level near the top of the greenhouse, where you can admire the jungle of greenery 24 feet below and, if condensation on the glass windows doesn’t prevent it, a view of the Capitol Building. Just outside the conservatory is the National Garden, which includes the First Ladies Water Garden, a formal rose garden, a butterfly garden, an amphitheater, and a lawn terrace. Tables and benches make this a lovely spot for a picnic, though much of the garden is unshaded.

The garden annex across the street holds Bartholdi Park. It’s about the size of a city block and features a cast-iron classical fountain created by Frédéric Auguste Bartholdi, designer of the Statue of Liberty. Flower gardens bloom amid tall ornamental grasses, benches are sheltered by vine-covered bowers, and a touch and fragrance garden contains such herbs as pineapple-scented sage. Spring through fall, this is a pleasant place to enjoy a picnic at one of the many umbrella tables.

Note: When you visit Bartholdi Park, you may notice the American Veterans Disabled for Life Memorial (tel. 877/426-6838; www.nps.gov/nama/planyourvisit/american-veterans-disabled-for-life.htm or www.avdlm.org), located just across the street at 150 Washington Ave. SW. With its star-shaped fountain, continuously running reflecting pool, and panels of laminated glass etched with the images and quotations of injured soldiers, the memorial pays tribute to the more than 4 million soldiers injured while serving their country.