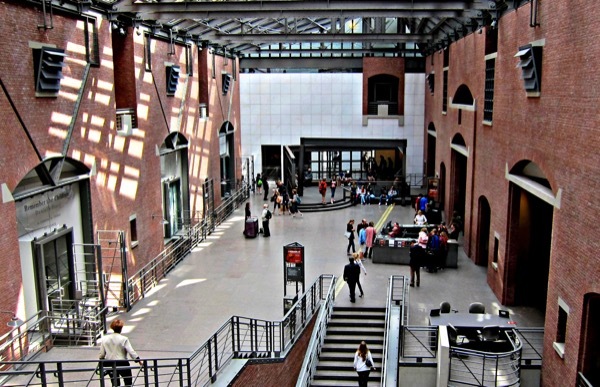 The Holocaust Museum documents Nazi Germany’s systematic persecution and annihilation of 6 million Jews and others between 1933 and 1945, presenting visitors with individual stories of both horror and courage in the persecuted people’s struggle to survive. The museum calls itself a “living memorial to the Holocaust,” the idea being for people to visit, confront the evil of which mankind is capable, and leave inspired to face down hatred and inhumanity when they come upon it in the world. A message repeated over and over is this one of Holocaust survivor and author Primo Levi: “It happened. Therefore it can happen again. And it can happen everywhere.” Since the museum opened in 1993, more than 43 million visitors have taken home that message, and another: “What you do matters.”

You begin your tour of the permanent exhibit on the first floor, where you pick the identity card of an actual Holocaust victim, whose fate you can learn about in stages at different points in the exhibit. Then you ride the elevator to the fourth floor, where “Nazi Assault, 1933–1939” covers events in Germany, from Hitler’s appointment as chancellor in 1933 to Germany’s invasion of Poland and the official start of World War II in 1939. You learn that anti-Semitism was nothing new, and observe for yourself in newsreels how Germans were bowled over by Hitler’s powers of persuasion and propaganda. Exhibits tell stories of desperation, like the voyage of the St. Louis passenger liner in May 1939, which sailed from Germany to Havana with 900 Jews, but was turned away and returned to Europe.

The middle floor of the permanent exhibit covers the years 1940 to 1945, laying bare the horrors of the Nazi machine’s “Final Solution” for the Jews, including deportations, the ghetto experience, and life and death in the concentration camps. Survivors tell their stories in taped recordings. Throughout the museum are artifacts like transport rail cars, reconstructed concentration camp barracks, and photographs of “killing squad” executions. One of the most moving exhibits is the “Tower of Faces,” which contains photographs of the Jewish people who lived in the small Lithuanian town of Eishishok for some 900 years, before the Nazis killed nearly all, in 2 days in September 1941.

“The Last Chapter,” on the second floor, documents the stories of heroes, like the king of Denmark, who was able to save the lives of 90% of Denmark’s Jewish population. Exhibits also recount the Allies’ liberation of the concentration camps and aftermath events, from Jewish emigration to America and Israel to the Nuremberg trials. At exhibit’s end is the hour-long film, Testimonies, in which Holocaust survivors tell their stories. The tour finishes in the Hall of Remembrance, a place for meditation and reflection and where you may light a memorial candle.

Don’t overlook the first-floor and lower-level exhibits. Always on view are “Daniel’s Story: Remember the Children,” for children 8 and older, and the “Wall of Remembrance” (Children’s Tile Wall), which commemorates the 1.5 million children killed in the Holocaust. The lower level is also the site for special exhibits. The museum also houses a Resource Center that includes a registry of Holocaust survivors and victims, a library, and archives, all of which are available to anyone who wants to research family history or the Holocaust.

Note: The museum’s permanent exhibit is not recommended for children 11 and under; for older children, it’s advisable to prepare them for what they’ll see.

There’s a cafeteria and museum shop on the premises.