Adjacent to the FDR Memorial, along the northwest side of the Tidal Basin, at Independence Ave. SW, in West Potomac Park, USA 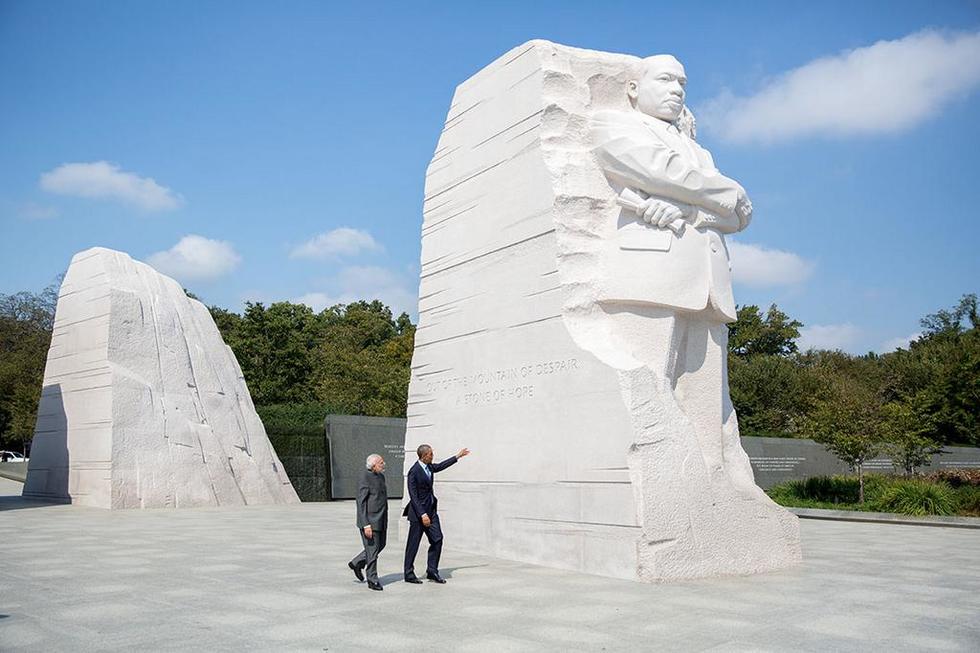 I must confess my disappointment in the Martin Luther King, Jr. Memorial, which provides little context for King’s life and work as, arguably, the United States’ most important civil rights activist. I would have preferred a memorial more like the one for FDR, whose panels illustrate scenes from FDR’s presidency; or like Lincoln’s or Jefferson’s, whose remarkable words are rendered more fully in the stone walls. Still, the very fact of its existence, here on the Mall among memorials to presidents and to those who fought in U.S. wars, affirms King’s critical role in American history.

Authorized by Congress in 1996, the memorial debuted on October 16, 2011. Hurricane Irene prevented it from opening on its originally planned date, August 28, exactly 48 years after the Rev. Dr. Martin Luther King, Jr., delivered his momentous “I Have a Dream” speech on the steps of the Lincoln Memorial. On that original date, some 250,000 people gathered on the Mall during the March on Washington for Jobs and Freedom to pressure Congress to pass the Civil Rights Act. King was assassinated on April 4, 1968, at the age of 39.

The memorial’s site along the northwest lip of the Tidal Basin is significant for the “visual line of leadership” it creates between the Lincoln Memorial, representing the principles of equality and civil rights as embodied in the personage of Abraham Lincoln and carried forward in King, and the Jefferson Memorial, which symbolizes the democratic ideals of the founding fathers. Set on a crescent-shaped, 4-acre parcel of land surrounded by the capital’s famous cherry trees, the mammoth sculpture (created in China, a controversial decision) rests on 300 concrete piles driven into the muddy basin terrain. A 28-foot, 6-inch statue of Dr. King in a business suit, arms folded, stands front and center, representing the “Stone of Hope”; he is flanked by two enormous background pieces, representing the “Mountain of Despair.” A curving boundary wall enclosing the grounds perhaps commemorates the slain civil rights leader best, with inscriptions of excerpts from his remarkable sermons and speeches.

The memorial includes a bookstore and restrooms.

Adjacent to the FDR Memorial, along the northwest side of the Tidal Basin, at Independence Ave. SW, in West Potomac Park USA Washington, D.C.