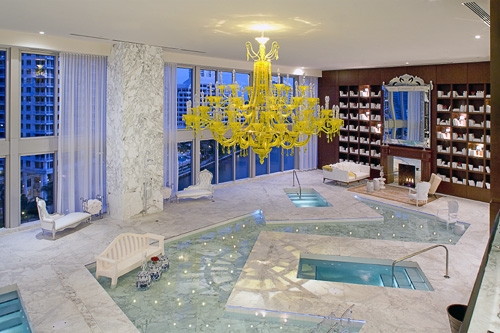 The Heat Is on Miami

By
Miami Vice-roy
If you wanted to vacation in Miami without ever leaving your hotel, the Viceroy Miami (485 Brickell Ave., tel. 305/503-4400; www.viceroymiami.com) would be the place to do it. The Kelly Wearstler-designed hotel has everything you could want or need, and even things you never thought you did, from iPods, laptops, and game systems to Vespas, the longest infinity-edge pool in the state, and a mini "grocery" store. Rooms, a soft sea-foam green, are accented by Asian art and have balconies with either downtown or river views (staff will also come and set up sun chairs for you). A kitchenette has all the pots and pans you'd need, and stylish wood panels slide to cover it up and/or reveal the closet. Bathrooms are large, with double sinks and tons of counter space and storage. Distractions unfold outside your room, and it wasn't until an official tour that we discovered all the amazing spaces here, including the aforementioned pool and the pretty common areas surrounding it; the beautiful Philippe Starck-designed spa (check out the wading pool at its center, surrounded by bookshelves that stretch to the ceiling, where a giant chandelier hangs, and the movie screening room); and the secret poker room off the pool. The hotel's rooftop nightlife spot, Club 50, offers a pool, live DJ, a light Mediterranean menu, and great views of the bay. The restaurant, Eos, is an odd combo of flamingo pink, gray, orange, and lime green that would be disastrous in, say, your friend's basement, but here it works, and nicely, with subtle geometric patterns and block-print screens. The Mediterranean-inspired menu is served by a friendly and attentive staff. 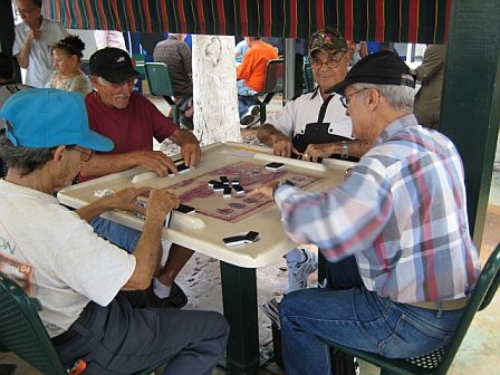 Anuja Madar
Bienvenidos a Miami
In Little Havana, old men play dominoes in the park, a cup of sweet, smooth Cuban coffee costs less than a dollar, and cigar shops showcase the skills of their expert rollers. No, this isn't Cuba, but Hispanic immigrants to Miami have set to create their home away from home, centering on the thoroughfare Calle Ocho. Spend an afternoon strolling the neighborhood, pausing at Maximo Gomez Park (801 SW 15th Ave.) to watch old-timers play dominoes and chess (if you're lucky, they'll invite you over for a closer look). If you're here in March, don't miss the Calle Ocho Festival, a massive block party with food, music, and entertainment.
advertisement 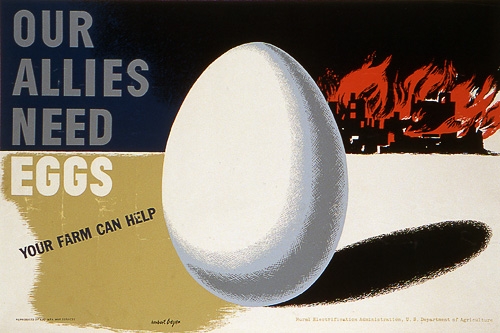 Wolfsonian-Florida International University
A Side of Culture, Please
There's more to South Beach than the beach, the bodies, and the bars. A block from Ocean Drive is the Wolfsonian-FIU (1001 Washington Ave., tel. 305/531-1001; www.wolfsonian.org), a small but interesting museum with a collection of more than 100,000 pieces that range from rare books to furniture. The permanent exhibits covering the world's fairs and expositions and political propaganda are worth a look, and design lovers will take interest in the halls of German and American Industrial design. The museum also hosts traveling exhibits; during my visit the museum was hosting an exhibit of artist-created wine labels from Rothschild. 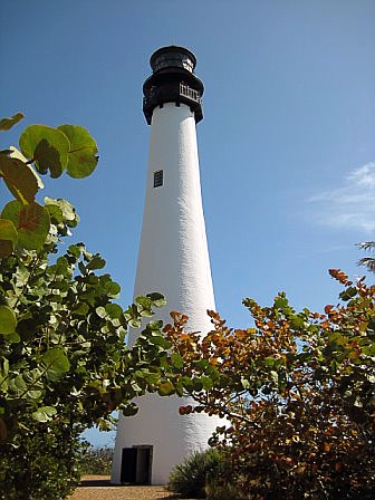 Anuja Madar
Bay Watch
South Beach isn't for everyone, so while glam has its appeal, sometimes you just want to enjoy the outdoors, plain and simple. Bill Bagg's Cape Florida State Recreation Area (1200 S. Crandon Park Blvd.; tel. 305/361-5811; www.keybiscaynechamber.org and www.floridastateparks.org/capeflorida), at the southern tip of Key Biscayne, offers active vacationers lush vegetation, walking and biking trails, and fishing in Biscayne Bay, while beach bums can still get all the sun and sand they desire. The park is also home to the Cape Florida Lighthouse, the oldest standing structure in Miami-Dade County, originally built in 1825 but repaired in 1846 after incurring damage during the Second Seminole War. Be sure to join Ranger Rob on the 100-step journey to the top of the lighthouse, where you'll get 360-degree views of the bay and some interesting facts (the lighthouse is lit by a 5-watt bulb). If you want to picnic on the beach, stop by Lighthouse Cafe (tel. 305/361-0067) for takeout sandwiches, but if you have the time, sit down for a meal at Boater's Grill (run by the same Cuban family; tel. 305/361-0080). The more upscale of the two (though still very casual), the grill faces a lively dock, where locals park their boats and giant lizards can be seen (if you look closely) rustling in the trees. Portions are large, so order dishes such as the shrimp asopado (shrimp in rice with Creole sauce), whole fried fish, and conch fritters with fries, and share. (Try the custard with warm rice pudding).
advertisement 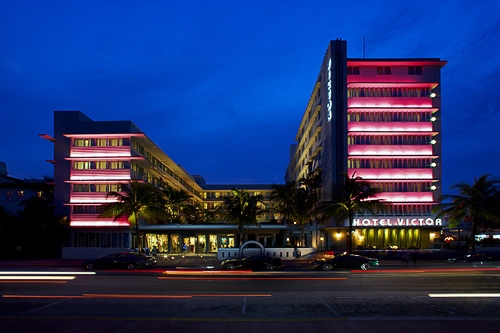 Hotel Victor
Beach-Front Property
The nonstop party on Ocean Drive continues at Hotel Victor (1144 Ocean Dr.; tel. 305/428-1234; www.hotelvictorsouthbeach.com), where a steel drum and a DJ draw in passersby to the hotel's front patio bar on the weekends, the sounds of which can be heard late into the evening (then again, who comes to South Beach to go to bed early?). Nautical gets a nod throughout the hotel, with curved ceilings in the corridors and port hole windows in the shower and toilet doors. Space in the regular rooms is a bit tight, particularly in the bathrooms, where counter space is very limited, but all rooms face the ocean and have balconies, so any bout with claustrophobia can be relieved by simply stepping outside. The lobby reflects the ocean at the hotel's doorstep, with a large jellyfish tank, brightly colored seating and flowing fabrics, and an original mural by Earl LePan, which was uncovered during the hotel's renovation. The pool, in the middle of the hotel, overlooks the ocean, and a full-service spa is on the same level. 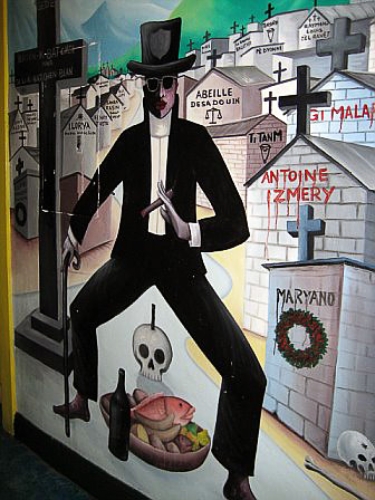 Anuja Madar
Goat, Anyone?
Go to Tap Tap Restaurant (819 5th St., tel. 305/672/2898) and order anything but the grilled goat or goat stew and a house mojito, and you'd be doing yourself a huge disservice. Named after the trucks that bounce along Haiti's roads (you'll see a colorful example out front), Tap Tap pays homage to Haitian culture and cuisine. Walls are covered in beautifully detailed murals, all by Haitian artists, that depict tales of Haitian tradition; be sure to ask if owner Gary Sanon-Jules will give you a quick tour of some of the larger works. The restaurant, a South Beach mainstay for 14 years, hosts live musicians every Thursday and Saturday night. In winter, Tap Tap goes all out for the Gede Festival, which Sanon-Jules calls a Haitian version of Day of the Dead.
advertisement 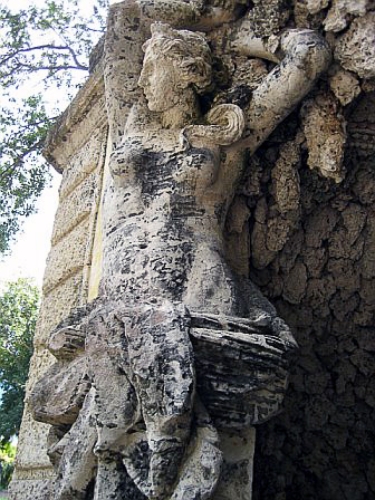 Anuja Madar
Not-So-Secret Garden
Every city has that place, the one where little girls dream of getting married. In Miami, we imagine that place to be the Vizcaya Museum and Gardens (3251 S. Miami Ave.; tel. 305/250-9133; www.vizcayamuseum.org). The two-story mansion was the winter home of James Deering, vice president of International Harvester, and modeled after the estates he had visited in Europe, where he also bought most of the mansion's furnishings and decorative pieces. Built between 1914 and 1916, Vizcaya also includes a sprawling garden, with pools, statues, grottos, a fountain, a maze, and more. The garden alone is worth the visit, as is witnessing young girls prepping for their quinceañeras with photo shoots and dress changes that make them appear much older than their almost 15 years. Don't miss the beautiful view from the back of the house, where it fronts Biscayne Bay. 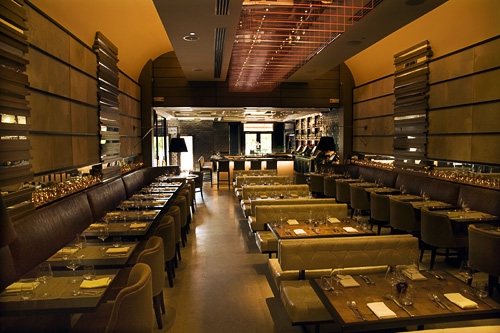 Lyall Aston
Steak Your Claim
If it weren't for the "restaurant" at the end of the name, you'd think Meat Market Restaurant (915 Lincoln Rd. tel. 305/532-0888; www.meatmarketmiami.com) was simply a description of the scene in South Beach. While tanned and trim bodies aren't on the menu, the cuts of meat are just as mouth-watering as those walking the streets. The space has the trappings of a typical steakhouse, but here you'll find they come across much sexier (perhaps that happens when you're in Miami): distressed wood is set off by cream couches and pony-hair walls, and a large Lucite light fixture bathes the room in its warmth. While meat is the foundation of the menu, the seafood dishes such as the tender sea bass or mahi-mahi are also worthy of praise. Start with the Kobe tartar or something from the raw bar, and be sure to utilize the sommelier's expertise.
advertisement 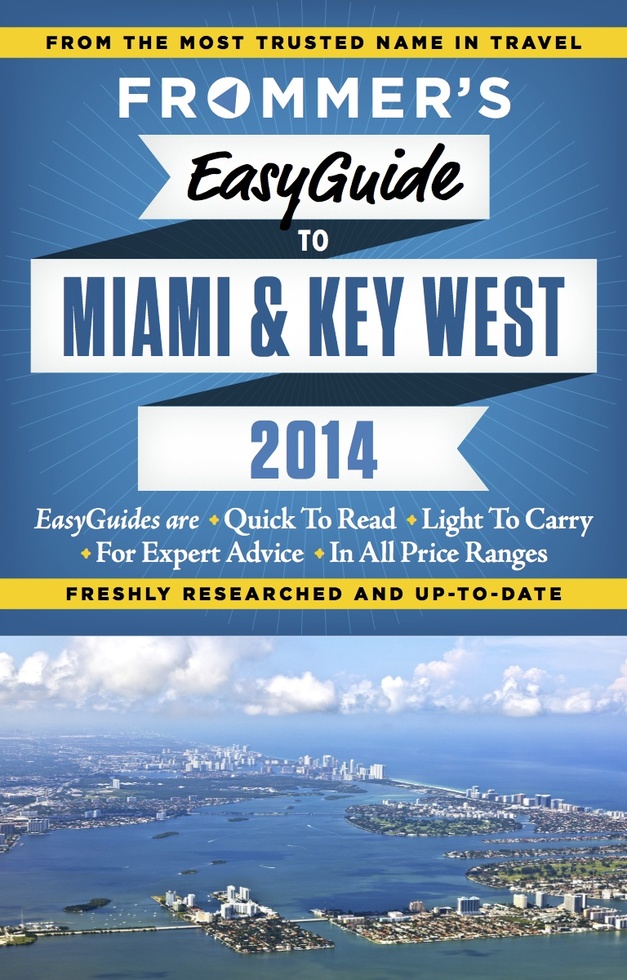