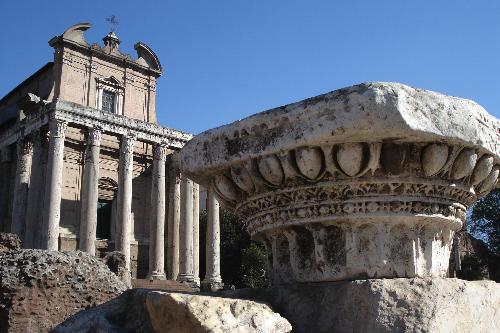 By Elizabeth Heath, Stephen Keeling and Donald Strachan
Walking Through Ancient Rome: A vast, almost unified archaeological park cuts through the center of Rome. For those who want specific guidance, we have a walking tour that will lead you through these haunting ruins. But it's fun to wander on your own and let yourself get lost on the very streets where Julius Caesar and Lucrezia Borgia once trod

A slice of history unfolds at every turn: an ancient fountain, a long-forgotten statue, a ruined temple dedicated to some long-faded cult. A narrow street suddenly opens to a view of a triumphal arch. The Roman Forum and the Palatine Hill are the highlights, but the glory of Rome is hardly confined to these dusty fields. If you wander long enough, you'll eventually emerge onto Piazza della Rotonda to stare in awe at one of Rome's most glorious sights, the Pantheon. 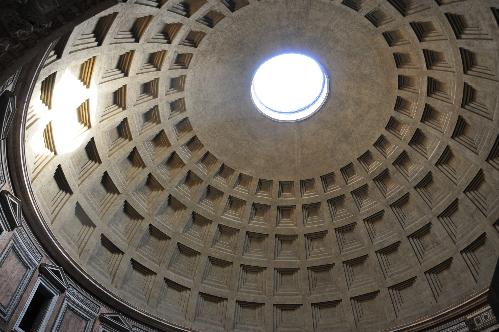 Jason Hu
Hanging Out at the Pantheon
The world's best-preserved ancient monument is now a hot spot -- especially at night. Find a cafe table out on the square and take in the action, which all but awaits a young Fellini to record it. The Pantheon has become a symbol of Rome itself, and we owe our thanks to Hadrian for leaving it to the world. When you tire of people-watching and cappuccino, you can go inside to inspect the tomb of Raphael, who was buried here in 1520. (His mistress, "La Fornarina," wasn't allowed to attend the services.)

Few things are more dramatic than being in the Pantheon during a rainstorm, watching the sheets of water splatter on the colorful marble floor. It enters through the oculus on top, which provides the only light for the interior. 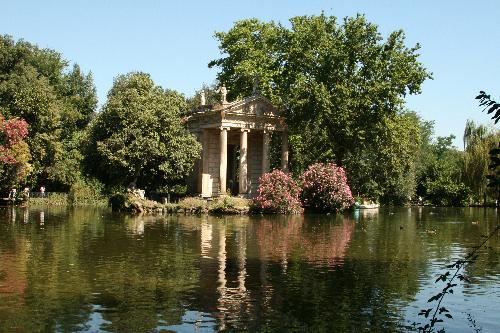 Ellen Gerstein
Taking a Sunday Bike Ride
Only a daredevil would try this on city streets on a weekday, but on a clear Sunday morning, while Romans are still asleep, you can rent a bike and discover Rome with your own two wheels. The Villa Borghese is the best place to bike. Its 6.5km (4-mile) borders contain a world unto itself, with museums and galleries, a riding school, an artificial lake, and a grassy amphitheater. Another choice place for Sunday biking is the Villa Doria Pamphili, an extensive park lying above the Janiculum. Laid out in the mid-1600s, this is Rome's largest park, with numerous fountains and some summer houses. 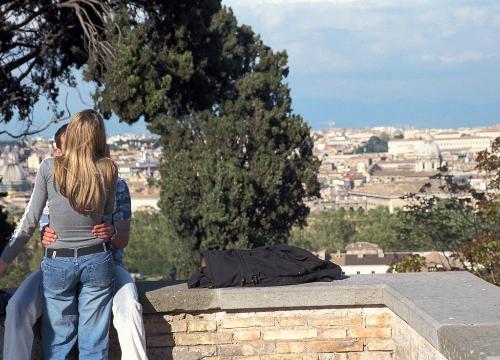 Hollenbeck Productions
Strolling at Sunset in the Pincio Gardens
Above the landmark Piazza del Popolo, this terraced and lushly planted hillside is the most romantic place for a twilight walk. A dusty orange-rose glow often colors the sky, giving an otherworldly aura to the park's umbrella pines and broad avenues. The ancient Romans turned this hill into gardens, but today's look came from the design of Giuseppe Valadier in the 1800s. Pause at the main piazza, Napoleone I, for a spectacular view of the city stretching from the Janiculum to Monte Mario. 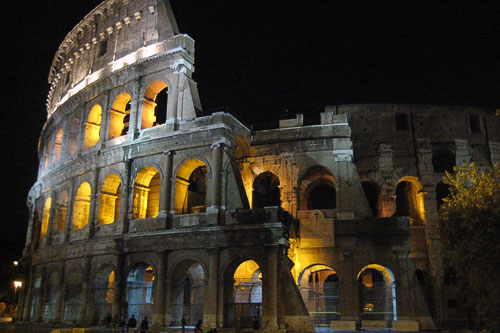 Fiona Wong
Enjoying Roma di Notte
At night, ancient monuments, such as the Forum, are bathed in a theatrical white light; it's thrilling to see the glow of the Colosseum with the moon rising behind its arches. Begin your evening with a Roman passeggiata (early evening stroll) along Via del Corso or Piazza Navona. There's plenty of action going on inside the clubs, too, from Via Veneto to Piazza Navona. Club kids flock to the colorful narrow streets of Trastevere, the area around the Pantheon, and the even more remote Testaccio. The jazz scene is especially good, and big names often pop in. An English-language publication available at newsstands, Wanted in Rome (www.wantedinrome.com), will keep you abreast of what's happening. 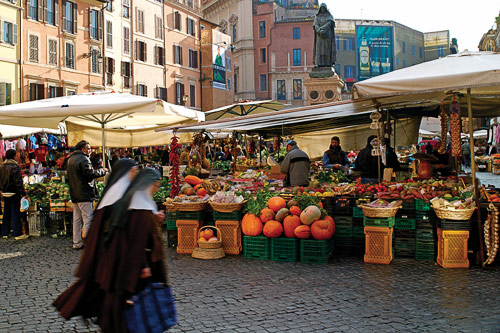 Clive Sawyer
Exploring Campo de' Fiori at Midmorning
In an incomparable setting of medieval houses, Campo de' Firori is the liveliest fruit and vegetable market in Rome, where peddlers offer their wares as they've done for centuries. The market is best visited after 9 a.m. any day but Sunday. Once the major site for the medieval inns of Rome (many of which were owned by Vanozza Catanei, the 15th-century courtesan and lover of Pope Alexander VI Borgia), this square maintains some of its old bohemian atmosphere. We often come here when we're in Rome for a unique, lively view of local life. Often you'll spot your favorite trattoria chef bargaining for the best and freshest produce, everything from fresh cherries to the perfect vine-ripened tomato. 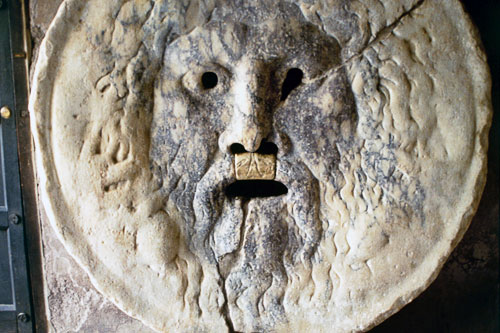 Jim Holmes
Strolling Along the Tiber
Without the Tiber River, there might have been no Rome at all. A key player in the city's history for millennia, the river flooded the capital every winter until it was tamed in 1870. The massive lungotevere embankments on both sides of the Tiber check the waters and make a perfect place for a memorable stroll. You can not only walk along the river from which Cleopatra made her grand entrance into Rome, but you'll also see the riverside life of Trastevere and the Jewish Ghetto. Start at Piazza della Bocca della Verità in the early evening; from there, you can go for some 3km (1¾ miles) or more. 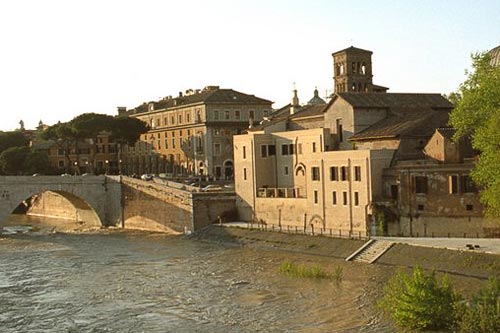 Hollenbeck Productions
Picnicking on Isola Tiberina
In ancient times, the boat-shaped island Isola Tiberina stood across from the port of Rome and from 293 B.C. was home to a temple dedicated to Aesculapius, the god of healing. A church was constructed in the 10th century on the ruins of this ancient temple. You can reach the island from the Jewish Ghetto by the Ponte Fabricio footbridge, which dates from 62 B.C. and is the Tiber's oldest original bridge. Romans come here to sunbathe, sitting along the river's banks, and to escape the traffic and the crowds. Arrive with the makings of a picnic, and the day is yours. 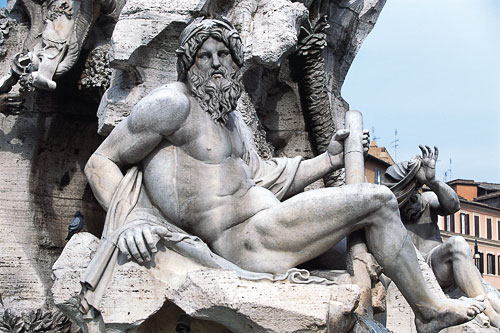 Simon McBride
Following in the Footsteps of Bernini
One of the most enjoyable ways to see Rome is to follow the trail of Giovanni Lorenzo Bernini (1598-1680), who left a greater mark on the city than even Michelangelo. Under the patronage of three different popes, Bernini "baroqued" Rome. Start at Largo di Santa Susanna, north of the Stazione Termini, at the Church of Santa Maria della Vittoria, which houses one of Bernini's most controversial sculptures, the Ecstasy of St. Teresa, from 1646. Walk from here along Via Barberini to Piazza Barberini, in the center of which stands Bernini's second most dramatic fountain, the Fontana del Tritone.

From the piazza, go along Via delle Quattro Fontane, bypassing (on your left) the Palazzo Barberini, designed by Bernini and others for Pope Urban VIII. At the famous crossroads of Rome, Le Quattro Fontane, take Via del Quirinale to see the facade of Sant'Andrea, one of the artist's greatest churches. Continue west, bypassing the Pantheon, to arrive eventually at Piazza Navona, which Bernini remodeled for Pope Innocent X. The central fountain, the Fontana dei Fiumi, is Bernini's masterpiece, although the figures representing the four rivers were sculpted by others following his plans. 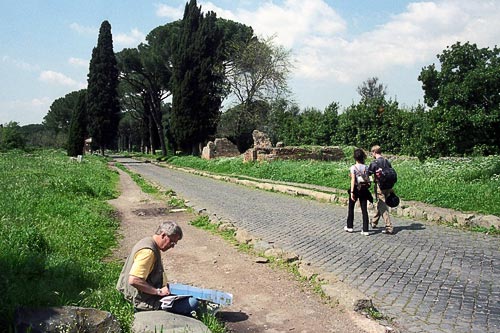 Hollenbeck Productions
Spending a Day on the Appian Way
Dating from 312 B.C., the Appian Way (Via Appia) once traversed the whole peninsula of Italy and was the road on which Roman legions marched to Brindisi and their conquests in the East. One of its darkest moments was the crucifixion in 71 B.C. of the rebellious slave army of Spartacus, whose bodies lined the road from Rome to Capua. Fashionable Romans were buried here, and early Christians dug catacombs in which to inter their dead.

Begin at the Tomb of Cecilia Metella and proceed up Via Appia Antica past a series of tombs and monuments (including a monument to Seneca, the great moralist who committed suicide on the orders of Nero; and another to Pope St. Urban, who reigned A.D. 222-230). The sights along Via Appia Antica are some of Rome's most fascinating. You can go all the way to the Church of Domine Quo Vadis. 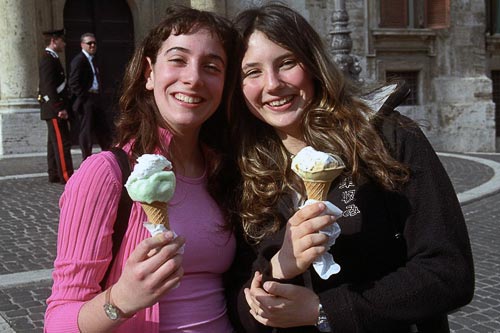 Georgios Makkas
Savoring Gelato on a Summer Afternoon
Having a gelato on a hot summer day is worth the wait through the long winter. Tubs of homemade ice cream await you in a dazzling array of flavors: everything from candied orange peels with chocolate to watermelon to rice. Gelaterie offer semifreddi concoctions (made with cream instead of milk) in such flavors as almond, marengo (a type of meringue), and zabaione (or zabaglione, eggnog). Seasonal fresh fruits are made into ice creams of blueberry, cherry, and peach. Granite (crushed ice) flavored with sweet fruit is another cool delight on a sultry night. Tre Scalini at Piazza Navona is the most fabled spot for enjoying divino tartufo, a chocolate concoction with a taste to match its name. 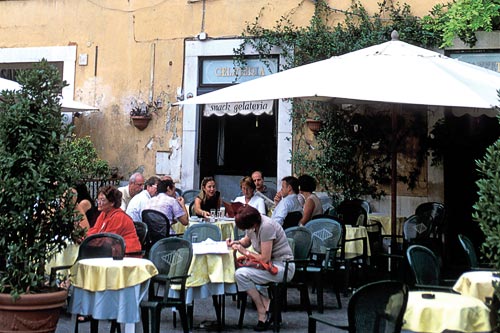 Simon McBride
Dining on a Hidden Piazza
If you're in Rome with that special someone, you'll appreciate the romance of discovering your own little neighborhood trattoria that opens onto some forgotten square deep in the heart of ancient Rome. And if your evening dinner extends for 3 or 4 hours, who's counting? The waiters won't rush you out the door even when you've overstayed your time at the table. 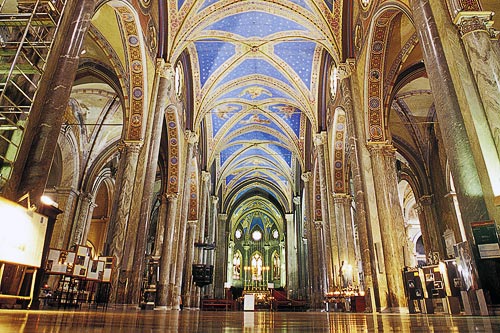 Clive Sawyer
Hearing Music in the Churches
Artists such as Plácido Domingo and Luciano Pavarotti have performed around Rome in halls ranging from churches to ancient ruins. Churches often host concerts, although by decree of Pope John Paul II, they must consist of sacred music. When church concerts are performed, programs appear not only outside the church but also on various announcements posted throughout Rome.

The top professionals play at the "big-name" churches, but don't overlook those smaller, hard-to-find churches on hidden squares. Some of the best music we've ever heard has been by up-and-coming musicians getting their start in these little-known churches. The biggest event is the RAI (national broadcasting company) concert on December 5 at St. Peter's -- even the pope attends. Other favorite locations for church music include Sant'Ignazio di Loyola, on Piazza di Sant'Ignazio, and San Paolo Fuori le Mura, at Via Ostiense 186. 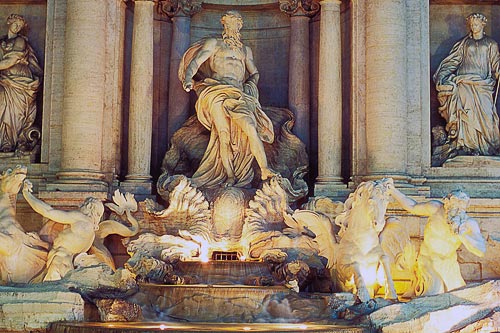 Simon McBride
Walking from Fountain to Fountain
On summer nights you'll find Romans -- especially those who live in crowded apartments without air-conditioning -- out walking from fountain to cooling fountain. Every visitor makes at least one trip to Bernini's fountain on Piazza Navona, after stopping off at the Trevi Fountain to toss in a coin (thus ensuring their return to Rome), but there are hundreds more.

One hidden gem is the Fontana delle Tartarughe, in tiny Piazza Mattei. It has stood there since 1581, a jewel of Renaissance sculpture showing youths helping tortoises into a basin. Our favorite Bernini fountain is at Piazza Barberini; his Fontana del Tritone is a magnificent work of art from 1642 showing the sea god blowing through a shell. Unfortunately, it's now against the law to jump into these fountains and paddle around as Anita Ekberg did in La Dolce Vita.
Arts and Culture
Honeymoons
Local Experiences
News
Outdoor & Adventure
Student