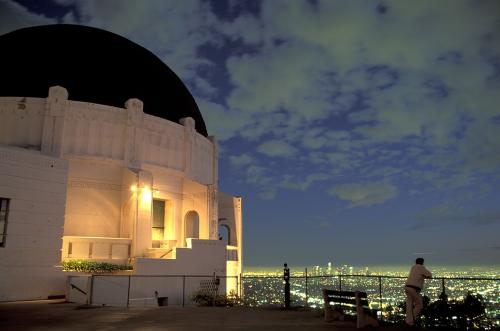 By Frommer's Staff
The allure of Los Angeles -- for better or for worse -- is undeniable. Angelenos know their city will never have the sophisticated style of Paris or the historical riches of London, but they cheerfully lay claim to living in the most entertaining city in the United States, if not the world. It really is warm and sunny most days of the year, movie stars actually do live and dine among the commoners, and you can't swing a cellphone without hitting a rollerblading blonde at the beach.

This part of the L.A. mystique -- however exaggerated it may be -- truly does exist, and it's not hard to find. In fact, it's fitting that L.A. is home to the world's first amusement park because it regularly feels like one, as the line between fantasy and reality is often obscured. From the anachronistic glamour of Beverly Hills to the vibrant street energy of the Venice Boardwalk, each of the city's diverse neighborhoods is like a mini-theme park, offering its own kind of unique adventure. Drive down Sunset Boulevard and you'll see: The billboards are racier, the fashions trendier, the cars fancier, the bodies sexier, the sun brighter, and the energy higher than any place you've ever been. Darlin', you ain't in Kansas anymore -- you're in La-La Land. Let's go play. 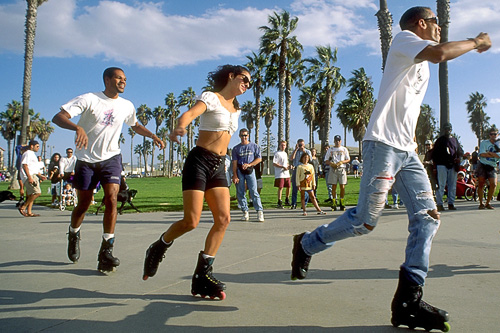 Larry Brownstein/Ambient Images
Visiting Venice Beach's Ocean Front Walk
You haven't visited L.A. properly until you've rented some skates in Venice and embarrassed yourself in front of thousands while taking in the human carnival around you. Nosh on a Jody Maroni's "haute dog," buy some knockoff sunglasses, and realize how pathetically out of shape you are compared to all the tan and trim locals -- all while enjoying the wide beach, blue sea, and assorted performers along the boardwalk. Can't skate? Cowards can rent a bicycle and pedal along the bike path. 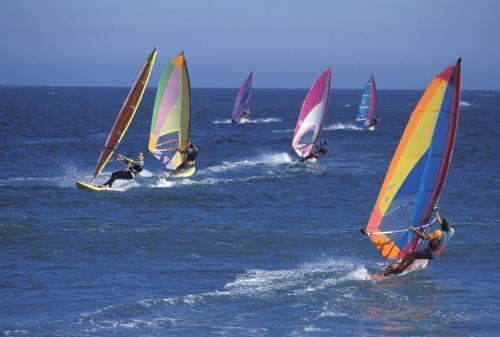 Larry Brownstein/Ambient Images
Basking at the Beach
This is, after all, L.A. -- so get thy buttocks to a beach. Watch a volleyball tournament at Hermosa Beach, take surf lessons at Manhattan Beach, or gawk at the world's vainest weight lifters pumping iron at Venice Beach. Surfers are always spotted at the Malibu beaches, and local families prefer to pitch their umbrellas at Zuma Beach. 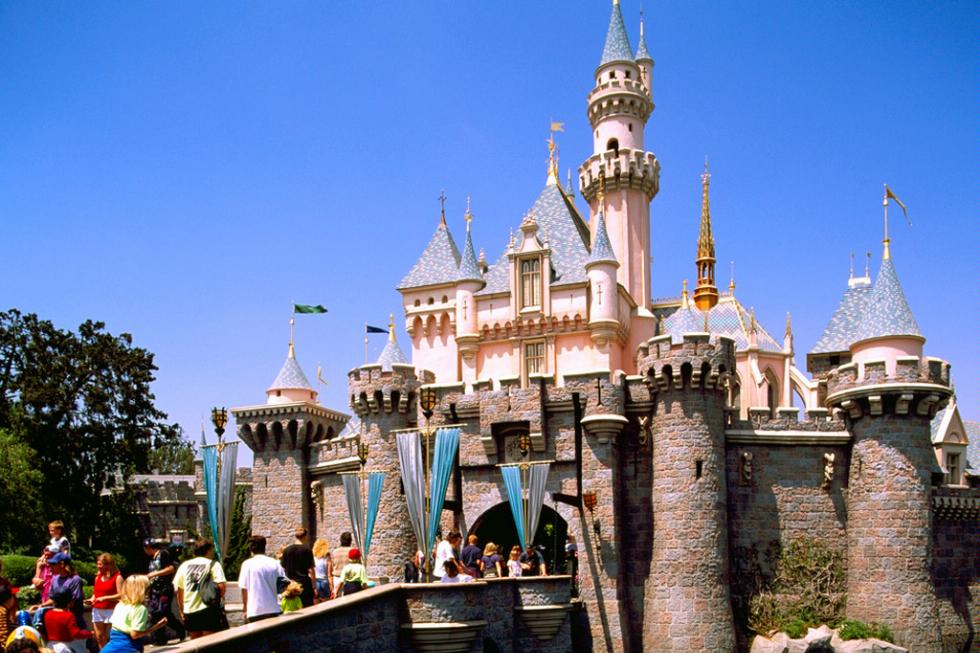 Gunter Marx/Alamy
Visiting Disneyland, the "Happiest Place on Earth"
The resort's worldwide appeal is evident in the virtual United Nations of revelers traipsing through Adventureland, Fantasyland, Tomorrowland, and Disney's California Adventure park. It won't be long before the song "It's a Small World" seems permanently stuck in your head. 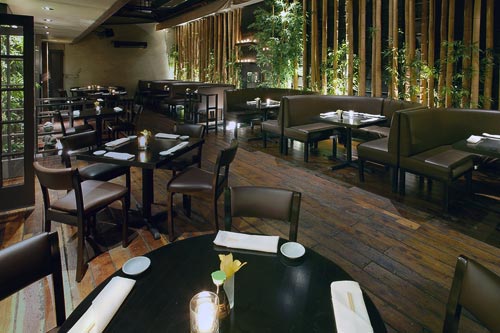 Courtesy of Koi Los Angeles
Eating Out and Checking Out
Dining at Spago (or the Ivy or the Palm): Dining at one of L.A.'s über-trendy A-list celebrity haunts is an experience to be filed under "Only in L.A." Hear dialogue straight out of Entourage while eating fine food prepared for the world's pickiest eaters ("I can't eat that! Take it away."). 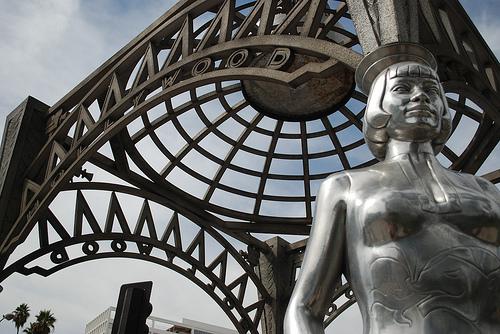 Coleen Barr
Cruising Sunset Boulevard
It's a must for first-time visitors because you'll see a cross section of everything that is L.A.: legendary clubs, studios, and hotels that you'll instantly recognize from the silver screen and TV shows. The journey ends with a trip to Malibu's fabled beaches, where those classy Baywatch episodes were filmed (how perfect). 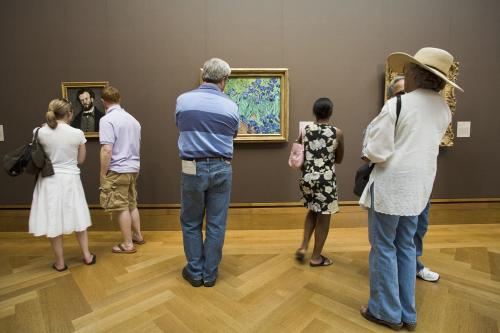 Larry Brownstein/Ambient Images
Touring the Getty Center
See the result of unlimited funds and very expensive tastes at this multifaceted cultural center looming large over the city's western edge. The ultramodern facility, more airy and inviting than it looks from below, features a museum housing the impressive art collection of deep-pocketed industrialist J. Paul Getty, a postmodern garden, and breathtaking views of L.A. A sleekly high-tech funicular whisks you from freeway level to this virtual city in the clouds. 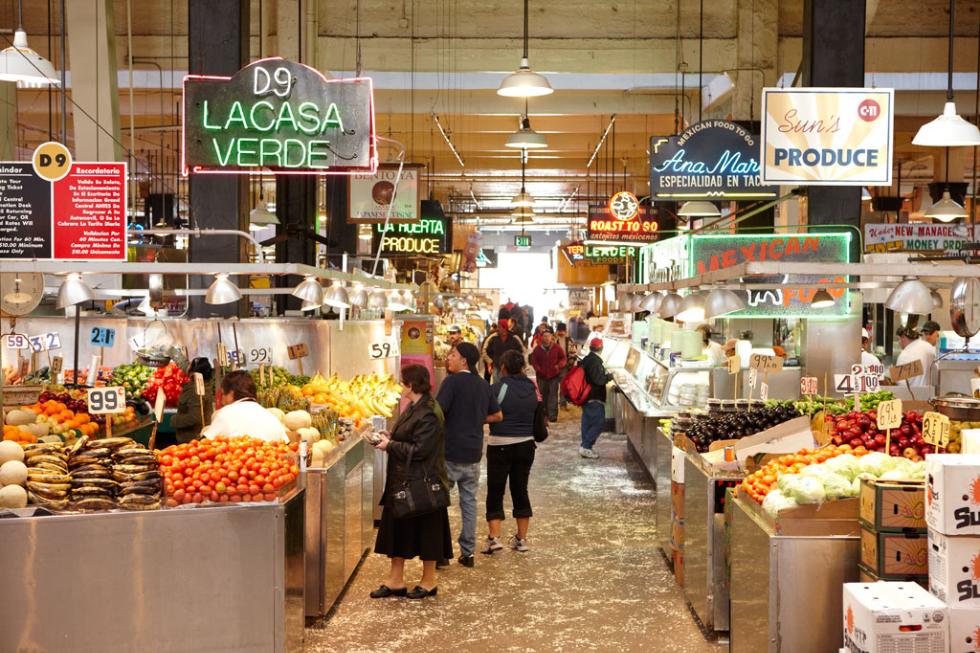 Ian White
Spending a Day Downtown
If you're looking for a healthy dose of ethnic culture, you'll find it in Downtown L.A. Take a self-guided tour of the mind-blowing Walt Disney Concert Hall or cutting-edge Museum of Contemporary Art, stop in for a snack at the bustling Grand Central Market, pick up some inexpensive Mexican handicrafts along colorful and historic Olvera Street, and have dim sum in Chinatown. 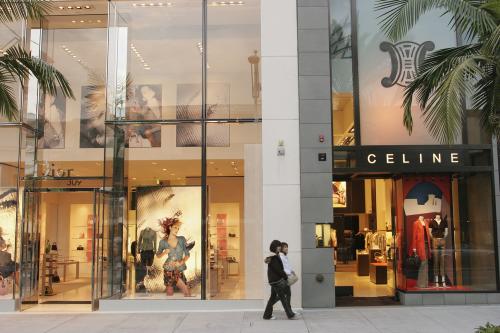 Jeff Greenberg/AGE Fotostock
Power Shopping?
You'll see "I'd Rather Be Shopping at Nordstrom" license-plate frames on Lexuses all over L.A., evidence that spending money is a major pastime here. Whether it's $5 vintage bowling shirts, $10,000 Beverly Hills baubles, or anything in between, you're sure to find it in L.A.'s cornucopia of consumerism. My favorite shopping zones are the eclectic shops along Abbot Kinney Boulevard, the endless ethnic oddities at the Grand Central Market in Downtown L.A., and the ultratrendy stores such as GR2 and Giant Robot along Sawtelle Boulevard in Japantown. 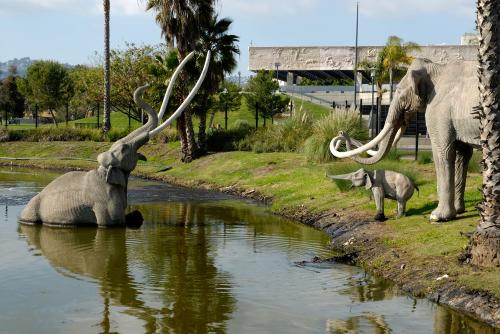 Martin Shields/Alamy
Strolling Wilshire Boulevard's Museum Row
Natural history meets pop culture meets modern art along Museum Row. La Brea Tar Pits, Petersen Automotive Museum, Craft & Folk Art Museum, and Los Angeles County Museum of Art are all shoulder-to-shoulder in the heart of L.A. The only problem is that it's too much to see in a single day. 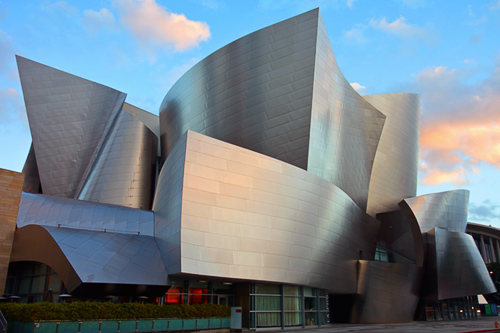 Anthony Arendt/Ambient Images
Taking a Tour of the Walt Disney Concert Hall
Built with a lot of Disney money but without a trace of goofiness, this stunning accomplishment of art and architecture is the crown jewel of Downtown. You'd have to fly to Spain to see architect Frank Gehry's similar architectural masterpiece, the Guggenheim Bilbao. The dramatically curvaceous stainless-steel exterior houses one of the most acoustically perfect concert halls in the world. The self-guided audio walking tour, narrated by actor John Lithgow, is superb. 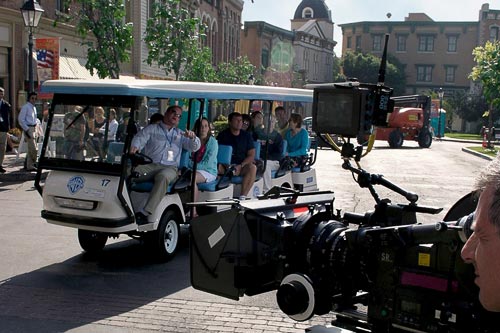 Courtesy of Warner Bros. Entertainment
Taking a Studio Tour
This is why you're vacationing in L.A. -- to see where movie magic is being made. Studio tours are an entertaining opportunity to get a peek at the stage sets for sitcom and talk shows (sometimes during filming), and you never know who you're going to see emerging from his or her Star Wagon. 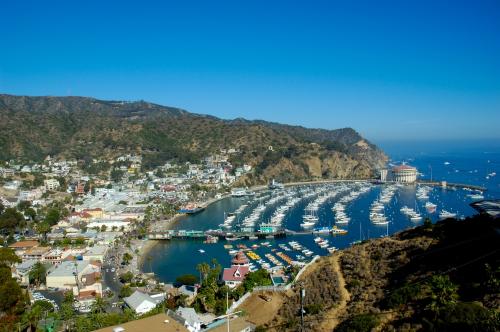