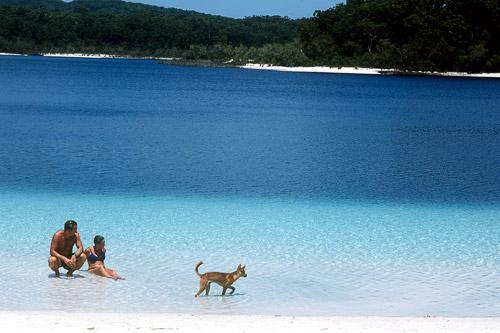 By
Outdoor Vacations for Every Traveler
By Charis Atlas Heelan

Australia is ideal for adventurers, but fortunately you don't have to be a real athlete to enjoy any of these outdoor vacations. From steering cattle on horseback to four-wheel-driving on a beach, these iconic places offer varying levels of outdoor activities. And if kayaking, snorkeling, and swimming are more your style, you can always look forward to mellowing out at one of these affordable hotels. 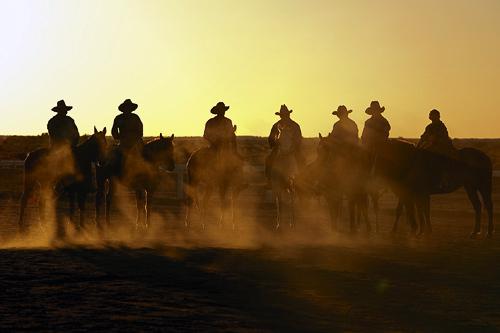 Why: This is an opportunity to bring out your inner cowboy and experience the true spirit of rural Australia on a five-day muster along one of Australia's most evocative stock trails, the Oodnadatta Track. You'll pass through rugged landscapes on horseback and camp at Anna Creek Station, said to be the world's largest cattle station.

Where: Anna Creek Station is 5.5 million acres, about the size of Belgium. It is about 450 miles from Alice Springs in Central Australia.

How: From the South Australian capital city of Adelaide, take the Drover's Express bus service to Anna Creek Station with an overnight stop in the opal mining town of Coober Pedy.

Price: This once-in-a-lifetime experience costs A$3,200 per person. Add A$795 for round-trip domestic transfers from Adelaide on the Drover's Express.

Who: This droving journey would appeal to anyone with a sense of adventure who doesn't mind getting down and dirty. Horse-riding experience is not necessary. 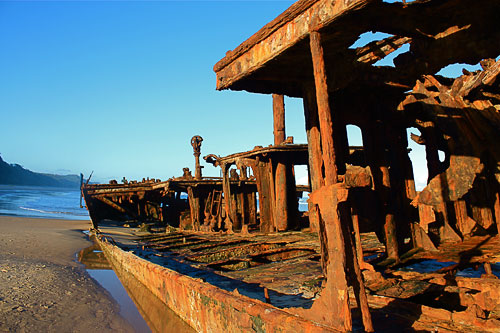 Why: The stunning 75-Mile Beach, more than 100 crystal clear freshwater lakes, rain forests, fishing, Australian wildlife (350-plus bird species, kangaroos, wallabies, flying foxes, and Australia's purest breed of dingoes), whale- and dolphin-watching, and being able to drive along stretches of pristine beaches. Don't miss the multi-colored sand cliffs of The Cathedrals, Rainbow Gorge, the Maheno shipwreck, and the bubbling sea water of the Champagne Pools. You can camp or stay at one of the handful of beach resorts on the island.

Where: Fraser Island is off the coast of River Heads (Hervey Bay) in Queensland, about a four-hour drive north of Brisbane.

How: There are nonstop flights from Brisbane or Sydney to Hervey Bay (Qantas Link and Virgin Blue), or you can drive or take a bus (Greyhound). From there (River Heads, a little south of Hervey Bay) it is a short ferry ride across to the island. Note that only four-wheel drive vehicles are allowed on the island.

How Much: A barge ferry from Hervey Bay is A$50 for a walk-on passenger, or A$150 for a vehicle with three passengers; a four-wheel-drive vehicle permit for access to the island is A$38.25. A two-night stay at in a motel room at Eurong Beach Resort right on 75-Mile Beach, with round-trip barge transfers, breakfast daily, and dinner each night is A$249 per person based on double occupancy. A two-bedroom apartment at Sailfish ranges from A$200 to A$260 per night.

Who: For independent adventure seekers after an authentic beach experience. 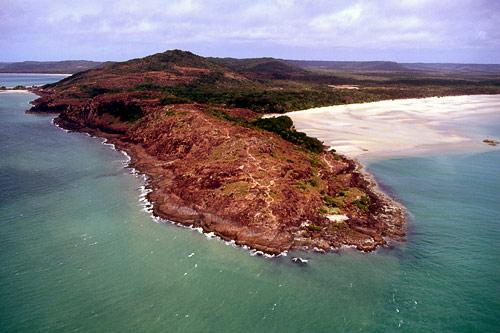 Why: If you're looking for sheer beauty in an untouched environment, Cape York is your destination. Experience secluded beaches, drive along the historic Overland Telegraph Track (OTT), interact with indigenous Aboriginal tribes, swim in your own watering hole at the foot of waterfalls, fish for Barramundi, take a ferry to Thursday Island in the Torres Strait, visit Lakefield National Park, or marvel at the remoteness of The Tip -- the northernmost point of Australia.

Where: The mining town of Weipa is a good base for travel in this area. Albatross Bay Resort is on Duyfken Cresent in Weipa.

How: You can get to Weipa flying Qantas. Alternatively, if time isn't an issue, buses operate once a week between Cairns and Weipa from April to October. The distance from Cairns is 500 miles.

How Much: A flight from Sydney to Weipa starts at A$256 one way. Stay in a hotel room at Albatross for A$165 per night for up to three guests, or a more basic cabin for A$120 per night for two guests. A one-hour ferry ride from the town of Seisia to Thursday Island in the Torres Strait is A$55 round-trip. 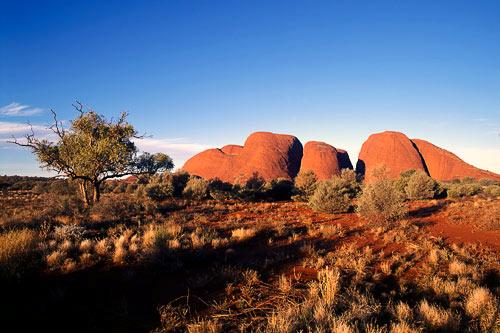 Nick Rains
The Red Centre
What: The Red Centre refers to the area of Central Australia that lies on the southern end of the Northern Territory.

Why: Although you may have heard of Ayers Rock (Uluru), the massive color-changing monolith and icon of the Australian outback is just one of the Centre's incredible natural phenomena. Don't miss Uluru-Kata Tjuta National Park, Kings Canyon with the tropical pools of the Garden of Eden, Aboriginal art along the Tanami Track, the gorges of Watarrka National Park, and the MacDonnell Ranges. Swim in watering holes, experience the best of Australia's native wildlife, take a camel trek through the Simpson Desert, and explore Aboriginal culture with its people.

When: The coolest months are June and July with temperatures in the mid- to high-60s; from November to March, temperatures soar into the high 90s and beyond.

How: There are regular flights to Alice Springs from several major Australian cities on both Qantas and Tiger Airways. Qantas also flies directly to Ayers Rock. Alternatively, you can travel in style on the legendary Ghan train from either Adelaide or Darwin (count on a 25-hour trip).

Who: Visiting the Red Centre is a must for anyone who wants to discover the heart and soul of this ancient land.

How Much: A one-way trip on the Ghan from Adelaide starts from A$358 for a seat only and A$656 for a sleeper cabin. A round-trip Qantas flight from Sydney to Alice Springs currently starts at A$450; there are regular seasonal airfare sales and specials. A night at http://www.frommers.com/destinations/kingscanyon/H37555.html Kings Canyon Resort for two people ranges from A$115 to A$300 depending on the room type. 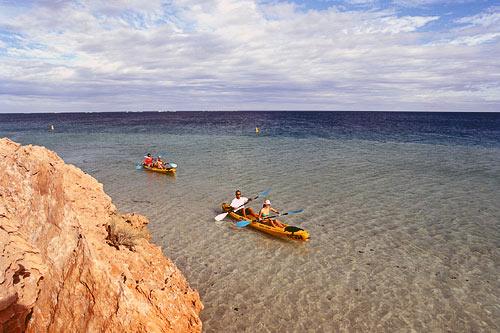 Anson Smart
Ningaloo Marine Park, Western Australia
What: Ningaloo Reef, one of the longest fringing barrier reefs in the world.

Why: Because the Great Barrier Reef is so well-known, it also attracts the most visitors. Ningaloo is a bit of a well-kept secret with fewer visitors, more than 200 species of coral, close to 500 species of fish, plus whale sharks, whales, dolphins, manta rays, turtles, and dugong (similar to manatees). This reef also features the deserted beaches of the Muiron Islands, sensational surf breaks -- and at its closest point, Ningaloo Reef is within 100 yards of shore so you can just step off the beach.

Where: Ningaloo covers almost 1,000 square miles along a 200-mile stretch of coastline off the mid-north coast of Western Australia. Exmouth is the largest town in the area and from Perth, expect a 15-hour drive along the coast (about 775 miles). Alternatively, you can stay in the idyllic seaside town of Coral Bay, right on the edge of the marine park.

When: The climate here is gorgeous throughout the year, although it can get incredibly hot from December through March. Whale sharks visit in huge numbers between April and June; there is mass coral spawning in March and April; humpback whales are prevalent between June and November; and you can see rare turtle species hatching in January and February.

How: You can drive, or catch a flight on SkyWest from Perth.

Who: Although everyone would enjoy the beauty here, scuba diving and snorkeling enthusiasts will think they have found marine heaven in the warm waters of the Indian Ocean. Surfers will also love it.

How Much: A one-way flight from Perth on SkyWest starts from A$162. Basic but comfortable rooms at Ningaloo Lodge in Exmouth are priced at A$125 per night. A unit at Ningaloo Reef Resort in Coral Bay is A$191 per night and an ocean-view apartment is A$253.