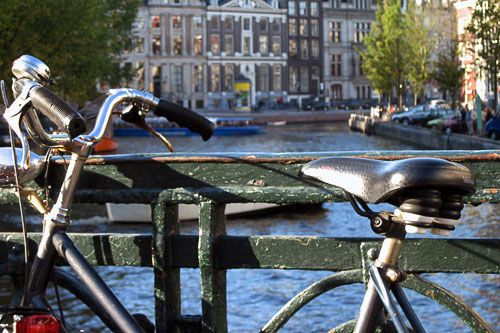 By Rhonda Carrier
Cities and cycling are two words that don't often sit comfortably together. But with the future of our planet at stake, there's been a big drive to make Europe's cities more bicycle-friendly, both for residents and visitors. Many cities now have bike-share schemes, usually free for the first half hour or so, that make it easy to hop between the sights quickly and easily -- additions to those listed below are Dublin, Brussels, Vienna, and Seville.

Photo Caption: A bike sits on a bridge overlooking the Amsterdam canals. 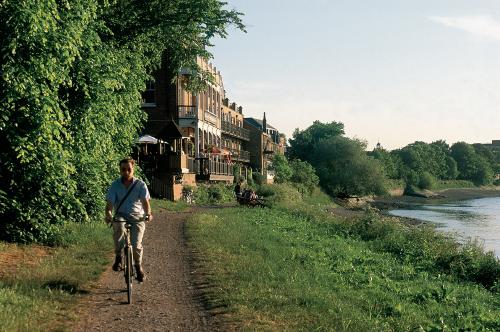 Gregory Wrona
London
The British capital has long been a terrible city for cyclists, with a dearth of cycle lanes alongside its traffic-choked streets and very little cycling permitted in the royal parks or other green spaces. That's changed with London's municipal bike-loan scheme, whereby you can pick up a bike from 40 docking stations in and around the city centre, with the first 30 minutes' riding free.

Take a bike ride to the London Transport Museum or visit the Camden Green Fair and Bikefest, the first Sunday in June, held in Regent's Park and offering visitors the chance to try out a new type of bike or get their own serviced for free.

Otherwise, head to either Battersea Park or Dulwich Park, both south of the river, where the firm London Recumbents offers hire of all manner of pedal-based vehicles to take out on their flat pathways, including low-slung horizontal bikes for adults or kids and family tandems, from one hour to a week or even longer.

Among London hotels offering bike loan/hire are the Baglioni London, part of a stylish Italian chain offering complimentary use of its adult and children's cycles as part of its Family Package. Or if you prefer to sign up to a guided bicycle tour of the sights, Fat Bike Tours comes highly rated.

Photo Caption: Cyclist on the tow path by the River Thames in Barnes, London. Ye White Hart pub is in the background. 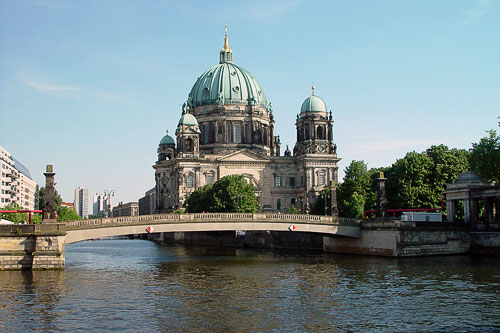 Anne Ackermann
Berlin
Berlin is a great place to discover by bike -- there are few steep hills and lots of bike paths/lanes or Radewege. Berlin is one of six German cities offering the Call-a-Bike scheme run by the National Railway, Deutsche Bahn. With the aid of a mobile phone, you call the number given on the bike to get a 4-digit opening code.

To devise your own bike routes between the city's sites, see the BBBike online route-planner. For guided bike tours of the city, including a Berlin Wall Tour, East Unplugged, and Nightseeing Tour, contact Berlin on Bike.

Photo Caption: View of an arched bridge and The Berliner Dom over the East Berlin canal. 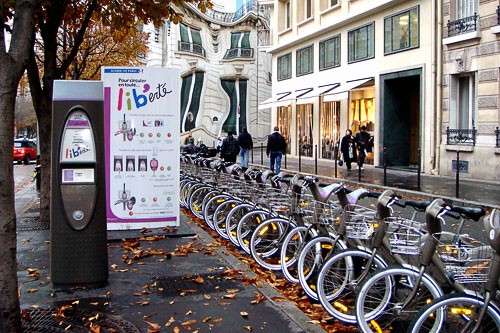 Frommers.com Community
Paris
Like London, the Paris isn't inherently bicycle friendly, but the Vélib public bike-loan/hire scheme introduced in 2007 has been so successful, it's grown to become the biggest system of its kind in the world, with about 20,000 bicyles and more than 1,600 docking stations (an average of one every 300 metres). You need to purchase a daily, weekly or annual subscription to use these bikes and to change bikes every 30 minutes unless you're to incur a charge on a rising scale.

The French use the bikes to get around the city on their daily business but they're handy for those looking to get between Paris's sights. For something a little more freewheeling, the vast wooded park of the Bois de Boulogne on the west side of the city has good cycling paths amidst its small lakes, ponds and streams. 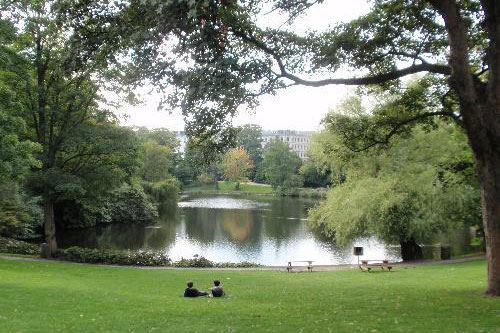 Jon Stroud
Copenhagen
The Danish capital has run the Bycyklen Kobenhavn non-profit bike-loan scheme since 1995, allowing visitors to can borrow a bike for as long as they like (except after nightfall -- they have no lights). Bikes are the best way to see the city -- nearly half of the city's inhabitants use their bikes daily, and there are plenty of bike lanes.

The best place for bike-rental (including family bikes with front trailers) in Copenhagen is CPH, where profits go to sending used bicycles to African villages to be converted into ambulance-bikes, water-carrying bikes and bikes to get kids to school. The firm also runs bike tours. 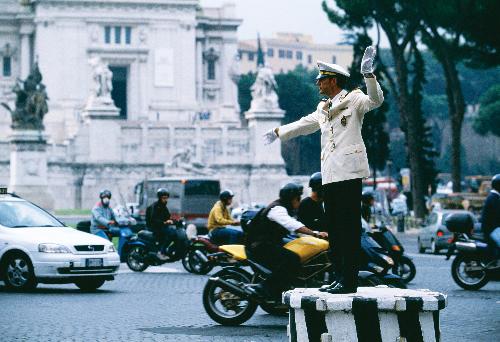 Simon McBride
Rome
With Italian drivers renowned for their hotheadness, cycling in Rome may sound like a suicide mission. However, the drivers are in fact very tolerant of cyclists, and there are 10 official bike-paths and good itineraries that make biking a joy here. You might, for instance, head out along the partly cobblestoned Appian Way, the antique route that used to link Rome with much of the rest of Italy, dotted with archaeological remains. Alternatively, take a guided tour, with itineraries including Panoramic Rome and the Ancient Parks and all kind of bikes available, including children's bikes and tandems. Operators include TopBikes Rental & Tours.

Rome also has brand-new bike-sharing scheme, Atac, which costs €0.50 per half hour of riding. 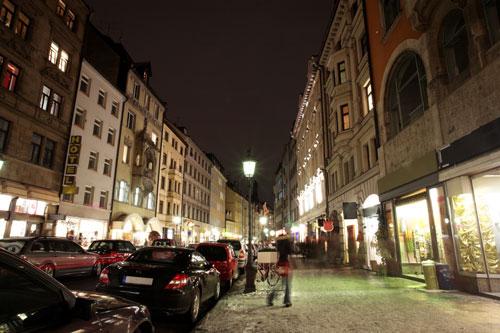 Norihiro Haruta
Munich
Munich is also a wonderful city to explore by pedal-power, with around 125 miles of bike paths and lanes, including some along the Isar river and through the parks. You can hire bikes and furnish yourself with maps either at the main train station, or again, using the Call-a-Bike scheme. Among good guided options are Lenny's Bike Tours (www.discovermunich.net) and Mike's Bike Tours (www.mikesbiketours.com/1.html).

The other four German cities offering Call-a-Bike are Frankfurt, Cologne, Stuttgart, and Karlsruhe. 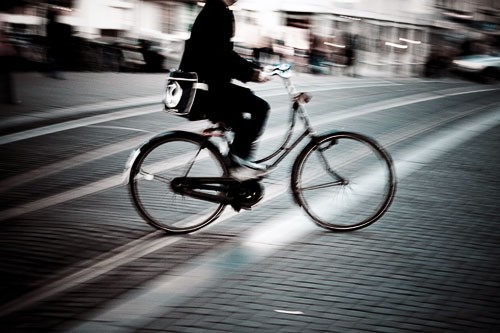 Frommers.com Community
Amsterdam
The classic place to cycle in Europe, the Amsterdam scarcely needs any introduction -- everyone cycles here, there are bike lanes all over the city, and bicycles are by far the easiest way of getting around (although there's an excellent tram system too). You can simply amble alongside the city's sparkling canals, use your bikes to get between the sights, or head for a green space such as the lovely Vondelpark. 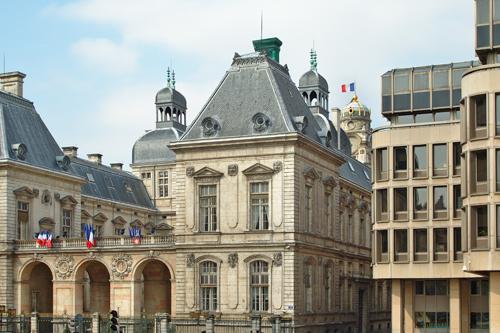 Anne Ackermann
Lyon and La Rochelle
Another good French city for cycling fans is Lyon in the Rhône-Alpes, where Vélo'v was the pioneering scheme, introduced in 2005, that led to the Parisian bicycle network. The city is also introducing a bike-taxis scheme, Cyclopolitain (link opens PDF document), to take visitors around the Old Town and on certain other routes.

However, it's the seaside town of La Rochelle on the Atlantic coast that merits the title of top cycling city in France, having introduced its Yélo hire/loan scheme as far back as 1974. Longer hire in the area means you can take advantage of about 60 miles of cycle tracks on the idyllic Ile de Ré, an island linked to La Rochelle by a 2-mile bridge. 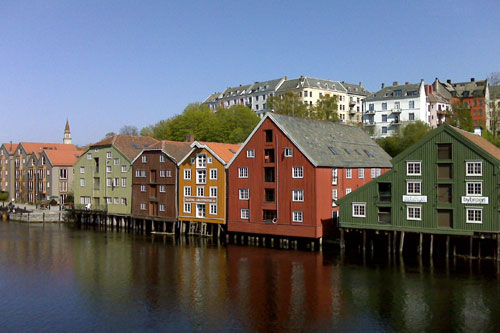 Jenni Davidson
Trondheim
Trondheim, Norway's third-largest city is so cycle-friendly, it has a bike-related tourist site in its own right in the form of the Trampe, the world's first bicycle lift. Built in 1993 in a city in which the vast majority of the 30,000 student residents use their bikes and inspired by ski-lifts, it has helped more than 220,000 cyclists ascend the very steep Bbrubakken hill in the historical center. Though not well known on the tourist trail, pretty, leafy Trondheim has a spectacular Gothic cathedral and picturesque harbourside wharves and old wooden mansions to discover, plus a lively nightlife. The city has a bike-sharing scheme, Citybike available from stands using a coin, and dedicated bike lanes on streets.