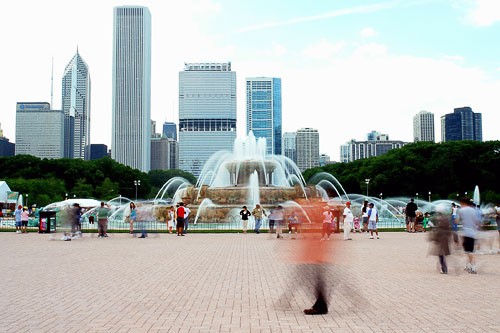 The Loop has been an exciting place to view public art for over a century; admire a colorful mosaic by Marc Chagall or the towering work of Picasso. The other works of art featured on this tour include Joan Miró's abstract sculpture Miss Chicago across the street from the Picasso and the very lifelike bronze lions that guard the Impressionist masterpieces of the Art Institute of Chicago.

The history of public art in the Loop goes back to the late 19th century when the Art Institute of Chicago began to offer up a number of works in public spaces for the enjoyment and edification of the general public. The works tended to be quite traditional in their subject matter (great men, great explorers, city founders and so on) for many decades. After a quiet period on the art front, new public art installations began popping up in the late 1960s and early 1970s, in places such as Daley Plaza and the new federal building complex along Dearborn Street.

A boost to these public art programs continued with the creation of the city's Percent-for-Art Ordinance in 1978. The ordinance dictated that a percentage of the cost of construction and renovation of municipal buildings must be set aside for the acquisition of artworks for these buildings. Here's a nine-step tour of the hightlights. 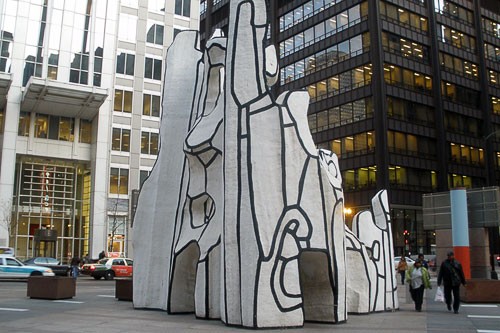 French artist and sculptor Jean Dubuffet created this rather striking piece of public art shortly before he died in 1985. The 29ft (9m) high fibreglass work is titled Monument with Standing Beast and it features four elements that are meant to suggest a standing animal, a portal, a tree and an abstract architectural form. It's hard to miss the rather large spaceship-like building that provides a dramatic backdrop for the work: it happens to be the James R. Thompson Center, designed by Helmut Jahn (born 1940). 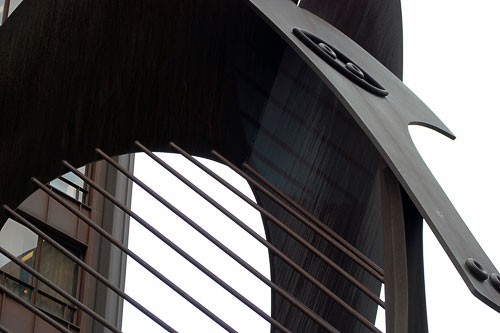 This 50ft (15m) high sculpture by Pablo Picasso was placed in Daley Plaza in 1967 and it's been a source of controversy and enjoyment for over four decades. Prior to that, there hadn't been much new public art placed in the city's Loop for decades, and this work represented a radical break with the more traditional heroic-style sculptures that were par for the public art course before then. Emissaries from the city visited Picasso and gave him a few items related to the city's history such as old postcards and books, and he set himself to the task of creating a new work. The final piece was assembled in the United States Steel factory in Gary, Indiana, and made its way to the Loop. Picasso never said explicitly what the work was meant to resemble, though it did upset a number of more traditional folks with its abstract qualities. One city politician even suggested that the work be replaced with a statue of a famous baseball player. 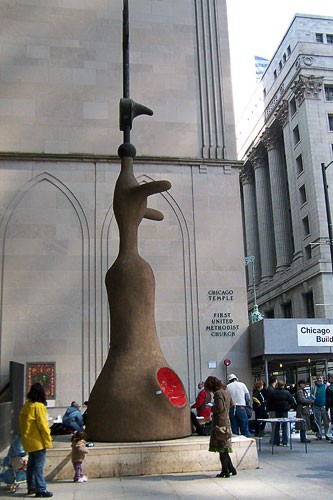 Joan Miró was particularly fond of Chicago, hence he donated the design of this unusual sculpture to the city. The various forms in this 39ft (12m) high work reference an earth deity, a star and rays of light. Constructed of steel, wire mesh, concrete, bronze and ceramic tile, the sculpture was installed on this site in 1981. 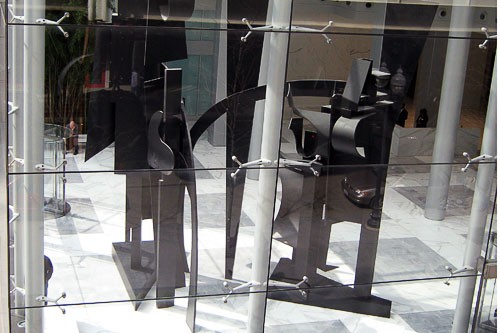 Born in Kiev, Russia, Louise Nevelson was known for her creative assemblages that frequently brought together a variety of forms. This sculpture entitled Dawn Shadows was inspired by the nearby elevated train and is constructed of steel, painted in her signature colour, matte black. It's good to walk all around this sculpture to appreciate it fully, and one of the best vantage points happens to be the elevated train station across the street. 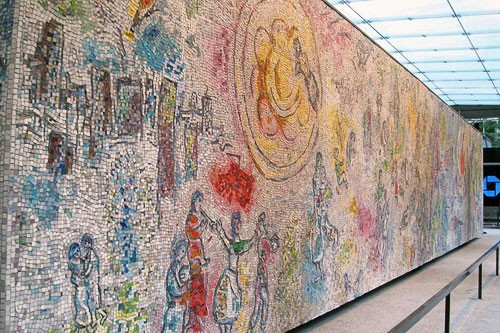 Marc Chagall was a master of many media, and this 70ft (21m) long, 14ft (4m) high, 10ft (3m) wide rectangular box features his masterful mosaic Four Seasons. The mosaic is comprised of thousands of inlaid chips in over 250 colours, and you will note the presence of suns, fish, birds and one of Chagall's favourite tropes, a pair of lovers. The mosaic also incorporates different images from Chicago's dramatic skyline, and Chagall continued to modify the design after its arrival in the Windy City. 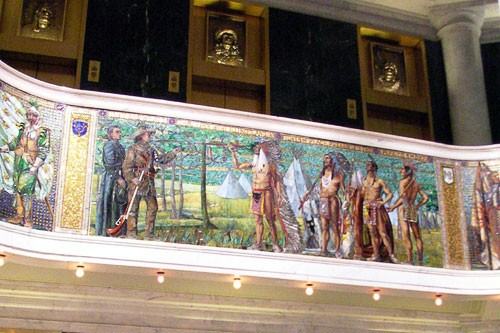 The Marquette Building at this busy corner is a landmark in its own right, built by the distinguished firm of Holabird & Roche between 1893 and 1895. Its brick and terracotta cladding make it stand out from its neighbours, and the bronze sculptures along the Dearborn Street side are mini-masterpieces depicting the travels of noted missionary and explorer Father Jacques Marquette. The bronze bas-reliefs were executed by Hermon Atkins MacNeil and include scenes from Marquette's travels in the late 17th century into 'strange lands,' which of course included the area that became Chicago. Step inside the building during business hours to take in the additional mosaics that depict even more scenes of French exploration and the bronze relief sculptures of various Native American leaders. 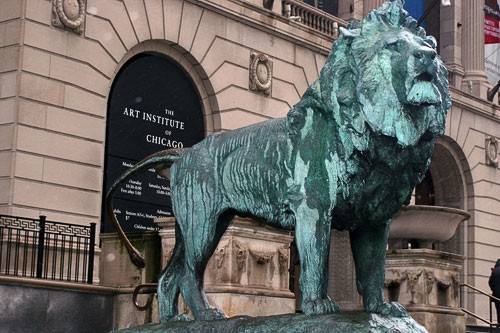 Frommers.com Community
Stop 7: Kemeys' Bronze Lions
Walk east along East Adams Street for three blocks to its intersection with South Michigan Avenue. Navigate the pedestrian crossing (crossway) to get to the east side of Michigan Avenue.

Standing watch over the Art Institute of Chicago are two bronze lions created by sculptor Edward L. Kemeys. The lions have been there since 1894 and they are periodically decked out in the regalia of Chicago's professional sports teams; during the holidays they will have wreaths placed around their necks. The building behind them -- Art Institute of Chicago -- isn't too shabby either, as it houses one of the world's premier art museums. Built in 1893 by the architectural firm of Shepley, Rutan & Coolidge, the neoclassical structure conveys a Gilded-Age sense of importance and permanence. It also happens to have a few very important works of art inside. 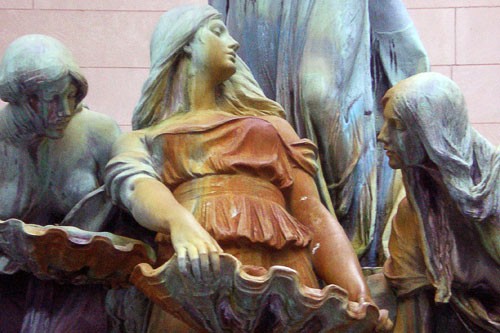 This fountain by Lorado Taft was created between 1907 and 1913 and depicts five women who are meant to represent the five Great Lakes: Superior, Michigan, Huron, Erie and Ontario. Taft was an instructor at the Art Institute of Chicago for many years, and his works grace other public spaces in the city, including his massive Fountain of Time along the Midway Plaisance in Hyde Park.