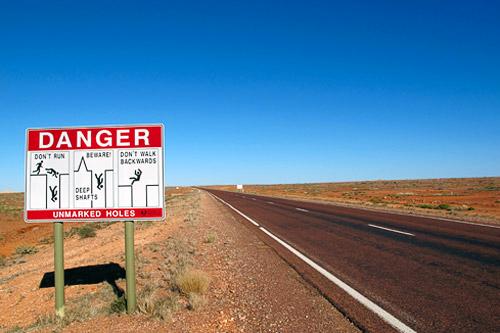 By Charis Atlas Heelan
Take a journey into the heart and soul of South Australia with an adventure in the Outback. Here are the 10 best moments and experiences in the South Australian Outback to add to your travel bucket list.

Photo Caption: The road through the Opal Fields to Coober Pedy. 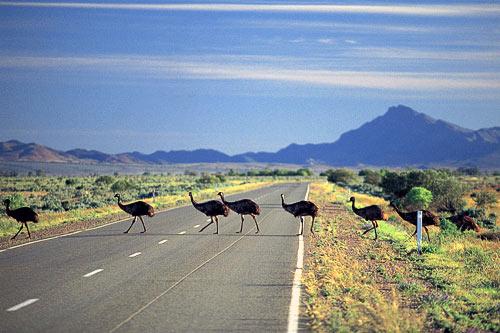 Adam Bruzzone
The Wildlife in South Australia
Animals in Australia are smart enough to know that coming out in the middle of the day isn't a great idea in the Outback, so sunrise and sunset are when you'll do your best wildlife spotting.

Watching a full-size adult male kangaroo bound across a field is mesmerizing, but seeing one as it hits your car bumper is not. Be particularly careful when driving, especially at dusk and at night.

Birds are prominent and highly audible, with screeching cockatoo varieties and galahs congregating around dry creek beds and eagles swooping over tree tops. Believe it or not, wild camels are prevalent (the ancestors of Afghan camels were brought over in the 19th century to help navigate and explore the country's massive interior spaces). Wild brumby horses are also common, as are lizards, emus, kangaroos, wallabies, and dingoes. 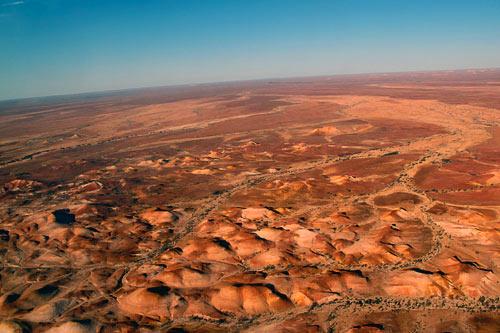 Among the desolate miles of open space, desert flowers carpet small sections of the ground when you least expect it, offering vibrant pools of purple, pink, red and yellow in the form of desert daisies, wattle, and parakelia.

From the air, you'll see an amazing view of the Anna Creek "Painted Hills," a series of dozens of 80 million-year-old monolithic outcrops that rise out of the otherwise flat, desert landscape. Here, the colors vary from crisp whites to deep blacks and contrasting ochres, reds, and browns. 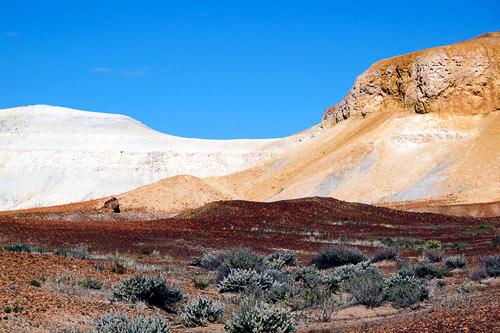 Charis Atlas Heelan
Coober Pedy & the Landscape
Even if you're not crazy about opals, the frontier town of Coober Pedy (the world's most prolific opal center) is a strangely marvelous place. In summer, sweltering temperatures reach over 100 degrees daily. For that reason, more than 50% of the population has chosen to build their homes underground in the natural sandstone earth mounds called dugouts, where the temperatures stay consistent and comfortable year-round.

Around 4,000 people call Coober home, and this little melting pot is made up of 50 nationalities. There are 40 opal stores, one pub, a handful of hotels, and two supermarkets, but that's about it.

Mining is the lifeblood of the town, with individuals claiming small mining stakes throughout the 2,000-square-mile area, and hundreds of thousands of small white sand mounds (resembling ant mounds) marking where mining shafts have been dug. When visiting the opal fields, remember to never step backwards as dangerous mine shafts are everywhere.

You can also drive 17 miles from Cooper Pedy (17 miles) to the Breakaways, a rocky landscape of flat-topped mesas with breathtaking colors and sunset vistas. 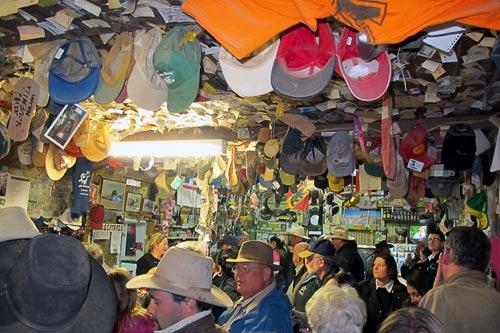 Charis Atlas Heelan
William Creek
The "dot on the map" town of William Creek is about halfway along the Oodnadatta Track, the historic trail that was the original trans-continental Ghan train line and Aboriginal trade route.

With a population of seven people, William Creek is considered Australia's smallest community. It has the pub, a scenic flight company with an air strip, and a motel/camping ground. The town's pub is an institution in these parts, like a movie set except that it's real. Built to service the bullock teams and camel trains that helped settle the land's interior, the pub dates back close to 125 years.

Despite the seemingly minute population, more than 100 people jammed into the pub on a recent Friday night. The walls and ceilings are decorated with thousands of mementoes left behind by visitors -- hats, photos, ATM cards, even driver's licenses. You could spend hours scouring the pub's interior and chatting with the fascinating patrons. 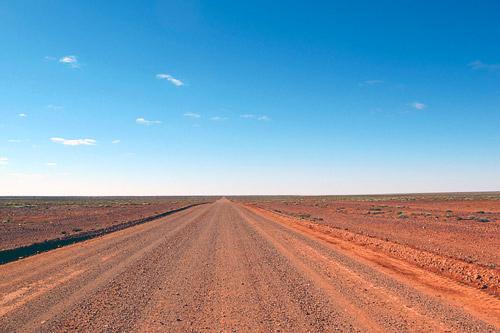 Charis Atlas Heelan
The Nothingness
By nothingness, I mean the absolute lack of everything that is annoying and irritating about your normal life. Apart from the "big smoke" of Coober Pedy and Marree, there is no cell phone signal, no Internet connection, no traffic, no supermarkets, no noise, and no distractions.

The serenity is all-encompassing, and you have no choice but to just relax, de-stress, and take in the sheer nothingness that is the Outback. Remoteness definitely has its advantages.

Photo Caption: Along the Oodnadatta Track in the South Australian Outback. 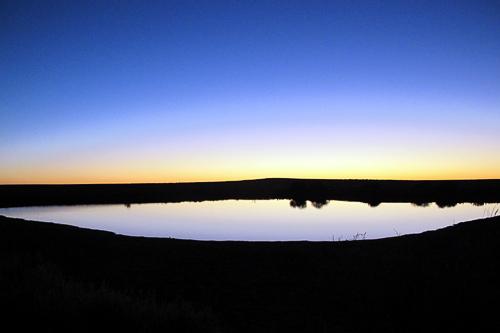 Charis Atlas Heelan
The Sky
Nowhere will you see a deeper, clearer sky than in the Outback, where no pollution or bright city lights obscure your view. The sun is extreme even in the dead of winter and both the sunrises and sunsets are natural miracles with a kaleidoscope of color and light.

When there are clouds, they form intricate patterns and create an added depth and texture to dusk. At night, the Southern Hemisphere skies are illuminated with a trillion galaxies of infinite clarity. Sitting around a campfire and enjoying nature's light show will be a highlight of your trip. 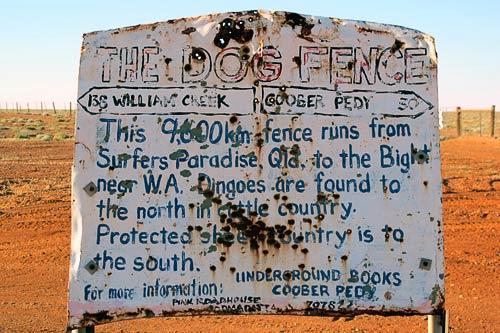 Charis Atlas Heelan
The Dog Fence
Wire-and-steel posts alone are hardly a tourist attraction, but you can't help but be amazed by the sheer length and breadth of the 3,355-mile-long Dog Fence. Stretching across three states, from Queensland in the north, over New South Wales, and through South Australia, the fence was designed to keep sheep and stock on one side and the wild dingoes on the other. To some extent, the project has been largely successful, but other animals, such as camels, tend to walk straight over it.

To this day, the government continues to employ people to continuously maintain and repair the fence. You can see large stretches of the fence as you drive out of Coober Pedy toward William Creek and the opal fields. 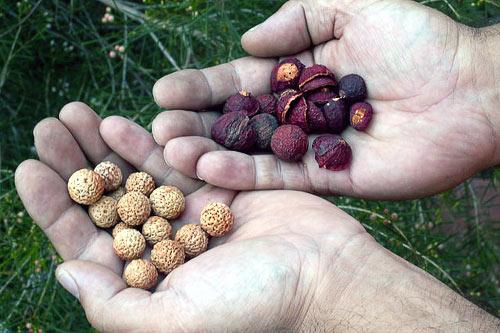 On my tour, our guide was Haydyn Bromley from Bookabee Tours (www.bookabee.com.au), a Flinders Ranges-based expert on indigenous Australian culture. Central to his philosophy is the sharing of his people's Yura Muda (stories of creation), which are passed down from Adnyamathanha community elders.

We sampled bush foods and learned about the hundreds of indigenous language groups that make up the Aboriginal people. I learned how to identify where the water is and how to use the wildlife and landscape to navigate. I also learned which plants were edible, which were medicinal, and which to avoid. 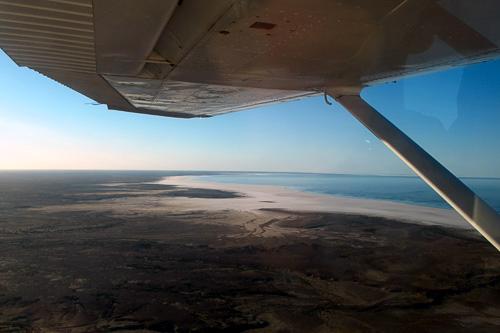 Charis Atlas Heelan
Lake Eyre
Right now, Lake Eyre is one of the most spectacular sights to behold. After decades of drought, Australia's largest inland lake -- and the world's largest salt lake -- is at its highest and most voluminous level in 20 years. (The lake is usually no more than a dry plain where the world's land speed record was set almost half a century ago.) The pelicans are back, feasting off the fish that make their way downstream all the way from Queensland, only to perish as they land in the overly salty water.

Wrightsair (www.wrightsair.com.au) conducts one-hour scenic flights over the region from its base in William Creek. Experienced pilots will introduce you to one of the natural wonders of the Outback from the air. 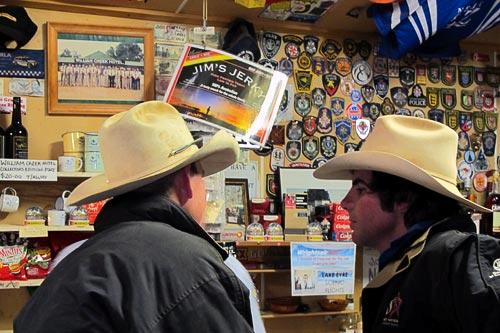 Charis Atlas Heelan
The Locals
Get to know the locals, who will want to "spin a yarn" (tell you a long story), and "shout you a beer" (pay for your beer). You can spot the cattleman by his (or her) permanently placed Akubra hat and well-worn RM Williams boots.

There's an honesty and integrity that comes with the hard work and perseverance required to live in such a remote area. Some are sixth-generation Australians, land owners, and cattlemen (and women) who have descended from a long line of pioneers. Others immigrated from Europe or Asia in search of opals or a better life in Australia, while the city folk left it all behind to pursue a different kind of Australian dream. Then there are the Aboriginal communities, who endured great hardship. Their resilience is a testament to their connection with the land. 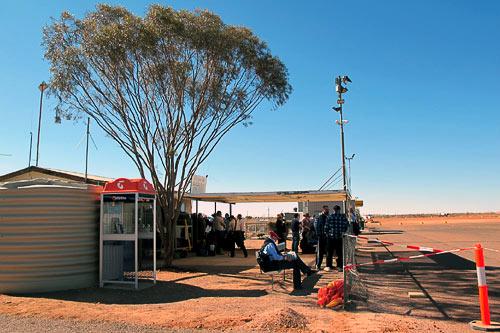 Charis Atlas Heelan
How to Get There
From the South Australian capital city of Adelaide to Coober Pedy, there is currently only one flight per day (except Saturdays) on Rex (Regional Express Airlines; www.rex.com.au). Round-trip flights start at A$408 (about $367), including taxes.

The flight takes about 90 minutes, and unlike most domestic airlines in the U.S., they'll even serve you snacks.

The Cooper Pedy airport is currently nothing more than a wooden and tin shed -- the man who checks you in is the same guy who directs the planes when they land. Luggage limits are strongly enforced: 15 kilograms (33 pounds) for checked bags and 7 kilograms (15 pounds) for hand luggage. Bon voyage!