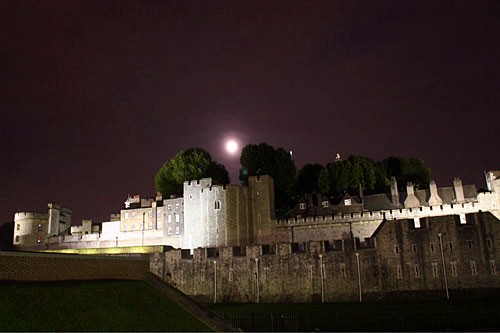 By Donald Strachan
On this walk you'll visit the principal site where public beheadings took place for more than 400 years and encounter a sinister-looking gate topped by stone skulls. The walk takes in the church where, after the ravages of the Great Fire of London, Samuel Pepys gazed down from the tower and witnessed a scene of utter desolation. It passes modern office blocks -- behind which creepy passageways recall days gone by -- and the gleaming modernity of the Lloyd's Insurance building. And, if all that isn't magical enough, you will also stroll through the beautiful Victorian market that is the location for Diagon Alley in the Harry Potter films. The final section of the walk takes you into a labyrinth of old alleyways through which you literally walk back in time. Here you will pass venerable old City eating houses, including the one where the infamous so-called Hellfire Club was founded, as you explore the alleyways where Charles Dickens began his most ghostly of tales, A Christmas Carol.

Photo Caption: Tower of London at Night. For an interesting bit of history, attend the Ceremony of the Key; the locking up of the Tower grounds. Photo by rmludwig/Frommers.com Community. 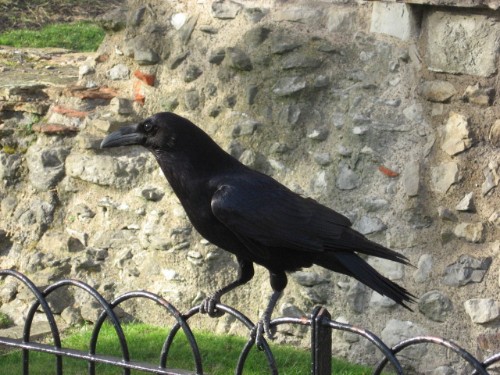 Frommers.com Community
Tower of London
Leave Tower Hill Underground Station and cross to Trinity Square Gardens. Veer left and follow the path as it swings right to pass the Mercantile Marine Memorial, paying homage to the 24,000 men of the Merchant Navy and Fishing Fleet who, during World War II, "gave their lives for their country and have no grave but the sea." Go up the three steps. On the right is the site of the ancient scaffold.

Between 1381 and 1747 more than 125 people were beheaded here. Sir Thomas More, Thomas Cromwell, Protector Somerset and the Earl of Monmouth are just a few of those who faced the immense crowds to whom these public spectacles proved an irresistible magnet. The last was the 80-year-old Jacobite, Lord Lovatt, executed here on 9 April 1747. He was astonished at the number of people who had come to watch him die. "God save us," he exclaimed, "why should there be such a bustle about taking off an old gray head?"

Turning to the executioner he noticed that the man appeared nervous, and said, "Cheer up thy heart man, I am not afraid. Why should you be?" Kneeling, he placed his head on the block, commended his soul to God, and became the last person to be beheaded in England. 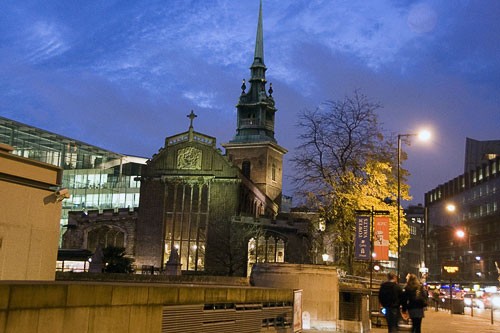 Through its doors have stepped the likes of Bishop Lancelot Andrews and William Penn, both of whom were christened here in 1555 and 1644 respectively. The infamous Judge Jeffries was married at the church in 1667, as was John Quincy Adams -- later sixth President of the United States -- in 1797. After the Great Fire of London in 1666, Samuel Pepys climbed to the top of its tower and, gazing down upon the smouldering remains below, declared it "the saddest sight of desolation." The ghost of a Victorian choirmistress haunts the church, and in December 1920 she attended a choir rehearsal and listened to Christmas carols before disappearing.

Photo Caption: All Hallows-by-the-Tower in London. Photo by Chris March/Flickr.com. 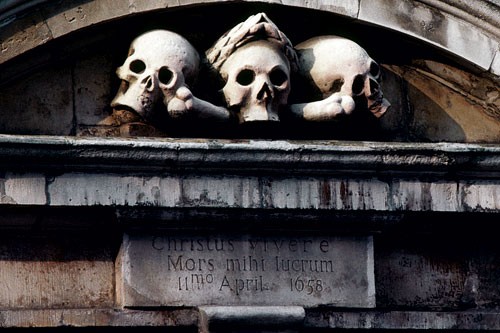 The Automobile Association
St. Olave's
Exit the church and go left along Byward Street. Cross the pedestrian crossing towards the Hung, Drawn and Quartered pub, named for the nearby executions. Cross Great Tower Street by the next crossing, swing right at the public toilets and take the first left into Seething Lane.

At the gardens on the right you'll see the bust of the diarist Samuel Pepys, which marks the site of the navy office where he began his career in 1660. At the end of Seething Lane on the left is the intriguing though decidedly gruesome-looking gateway of St Olave's, Hart Street (www.stolaveschurch.org.uk). Dating from the late 17th century, this gateway decorated with skulls, crossbones and ferocious spikes was intended to act as a deterrent to the body snatchers who might be tempted to rob the graves of those buried in the churchyard. 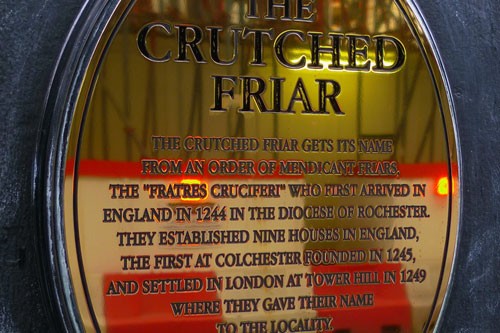 Ewan Munro
London
Go right along Crutched Friars, clock and the three lights that mark its which commemorates the House of the Friars of the Holy Cross that once stood here.

A brief history of it can be read on the wall of the Crutched Friar pub, a little way along on the left. They were known as the Crossed or Crux Friars, which over time became corrupted to the present name Crutched. 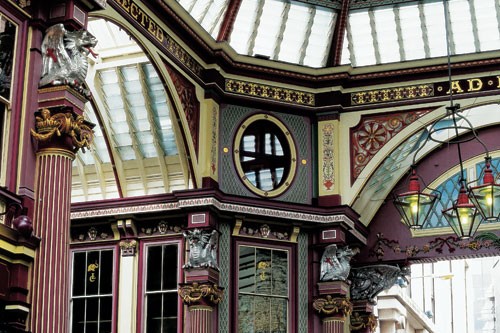 The Automobile Association
Leadenhall Market
A little further along turn left into the dimly lit French Ordinary Court, which is little more than a dark tunnel that burrows through gloomy arches and has a sinister ambience. Turn left at its far side and walk through the narrow St Katharine's row to emerge blinking into the daylight of Fenchurch Street where you turn left. Cross the crossing just past London Street and bear left then right into Fen Court. The chest tombs that you pass belonged to the now defunct churchyard of St Gabriel Fen Church. Go left along Fenchurch Avenue, left into Lime Street, turn right at the gleaming Lloyd's Building -- with its glass elevators and shiny steel exterior -- and keep ahead into the exquisite interior of Leadenhall Market.

Designed in 1881 by architect Horace Jones, Leadenhall Market is a place to wander at leisure and discover hidden shops, boutiques and delightful eateries. It recently became a star of the silver screen when it was used as the location for Diagon Alley in the film Harry Potter and the Philosopher's Stone. Beneath the centre, turn left to take the second right into Bull's Head Passage to the building with the blue exterior. This was used as the entrance to the Leaky Cauldron pub in the same film. 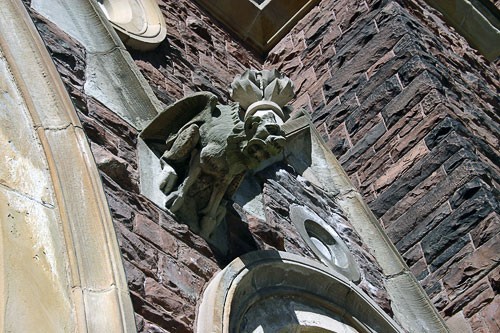 jofo2005
St. Peter's
At the end of Bull's Head Passage go right along Gracechurch Street, cross cautiously to its other side and just before ede and ravenscroft's clothing store go left into St Peter's Alley.

On the right is the church of St Peter upon Cornhill, reputedly the oldest Christian site in London dating back to AD 179, when it was founded by Lucius, the first Christian King of Britain. Follow the alley as it bears right then turn right along Cornhill to the front door of St Peter's. Look up at the building to its right and you'll see three terracotta demons grimacing back at you, their faces contorted with devilish hatred.

In the 19th century the building from which they look down was designed by an architect named Rentz. Unfortunately, he in advertently encroached on to church land and the vicar created such a fuss that Rentz was forced to revise his plans. The gremlins were his revenge and the face of the most ferocious one is said to be that of the vicar. 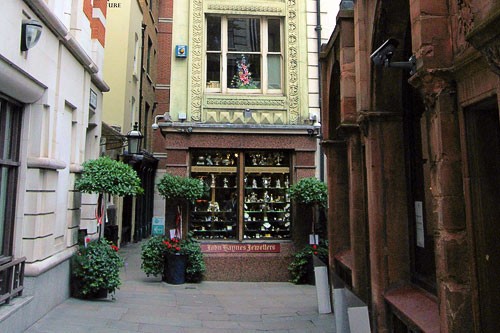 It was in this vicinity that Dickens set Scrooge's Counting House in A Christmas Carol. Keep ahead through the dark passageway that passes the George and Vulture pub, which was established in 1600 and is the place where the first meeting of the Brotherhood of St Francis of Wycombe (universally known as Sir Francis Dashwood's Hellfire Club) allegedly took place in May 1746.