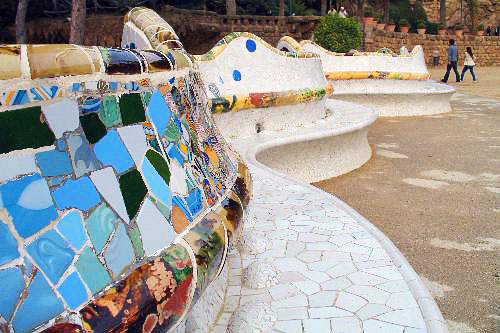 Parc Güell is one of the city's magical spots, where Gaudí unleashes a playful, humorous side that some of his darker creations partially conceal. Gaudí and his patron Count Eusebi Güell (1846-1918) developed Parc Güell between 1900 and 1914. Güell thought the project would attract Barcelona's wealthiest families to leave the city hubbub in favour of the peace and quiet of a secluded garden community in the hills.

Luckily for Parc Güell's many visitors over the last century, the Barcelona bourgeoisie showed little interest in moving further away from the social and cultural resources of downtown Barcelona, a tendency that persists, at least partially, to this day. Inspired by the British Mayfair Garden suburbs (the English spelling for the word Park is original and deliberate), 60 plots were to be sold for single family homes. Only two houses were standing when in 1923 the municipal authorities were given the park by the Güell family. Everything in it is singular: the gingerbread gatehouses, the psychedelic lizard, the market with 86 leaning columns, the slanted corridor under leaning tree trunks, the undulating bench, and the Gaudí house, now a museum. 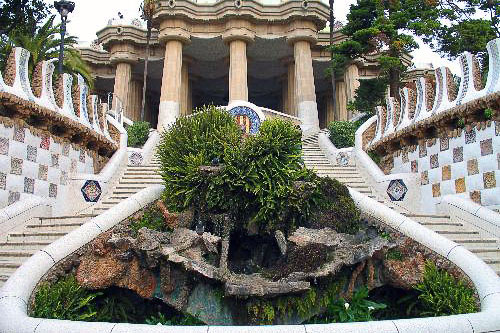 John Troynousky
The Entrance
From Plaça de Lesseps walk west along the bottom of the square before cutting into Carrer de Santa Perpètua in upper Grácia.Turn up to Travessera de Dalt on Carrer Verdi and walk right for five minutes to the corner of Carrer de Larrard.Turn left and walk a steep 15 minutes to the entrance to Parc Güell on Carrer d'Olot.

Plaça de Lesseps is named for Ferdinand de Lesseps, engineer of the Suez and Panama canals, a Barcelona hero from the year 1842, when, as Consul-General of France, he saved many people during a violent uprising, ending with the bombardment of the city by Madrid forces. Carrer Larrard is punctuated with one-family torres (towers), as small separate houses are called in Barcelona. The entryway into Parc Güell has two small gatehouses on either side, topped with 'wild mushrooms,' on the right the red, white-specked fly ammanite of Alice in Wonderland fame, and on the left, the Phallus impudicus, a remarkably priapic mushroom that sprouts and disappears within a few hours. 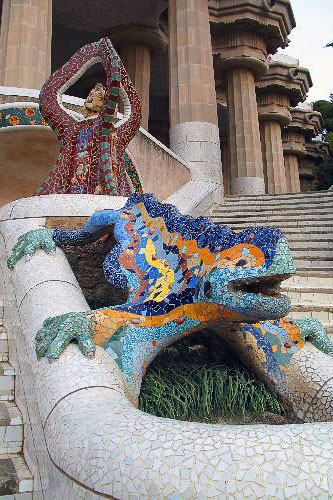 John Troynousky
The Mosaic Lizard & Columns
Walk directly ahead up the staircase by the kaleidoscopic lizard and into the forest of leaning columns at the top of the steps.

The famous Gaudí lizard, like much of the most playful work in Parc Güell, was done in collaboration with Josep Maria Jujol (1879-1949), a fellow Moderniste architect. This lizard or dragon is another reference to the St George and dragon legend that appears throughout Barcelona's Moderniste statuary. Behind the dragon-lizard is the quatre barres, the four bars of the Catalan flag. At the top of the steps, 86 leaning Doric columns support the esplanade above. This area was designed as a covered produce market for the 60 families of the original garden community,and now provides shelter and acoustics for the musicians who play here. 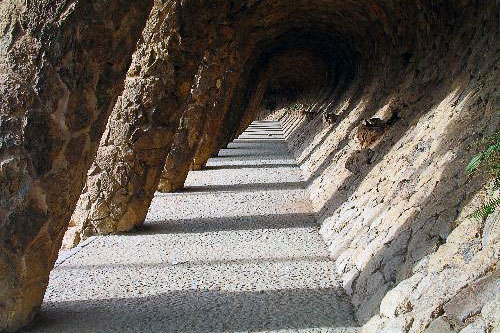 John Troynousky
The Washerwoman's Corridor
Walk to the left and climb the stairway up to the beginning of the covered corridor that can be seen curving out to the left.

The so-called bugadera (washerwoman) covered corridor is lined with leaning tree-like columns made of stone and earth from the park. The effect is a trompe l'oeil slant under a tear-shaped overhead arch. On a column at the end of the corridor is the washerwoman herself with a large vat of laundry on her head. 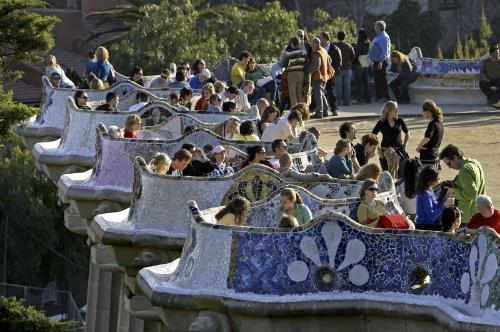 Quim Roser/Puig Photography
The Serpentine Bench
Walk back to the start of the corridor and up to the wide esplanade with the undulating ceramic bench curving around the Mediterranean side of the square.

The serpentine bench ringing this open space is one of Gaudí's most iconic elements even though it is well known that the young Josep Maria Jujol was the architect who put it together. Using the technique of trencadis, or broken bits of tile (trencar means "to break" in Catalan), Jujol designed an undulating bench that is particularly spectacular, as is all of Parc Güell, when the sun is high or waning and its colours and the city below (and the Mediterranean beyond) are illuminated from the west. 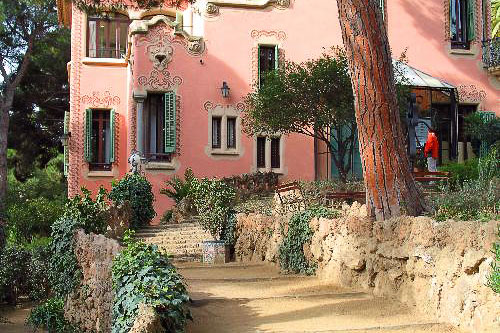 John Troynousky
Gaudi's Home
Walk around the esplanade to the cafés and ice cream stand at its base and turn right towards the Casa-Museu Gaudí visible north of the Jujol Bench.

The salmon-coloured chalet a few steps to the right is the house where Gaudí lived for 20 years with his niece. Built by Francesc Berenguer i Mestres (1866-1914), his right-hand man and foreman, this little chalet is filled with Gaudí memorabilia and photographs. Never successful in his love life (his tendency to obsession apparently scared love objects away), Gaudí himself affirmed that he had "no vocation for married life." No one, especially the Catholic right that is working hard to have Gaudí canonized, has ever suggested that Gaudí's relationship with his niece was anything more than an alliance of convenience.

Berenguer i Mestres, on the other hand, was pressed into Gaudí's service in part through his own marital successes (seven children). Berenguer, needing to support his rapidly growing family, dropped out of architecture school and signed on with Gaudí while in his 20s, becoming indispensable to Gaudí's productivity. After Berenguer's death in 1914, Gaudí worked only on his Sagrada Familia project, making little progress. 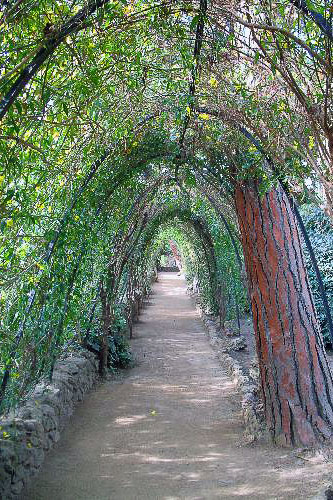 John Troynousky
Barcelona
Walk down and to the right from Casa-Museu Gaudí and continue through the usually flower-bedecked gardens back to the entrance.

The lush lower part of Parc Güell is the prettiest, with lovers spread out in the grass and picnics commonplace. A walk down into upper Grácia along Carrer Torrent de les Flors will lead to Bodega Manolo and other Grácia restaurants, whereas a taxi a little further north will reach Can Cortada in under 10 minutes. The Plaça de Lesseps metro station is a 20-minute walk downhill.

Photo Caption: Some of the nooks and crannies of Parc Güell take on a fairytale quality.
Arts and Culture
Local Experiences
Outdoor & Adventure
Student